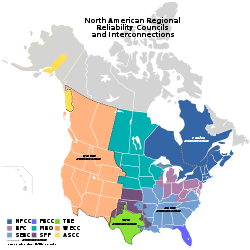 The Québec Interconnection covers all of the Province of Québec
Quebec
Quebec or is a province in east-central Canada. It is the only Canadian province with a predominantly French-speaking population and the only one whose sole official language is French at the provincial level....
and operates at an average system frequency of 60 Hz. It is not technically an "interconnection" in the sense of having multiple synchronized systems, because it contains only one electric utility company: Hydro-Québec
Hydro-Québec
Hydro-Québec is a government-owned public utility established in 1944 by the Government of Quebec. Based in Montreal, the company is in charge of the generation, transmission and distribution of electricity across Quebec....
. Nonetheless it is operated as an independent AC grid for physical reasons. Because of its unique status, it is often functionally considered part of the Eastern Interconnection.