Encyclopedia
Pucón is a Chile
Chile
Chile ,officially the Republic of Chile , is a country in South America occupying a long, narrow coastal strip between the Andes mountains to the east and the Pacific Ocean to the west. It borders Peru to the north, Bolivia to the northeast, Argentina to the east, and the Drake Passage in the far...
an city and commune administered by the municipality of Pucón located in the Province of Cautín
Cautín Province
Cautín Province is one of two provinces in the southern Chilean region of Araucanía , bounded on the north by Arauco and Malleco provinces, on the east by Argentina, on the south by Valdivia Province, and on the west by the Pacific Ocean. Its population at the 2002 census was of 667,920. The most...
, Araucanía Region
Araucanía Region
The IX Araucanía Region is one of Chile's 15 first order administrative divisions and comprises two provinces: Malleco in the north and Cautín in the south....
, 100 km to the southeast of Temuco
Temuco
Temuco is a city and commune, capital of the Cautín Province and of the Araucanía Region in southern Chile. The name comes from the Mapudungun language, meaning "temu water"; "temu" is a tree used by Mapuches for medicinal purposes. The city is located 670 km south of Santiago...
and 780 km to the south of Santiago
Santiago
Santiago is the capital city of Chile. Santiago may also refer to:*Santiago *Santiago , a Spanish given name*Santiago!, a shortened form of the Reconquista battle cry "Santiago y cierra, España"...
.

Pucón's unrivaled location by a lake and a volcano and quite stable weather (especially in the summer) make it a popular destination for tourists. It offers a variety of sports and adventure/recreational activities for tourists, including water skiing
Water skiing
thumb|right|A slalom skier making a turn on a slalom waterski.Waterskiing is a sport where an individual is pulled behind a boat or a cable ski installation on a body of water, skimming the surface.-History:...
, snow skiing, backpacking
Backpacking (wilderness)
Backpacking combines the activities of hiking and camping for an overnight stay in backcountry wilderness...
, white water rafting
Rafting
Rafting or white water rafting is a challenging recreational outdoor activity using an inflatable raft to navigate a river or other bodies of water. This is usually done on white water or different degrees of rough water, in order to thrill and excite the raft passengers. The development of this...
and kayaking
Kayaking
Kayaking is the use of a kayak for moving across water. Kayaking and canoeing are also known as paddling. Kayaking is distinguished from canoeing by the sitting position of the paddler and the number of blades on the paddle...
, horse back riding, natural hot springs
Hot Springs
Hot Springs may refer to:* Hot Springs, Arkansas** Hot Springs National Park, Arkansas*Hot Springs, California**Hot Springs, Lassen County, California**Hot Springs, Modoc County, California**Hot Springs, Placer County, California...
, zip line rides, and guided ascents of Villarrica volcano
Villarrica (volcano)
Villarrica is one of Chile's most active volcanoes, rising above the lake and town of the same name. The volcano is also known as Rucapillán, a Mapuche word meaning "House of the Pillán". It is the westernmost of three large stratovolcanoes that trend perpendicular to the Andean chain along the...
.

Pucón was established in 1883 as a fort in the aftermath of the Occupation of Araucanía when the Chilean state subdued the native population of Araucanía
Araucanía Region
The IX Araucanía Region is one of Chile's 15 first order administrative divisions and comprises two provinces: Malleco in the north and Cautín in the south....
. The location of Pucón was found strategic because of being at the entrance to the Trancura Valley
Trancura River
Trancura River is a river located in the Araucanía Region of Chile. Its headwaters drain the southeasternmost portion of Villarrica National Park, including the northwestern slope of Lanín volcano...
, a place that had become of the authorities' awareness since the Argentine army had chased a group of Mapuches into it though Mamuil Malal Pass
Mamuil Malal Pass
Mamuil Malal Pass is an international mountain pass in the Andes between Chile and Argentina. The pass connects Pucón and Curarrehue in Chile with Junín de los Andes in Argentina. The road is paved on the Argentinian side and passes just north of Lanín Volcano . During winter the pass may close...
during the Conquest of the Desert
Conquest of the Desert
The Conquest of the Desert was a military campaign directed mainly by General Julio Argentino Roca in the 1870s, which established Argentine dominance over Patagonia, which was inhabited by indigenous peoples...
.

The first hotel in Pucón was Gudenschwager established in 1923, but it was in 1934 with the establishment of Gran Hotel Pucón that tourism became a popular activity in the zone. In 1940 the first road between Villarrica and Pucón was built and in the 1970s the road to Caburga Lake was finished.

According to the 2002 census
Census
A census is the procedure of systematically acquiring and recording information about the members of a given population. It is a regularly occurring and official count of a particular population. The term is used mostly in connection with national population and housing censuses; other common...
of the National Statistics Institute
National Statistics Institute (Chile)
The National Statistics Institute of Chile is a state-run organization of the Government of Chile, created in the second half of the 19th century and tasked with performing a general census of population and housing, then collecting, producing and publishing official demographic statistics of...
, Pucón spans an area of 1248.5 sqkm and has 21,107 inhabitants (10,705 men and 10,402 women). Of these, 13,837 (65.6%) lived in urban area
Urban area
An urban area is characterized by higher population density and vast human features in comparison to areas surrounding it. Urban areas may be cities, towns or conurbations, but the term is not commonly extended to rural settlements such as villages and hamlets.Urban areas are created and further...
s and 7,270 (34.4%) in rural areas. The population grew by 47% (6,751 persons) between the 1992 and 2002 censuses.

Pucón is a major centre of adventure tourism in Chile. During the summer, tourist attractions include hiking, rafting, horse back riding, birdwatching, fishing and canopy. Due to its privileged natural surroundings, near a volcano and several lakes, nature reserves and thermal baths, Pucón is a destination which can rely on tourism all year round. In winter and spring, it is possible to go skiing or snowboarding on the trails of the Villarrica volcano. 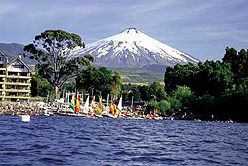 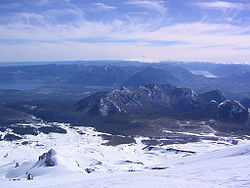 As a commune, Pucón is a third-level administrative division of Chile administered by a municipal council
Municipal council
A municipal council is the local government of a municipality. Specifically the term can refer to the institutions of various countries that can be translated by this term...
, headed by an alcalde
Alcalde
Alcalde , or Alcalde ordinario, is the traditional Spanish municipal magistrate, who had both judicial and administrative functions. An alcalde was, in the absence of a corregidor, the presiding officer of the Castilian cabildo and judge of first instance of a town...
who is directly elected every four years. The 2008-2012 alcalde is Edita Mansilla Barría (PPD
Party for Democracy
The Party for Democracy is a political party in Chile; it is social democratic in its political orientation. It was founded in December 1987 by Ricardo Lagos, who aimed at forming a legal social democratic party . The party continued to function after the defeat of Pinochet...
).

Pucon, Chile - Online Travel guide. Web and Mobile. PuconChile.com Municipality of Pucón Tourism info, history and webcams. PuconOnline.cl
The source of this article is wikipedia, the free encyclopedia.  The text of this article is licensed under the GFDL.