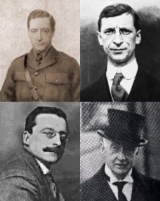 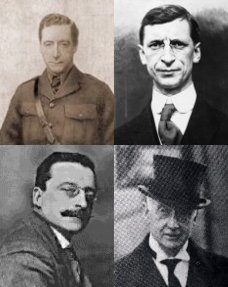 The President of Dáil Éireann was the leader of the revolutionary Irish Republic
Irish Republic
The Irish Republic was a revolutionary state that declared its independence from Great Britain in January 1919. It established a legislature , a government , a court system and a police force...
of 1919–1921. The office, also known as Príomh Aire (ˈpʲrʲiːv ˈarʲə), was created in the Dáil Constitution
Dáil Constitution
The Constitution of Dáil Éireann , more commonly known as the Dáil Constitution, was the constitution of the 1919–22 Irish Republic. It was adopted by the First Dáil at its first meeting on 21 January 1919 and theoretically remained in force for four years. As adopted it consisted of only five...
adopted by Dáil Éireann
Dáil Éireann (1919-1922)
Dáil Éireann was the revolutionary, unicameral parliament of the unilaterally declared Irish Republic from 1919–1922. The Dáil was first formed by 73 Sinn Féin MPs elected in the 1918 United Kingdom general election. Their manifesto refused to recognise the British parliament at Westminster and...
, the parliament of the Republic, at its first meeting in January 1919. This provided that the President was elected by the Dáil as head of a cabinet called the 'Ministry
Aireacht
The Aireacht or Ministry was the cabinet of the 1919–1922 Irish Republic. The Ministry was originally established by the Dáil Constitution adopted by the First Dáil in 1919, after it issued the Irish Declaration of Independence...
'. During the period of the Republic there were two office-holders, Cathal Brugha
Cathal Brugha
Cathal Brugha was an Irish revolutionary and politician, active in the Easter Rising, Irish War of Independence, and the Irish Civil War and was the first Ceann Comhairle of Dáil Éireann.-Background:...
(on a provisional basis) and Éamon de Valera
Éamon de Valera
Éamon de Valera was one of the dominant political figures in twentieth century Ireland, serving as head of government of the Irish Free State and head of government and head of state of Ireland...
.

As adopted, the Dáil Constitution deliberately did not provide for a head of state
Head of State
A head of state is the individual that serves as the chief public representative of a monarchy, republic, federation, commonwealth or other kind of state. His or her role generally includes legitimizing the state and exercising the political powers, functions, and duties granted to the head of...
and the titles initially used all suggested an official who was merely the head of government
Head of government
Head of government is the chief officer of the executive branch of a government, often presiding over a cabinet. In a parliamentary system, the head of government is often styled prime minister, chief minister, premier, etc...
.

In practice, de Valera, particularly when abroad, called himself "President de Valera", creating the impression that he was head of state. In August 1922 in the run-up to the negotiations that would produce the Anglo-Irish Treaty, de Valera asked the Dáil to amend the constitution to upgrade his official status to that of head of state, in part to give him equality with King George V of the United Kingdom
George V of the United Kingdom
George V was King of the United Kingdom and the British Dominions, and Emperor of India, from 6 May 1910 through the First World War until his death in 1936....
in accrediting delegates to the negotiations. He also had the ministry restructured, with a number of offices downgraded from cabinet to sub-cabinet level.

He also maintained that, as the highest official in the Republic, the Príomh Aire was the de facto head of state and that an amendment would merely bring the language of the constitution into harmony with this reality. It was first suggested that the constitution be amended to explicitly use the term President of the Republic. However, because of opposition to this, a more ambiguously worded amendment was adopted referring to the office-holder as "the President who shall also be Prime Minister". After the adoption of this amendment de Valera was elected as "President of the Republic" and continued to use the title until he resigned in January 1922. However his two successors were both elected–and known–as "Presidents of Dáil Éireann", although no further amendment had been made to the constitution.

In April 1919 a constitutional amendment was adopted providing for a form of vice presidency
Vice president
A vice president is an officer in government or business who is below a president in rank. The name comes from the Latin vice meaning 'in place of'. In some countries, the vice president is called the deputy president...
. The President was granted power to appoint a 'President-Substitute' or 'Deputy President' who would carry out his duties on a temporary basis if he was unable to discharge them. On 17 June de Valera appointed Griffith–then the Minister for Home Affairs–as Deputy President so that he could take de Valera's place until he returned from the United States.

When the First Dáil
First Dáil
The First Dáil was Dáil Éireann as it convened from 1919–1921. In 1919 candidates who had been elected in the Westminster elections of 1918 refused to recognise the Parliament of the United Kingdom and instead assembled as a unicameral, revolutionary parliament called "Dáil Éireann"...
met in 1919 Eamon de Valera was the president of Sinn Féin
Sinn Féin
Sinn Féin is a left wing, Irish republican political party in Ireland. The name is Irish for "ourselves" or "we ourselves", although it is frequently mistranslated as "ourselves alone". Originating in the Sinn Féin organisation founded in 1905 by Arthur Griffith, it took its current form in 1970...
and thus the natural choice for leadership. However he had been imprisoned in England
England
England is a country that is part of the United Kingdom. It shares land borders with Scotland to the north and Wales to the west; the Irish Sea is to the north west, the Celtic Sea to the south west, with the North Sea to the east and the English Channel to the south separating it from continental...
so, at the second meeting of the Dáil on 22 January, Cathal Brugha
Cathal Brugha
Cathal Brugha was an Irish revolutionary and politician, active in the Easter Rising, Irish War of Independence, and the Irish Civil War and was the first Ceann Comhairle of Dáil Éireann.-Background:...
was elected as the first Príomh Aire on a temporary basis. De Valera escaped Lincoln Gaol in February and so was elected to replace Brugha at the Dáil's third meeting on 1 April. As leader de Valera visited the United States from June 1919 to December 1920. His aim was to gain both popular and official recognition for the Republic, and to float a loan to finance Dáil Éireann and the War of Independence. By his return de Valera had won public but not official support for the Republic and had raised a loan of $6 million.

After the election of the Second Dáil
Second Dáil
The Second Dáil was Dáil Éireann as it convened from 16 August 1921 until 8 June 1922. From 1919–1922 Dáil Éireann was the revolutionary parliament of the self-proclaimed Irish Republic. The Second Dáil consisted of members elected in 1921...
in 1921 de Valera resigned on 26 August and was immediately re-elected, under the new title of President of the Republic
President of the Irish Republic
President of the Republic was the title given to the head of the Irish ministry or Aireacht in August 1921 by an amendment to the Dáil Constitution, which replaced the previous title, Príomh Aire or President of Dáil Éireann...
. He then remained in office until January 1922 when, against his wishes, the Dáil voted to ratify the Anglo-Irish Treaty
Anglo-Irish Treaty
The Anglo-Irish Treaty , officially called the Articles of Agreement for a Treaty Between Great Britain and Ireland, was a treaty between the Government of the United Kingdom of Great Britain and Ireland and representatives of the secessionist Irish Republic that concluded the Irish War of...
. De Valera resigned and submitted his name for re-election but was rejected by the house, which instead elected Arthur Griffith, who supported the Treaty.