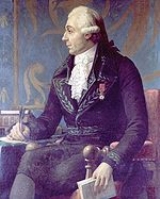 Encyclopedia
Pierre François André Méchain (16 August 1744 – 20 September 1804) was a French
France
The French Republic , The French Republic , The French Republic , (commonly known as France , is a unitary semi-presidential republic in Western Europe with several overseas territories and islands located on other continents and in the Indian, Pacific, and Atlantic oceans. Metropolitan France...
astronomer
Astronomer
An astronomer is a scientist who studies celestial bodies such as planets, stars and galaxies.Historically, astronomy was more concerned with the classification and description of phenomena in the sky, while astrophysics attempted to explain these phenomena and the differences between them using...
and surveyor
Surveying
See Also: Public Land Survey SystemSurveying or land surveying is the technique, profession, and science of accurately determining the terrestrial or three-dimensional position of points and the distances and angles between them...
who, with Charles Messier
Charles Messier
Charles Messier was a French astronomer most notable for publishing an astronomical catalogue consisting of deep sky objects such as nebulae and star clusters that came to be known as the 110 "Messier objects"...
, was a major contributor to the early study of deep sky objects and comets.

Pierre Méchain was born in Laon
Laon
Laon is the capital city of the Aisne department in Picardy in northern France.-History:The hilly district of Laon, which rises a hundred metres above the otherwise flat Picardy plain, has always held strategic importance...
, the son of the ceiling designer and plasterer Pierre François Méchain. He displayed mental gifts in mathematics
Mathematics
Mathematics is the study of quantity, space, structure, and change. Mathematicians seek out patterns and formulate new conjectures. Mathematicians resolve the truth or falsity of conjectures by mathematical proofs, which are arguments sufficient to convince other mathematicians of their validity...
and physics
Physics
Physics is a natural science that involves the study of matter and its motion through spacetime, along with related concepts such as energy and force. More broadly, it is the general analysis of nature, conducted in order to understand how the universe behaves.Physics is one of the oldest academic...
but had to give up his studies for lack of money. However, his talents in astronomy
Astronomy
Astronomy is a natural science that deals with the study of celestial objects and phenomena that originate outside the atmosphere of Earth...
were noticed by Joseph Jérôme Lalande, for whom he became a friend and proof-reader. Lalande then secured a position for him with the Naval Depot of Maps at Versailles
Versailles
Versailles , a city renowned for its château, the Palace of Versailles, was the de facto capital of the kingdom of France for over a century, from 1682 to 1789. It is now a wealthy suburb of Paris and remains an important administrative and judicial centre...
, where he worked through the 1770s engaged in hydrographic
Hydrography
Hydrography is the measurement of the depths, the tides and currents of a body of water and establishment of the sea, river or lake bed topography and morphology. Normally and historically for the purpose of charting a body of water for the safe navigation of shipping...
work and coastline surveying. It was during this time—approximately 1774—that he met Charles Messier, with whom he also became friends. In this year he also produced his first astronomical work, a paper on an occultation of Aldebaran
Aldebaran
Aldebaran is a red giant star located about 65 light years away in the zodiac constellation of Taurus. With an average apparent magnitude of 0.87 it is the brightest star in the constellation and is one of the brightest stars in the nighttime sky...
by the Moon
Moon
The Moon is Earth's only known natural satellite,There are a number of near-Earth asteroids including 3753 Cruithne that are co-orbital with Earth: their orbits bring them close to Earth for periods of time but then alter in the long term . These are quasi-satellites and not true moons. For more...
.

Continuing doubts about his measurements of the Dunkirk-Barcelona arc led him to return to that work. This took him back to Spain
Spain
Spain , officially the Kingdom of Spain languages]] under the European Charter for Regional or Minority Languages. In each of these, Spain's official name is as follows:;;;;;;), is a country and member state of the European Union located in southwestern Europe on the Iberian Peninsula...
in 1804, where he caught yellow fever
Yellow fever
Yellow fever is an acute viral hemorrhagic disease. The virus is a 40 to 50 nm enveloped RNA virus with positive sense of the Flaviviridae family....
and died in Castellon de la Plana
Castellón de la Plana
Castellón de la Plana or Castelló de la Plana is the capital city of the province of Castelló, in the Valencian Community, Spain, in the east of the Iberian Peninsula, on the Costa del Azahar by the Mediterranean Sea...
.

Méchain discovered either 26 or 27 deep-sky objects, depending on how one counts M102. Eighteen of these were included in the Messier catalog:

One other Messier object can be attributed to him, M102. However, Méchain specifically disavowed the observation from 1783 onwards as a mistaken re-observation of M101. Since that time, others have proposed that he did in fact observe another object, and suggested what they might be. See the discussion The M102 Controversy for more details.

Interestingly, Méchain never set out to observe deep-sky objects. Like Messier, he was solely interested in cataloging objects that might be mistaken for comets; having done so, he was the second-most successful discoverer of comets of his time, after Messier himself.

Altogether, he discovered nine comets either alone or in combination with Messier . His sole discoveries are:


His co-discovery with Messier was C/1785 A1 (Messier-Mechain), former designation 1785 I. Note that only the two named comets have been connected to periodic comets that have computed orbits and in neither case was he an observer when they were computed, so by that technical definition (commonly used for comets since the 19th century) Méchain did not discover any of these nine.