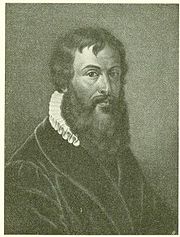 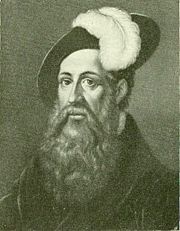 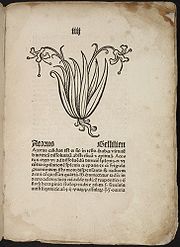 Peter Schöffer or Petrus Schoeffer (c. 1425 in Gernsheim
Gernsheim
Gernsheim is a town in Groß-Gerau district and Darmstadt region in Hesse, Germany, lying on the Rhine.-Location:The Schöfferstadt Gernsheim, as Gernsheim may officially call itself – it was Peter Schöffer's birthplace – lies 18 km southwest of Darmstadt and 16 km northeast of Worms, right...
, Groß-Gerau
Groß-Gerau (district)
Groß-Gerau is a Kreis in the south of Hesse , Germany. Neighboring districts are Main-Taunus, district-free Frankfurt, Darmstadt-Dieburg, Bergstraße, Alzey-Worms, Mainz-Bingen, and the district-free cities Mainz and Wiesbaden....
- 1503 Mainz
Mainz
Mainz under the Holy Roman Empire, and previously was a Roman fort city which commanded the west bank of the Rhine and formed part of the northernmost frontier of the Roman Empire...
) was an early German printer, who studied in Paris
Paris
Paris is the capital and largest city in France, situated on the river Seine, in northern France, at the heart of the Île-de-France region...
and worked as a manuscript copyist in 1451 before apprenticing with Johannes Gutenberg and joining Johann Fust
Johann Fust
Johann Fust was an early German printer.- Family background :Fust belonged to a rich and respectable burgher family of Mainz, traceable back to the early thirteenth-century; members of the family held many civil and religious offices.The name was always written Fust, but in 1506 Peter Schöffer, in...
, a goldsmith, lawyer, and money lender.

Working for Fust, Schöffer was the principal workman of Johannes Gutenberg, inventor of modern typography
Typography
Typography is the art and technique of arranging type in order to make language visible. The arrangement of type involves the selection of typefaces, point size, line length, leading , adjusting the spaces between groups of letters and adjusting the space between pairs of letters...
, whose 42-Line Bible
Gutenberg Bible
The Gutenberg Bible was the first major book printed with a movable type printing press, and marked the start of the "Gutenberg Revolution" and the age of the printed book. Widely praised for its high aesthetic and artistic qualities, the book has an iconic status...
was completed in 1455. In 1455 he testified for Johann Fust against Gutenberg. By 1457 he and Fust had formed the firm Fust and Schöffer, after the foreclosure of the mortgage on Gutenberg's printing workshop.

Famous works include the Latin Psalter of 1457, Cicero's De officiis (1465), and Herbarius - Rogatu plurimorum... (1484), usually referred to as the "Herbarius latinus". The Herbarius was compiled from older sources and was popular enough to go through ten reprints before 1499. It illustrates and describes 150 plants and 96 medicines commonly found in apothecaries. There is reason to believe that Schöffer himself commissioned the compilation, although the name of the compiler is not recorded. Schöffer is considered the author of many innovations such as dating books, introducing the printer's device and Greek characters in print, developing the basics of punchcutting
Punchcutting
In traditional typography, punchcutting is the craft of cutting letter punches in steel from which matrices were made in copper for type founding in the letterpress era. Cutting punches and casting type was the first step of traditional typesetting. The cutting of letter punches was a highly...
and type-founding
Type foundry
A type foundry is a company that designs or distributes typefaces. Originally, type foundries manufactured and sold metal and wood typefaces and matrices for line-casting machines like the Linotype and Monotype machines designed to be printed on letterpress printers...
, and using colored inks in print. After going into business on his own, Schöffer confined his publishing to works on theology, and civil and ecclesiastical law.

Schöfferhofer is a brand of German wheat beer named for the former house of Peter Schöffer (the house was called the Mainzer Schöfferhof) in which a brewery
Brewery
A brewery is a dedicated building for the making of beer, though beer can be made at home, and has been for much of beer's history. A company which makes beer is called either a brewery or a brewing company....
was founded. This brand of beer sports a portrait of Peter Schöfferhofer as its trademark. The Schöfferhofer brand originates from this brewery in Mainz
Mainz
Mainz under the Holy Roman Empire, and previously was a Roman fort city which commanded the west bank of the Rhine and formed part of the northernmost frontier of the Roman Empire...
, which is also known as the Brauerei Dreikönigshof.