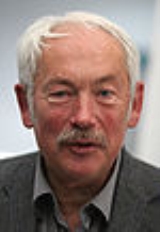 Encyclopedia
Peter Andreas Grünberg is a German
Germany
Germany , officially the Federal Republic of Germany , is a federal parliamentary republic in Europe. The country consists of 16 states while the capital and largest city is Berlin. Germany covers an area of 357,021 km2 and has a largely temperate seasonal climate...
physicist
Physicist
A physicist is a scientist who studies or practices physics. Physicists study a wide range of physical phenomena in many branches of physics spanning all length scales: from sub-atomic particles of which all ordinary matter is made to the behavior of the material Universe as a whole...
, and Nobel Prize in Physics
Nobel Prize in Physics
The Nobel Prize in Physics is awarded once a year by the Royal Swedish Academy of Sciences. It is one of the five Nobel Prizes established by the will of Alfred Nobel in 1895 and awarded since 1901; the others are the Nobel Prize in Chemistry, Nobel Prize in Literature, Nobel Peace Prize, and...
laureate for his discovery with Albert Fert
Albert Fert
Albert Fert is a French physicist and one of the discoverers of giant magnetoresistance which brought about a breakthrough in gigabyte hard disks...
of giant magnetoresistance which brought about a breakthrough in gigabyte
Gigabyte
The gigabyte is a multiple of the unit byte for digital information storage. The prefix giga means 109 in the International System of Units , therefore 1 gigabyte is...
hard disk drives.

After the war, the family was interned, the parents were brought to a camp. His father, a Russia-born engineer who since 1928 worked for Škoda, died on 27 November 1945 in Czech imprisonment and is buried in a mass grave in Pilsen which is also inscribed with Grünberg Theodor † 27. November 1945. His mother Anna (who died in 2002 aged 100) had to work in agriculture and stayed with her parents in the Petermann house in Untersekerschan (Dolní Sekyřany), where her children (a sister was born in 1937) were brought to later. The remaining Grünberg family, like almost all Germans, was expelled from Czechoslovakia
Expulsion of Germans from Czechoslovakia
The expulsion of Germans from Czechoslovakia after World War II was part of a series of evacuations and expulsions of Germans from Central and Eastern Europe during and after World War II....
in 1946. Seven year old Peter came to Lauterbach, Hesse
Lauterbach, Hesse
Lauterbach is a town in the Vogelsbergkreis district of the federal state of Hesse in central Germany.-History:Lauterbach was founded between 400 and 800 AD. In 812 the town was mentioned for the first time in a document of the church in Schlitz. In the Middle Ages, Lauterbach belonged to the...
where he attended gymnasium.

Grünberg received his intermediate diploma in 1962 from the Johann Wolfgang Goethe University in Frankfurt. He then attended the Darmstadt University of Technology
Darmstadt University of Technology
The Technische Universität Darmstadt, abbreviated TU Darmstadt, is a university in the city of Darmstadt, Germany...
, where he received his diploma in physics in 1966 and his Ph.D. in 1969. From 1969 to 1972, he did postdoctoral work at Carleton University
Carleton University
Carleton University is a comprehensive university located in the capital of Canada, Ottawa, Ontario. The enabling legislation is The Carleton University Act, 1952, S.O. 1952. Founded as a small college in 1942, Carleton now offers over 65 programs in a diverse range of disciplines. Carleton has...
in Ottawa
Ottawa
Ottawa is the capital of Canada, the second largest city in the Province of Ontario, and the fourth largest city in the country. The city is located on the south bank of the Ottawa River in the eastern portion of Southern Ontario...
, Canada. He later joined the Institute for Solid State Physics at Forschungszentrum Jülich, where he became a leading researcher in the field of thin film and multilayer magnetism until his retirement in 2004.

In 1986 he discovered the antiparallel exchange coupling between ferromagnetic layers separated by a thin non-ferromagnetic layer, and in 1988 he discovered the Giant magnetoresistive effect
Giant magnetoresistive effect
Giant magnetoresistance is a quantum mechanical magnetoresistance effect observed in thin-film structures composed of alternating ferromagnetic and non-magnetic layers...
(GMR). GMR was simultaneously and independently discovered by Albert Fert
Albert Fert
Albert Fert is a French physicist and one of the discoverers of giant magnetoresistance which brought about a breakthrough in gigabyte hard disks...
from the Université de Paris Sud. It has been used extensively in read heads of modern hard drives. Another application of the GMR effect is non-volatile, magnetic random access memory
MRAM
Magnetoresistive Random-Access Memory is a non-volatile computer memory technology that has been under development since the 1990s. Continued increases in density of existing memory technologies – notably flash RAM and DRAM – kept it in a niche role in the market, but its proponents...
.

Apart from the Nobel Prize, Grünberg's work also has been rewarded with shared prizes in the APS International Prize for New Materials, the International Union of Pure and Applied Physics Magnetism Award, the Hewlett-Packard Europhysics Prize, the Wolf Prize in Physics
Wolf Prize in Physics
The Wolf Prize in Physics is awarded once a year by the Wolf Foundation in Israel. It is one of the six Wolf Prizes established by the Foundation and awarded since 1978; the others are in Agriculture, Chemistry, Mathematics, Medicine and Arts. The Prize is often considered the most prestigious...
and the 2007 Japan Prize
Japan Prize
is awarded to people from all parts of the world whose "original and outstanding achievements in science and technology are recognized as having advanced the frontiers of knowledge and served the cause of peace and prosperity for mankind."- Explanation :...
. He won the German Future Prize
German Future Prize
The German Future Prize award is considered one of the most prestigious conferred for science and innovation within Germany. The award is worth 250,000 euros and is more than a scientific prize, it helps to identify projects which not only are of high scientific value, but which have concrete...
for Technology and Innovation in 1998 and was named European Inventor of the Year in the category "Universities and research institutions" by the European Patent Office and European Commission in 2006.