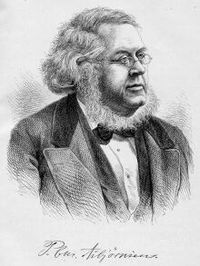 Peter Christen Asbjørnsen was born in Christiania (now Oslo
Oslo
Oslo is a municipality, as well as the capital and most populous city in Norway. As a municipality , it was established on 1 January 1838. Founded around 1048 by King Harald III of Norway, the city was largely destroyed by fire in 1624. The city was moved under the reign of Denmark–Norway's King...
) and was descended from a family originating in Otta
Otta, Norway
is a town in the municipality of Sel in the county of Oppland in Norway. It has about 2,750 inhabitants. The Otta river joins the Gudbrandsdalslågen river at Otta. Next to Otta lies the massive Rondane, which became the first national park in Norway in 1962, and which has several mountains over...
in Gudbrandsdal
Gudbrandsdal
The Gudbrandsdalen is a valley and traditional district in the Norwegian county of Oppland. The valley is oriented in a north-westerly direction from Lillehammer at Mjøsa, extending 230 km toward Romsdal...
, which is believed to have become extinct with his death. He became a student at the University of Oslo
University of Oslo
The University of Oslo , formerly The Royal Frederick University , is the oldest and largest university in Norway, situated in the Norwegian capital of Oslo. The university was founded in 1811 and was modelled after the recently established University of Berlin...
in 1833, but as early as 1832, in his twentieth year, he had begun to collect and write down fairy tales and legend
Legend
A legend is a narrative of human actions that are perceived both by teller and listeners to take place within human history and to possess certain qualities that give the tale verisimilitude...
s. He later walked on foot the length and breadth of Norway, adding to his stories.

Jørgen Moe, who was born in Ringerike
Ringerike
oskar er kjempe kulRingerike is a municipality in Buskerud county, Norway. It is part of the traditional region of Ringerike...
, met Asbjørnsen first when he was fourteen years old, while they were both attending high school at Norderhov
Norderhov
Norderhov is a former municipality in Buskerud county, Norway.-Municipality:Norderhov municipality was established on January 1, 1838 . According to the 1835 census the municipality had a population of 7,234. On 22 April 1852 the city of Hønefoss was separated from Norderhov to constitute a...
rectory. The building is today the site of the local museum for the Ringerike region, and contains memorabilia from both Asbjørnsen and Moe. They developed a life-long friendship. In 1834 Asbjørnsen discovered that Moe had started independently on a search for the relics of national folklore; the friends eagerly compared their results, and determined for the future to work in concert.

Asbjørnsen became by profession a zoologist, and with the aid of the University of Oslo
University of Oslo
The University of Oslo , formerly The Royal Frederick University , is the oldest and largest university in Norway, situated in the Norwegian capital of Oslo. The university was founded in 1811 and was modelled after the recently established University of Berlin...
made a series of investigative voyages along the coasts of Norway, particularly in the Hardangerfjord
Hardangerfjord
With a length of , the Hardangerfjord in the county of Hordaland in Norway is the third largest fjord in the world and the second largest in Norway. The surrounding district is called Hardanger....
. He worked with two of the most famous marine biologists of their time: Michael Sars
Michael Sars
Michael Sars was a Norwegian theologian and biologist.-Biography:Sars was born in Bergen, Norway. He studied natural history and theology at Royal Frederick University from 1823 and completed a cand.theol. degree in 1828. For several years he taught at a number of different schools, firstly in...
and his son Georg Ossian Sars. Moe, meanwhile, having left the University of Oslo in 1839, had devoted himself to the study of theology
Theology
Theology is the systematic and rational study of religion and its influences and of the nature of religious truths, or the learned profession acquired by completing specialized training in religious studies, usually at a university or school of divinity or seminary.-Definition:Augustine of Hippo...
, and was making a living as a tutor in Christiania. In his holidays he wandered through the mountains, in the most remote districts, collecting stories.

In 1842-1843 the first installment of their work appeared, under the title of (Norwegian Folk Tales), which was received at once all over Europe
Europe
Europe is, by convention, one of the world's seven continents. Comprising the westernmost peninsula of Eurasia, Europe is generally 'divided' from Asia to its east by the watershed divides of the Ural and Caucasus Mountains, the Ural River, the Caspian and Black Seas, and the waterways connecting...
as a most valuable contribution to comparative mythology
Mythology
The term mythology can refer either to the study of myths, or to a body or collection of myths. As examples, comparative mythology is the study of connections between myths from different cultures, whereas Greek mythology is the body of myths from ancient Greece...
as well as literature
Literature
Literature is the art of written works, and is not bound to published sources...
. A second volume was published in 1844 and a new collection in 1871. Many of the were translated into English
English language
English is a West Germanic language that arose in the Anglo-Saxon kingdoms of England and spread into what was to become south-east Scotland under the influence of the Anglian medieval kingdom of Northumbria...
by Sir George Dasent
George Webbe Dasent
Sir George Webbe Dasent was a translator of folk tales and contributor to The Times.Dasent was born 22 May 1817 at St. Vincent, West Indies, the son of the attorney general, John Roche Dasent...
in 1859.

In 1845 Asbjørnsen also published, without help from Moe, a collection of Norwegian fairy tale
Fairy tale
A fairy tale is a type of short story that typically features such folkloric characters, such as fairies, goblins, elves, trolls, dwarves, giants or gnomes, and usually magic or enchantments. However, only a small number of the stories refer to fairies...
s (). In 1856 Asbjørnsen called attention to the deforestation
Deforestation
Deforestation is the removal of a forest or stand of trees where the land is thereafter converted to a nonforest use. Examples of deforestation include conversion of forestland to farms, ranches, or urban use....
of Norway, and he induced the government to act on this issue. He was appointed forest-master, and was sent through Norway to examine in various countries of the north of Europe the methods observed for the preservation of timber
Timber
Timber may refer to:* Timber, a term common in the United Kingdom and Australia for wood materials * Timber, Oregon, an unincorporated community in the U.S...
. In 1876, he retired from these duties with a pension. In 1879 he sold his large collection of zoological specimens to the Natural History Museum (Ireland)
Natural History Museum (Ireland)
Ireland's Natural History Museum , often called the Dead Zoo a branch of the National Museum of Ireland, is housed on Merrion Street in Dublin, Ireland...
for £300. This collection includes specimens of Brisinga endecacnemos, possibly collected during his biological survey of the Hardangerfjord in the 1850s. He died in Christiania in 1885.

In the 20th century, Norwegian filmmaker Ivo Caprino
Ivo Caprino
Ivo Caprino was a Norwegian film director and writer, best known for his puppet films. His most famous film is Flåklypa Grand Prix , made in 1975.- Early career :...
made a series of puppet films based on the Asbjørnsen fairy tales, where Asbjørnsen featured in the introduction to each film. Caprino also built a theme park in near Lillehammer
Lillehammer
is a town and municipality in Oppland county, Norway, globally known for hosting the 1994 Winter Olympics. It is part of the traditional region of Gudbrandsdal. The administrative centre of the municipality is the town of Lillehammer. As of May 2011, the population of the town of Lillehammer was...
where these fairy tales play a central role.