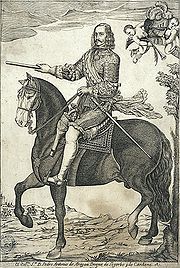 Pedro Antonio de Aragón (1611–1690) was a Spanish
Spain
Spain , officially the Kingdom of Spain languages]] under the European Charter for Regional or Minority Languages. In each of these, Spain's official name is as follows:;;;;;;), is a country and member state of the European Union located in southwestern Europe on the Iberian Peninsula...
nobleman, military figure and politician
Politician
A politician, political leader, or political figure is an individual who is involved in influencing public policy and decision making...
who served under Kings Philip IV
Philip IV of Spain
Philip IV was King of Spain between 1621 and 1665, sovereign of the Spanish Netherlands, and King of Portugal until 1640...
and Charles II of Spain
Charles II of Spain
Charles II was the last Habsburg King of Spain and the ruler of large parts of Italy, the Spanish territories in the Southern Low Countries, and Spain's overseas Empire, stretching from the Americas to the Spanish East Indies...
. He was the brother of Cardinal Pascual de Aragón
Pascual de Aragón
Pascual de Aragón y Córdoba was s Spanish nobleman and cleric. He served as Viceroy of Naples and as Archbishop of Toledo....
, Viceroy of Naples, 1664 - 1666. the son of Enrique Ramón Folch de Cardona y Córdoba.

He was born in Lucena, in what is now the Province of Córdoba. A cultured and educated man, he held different positions of high importance for the Court, acting as Viceroy of Catalonia from 1642 to 1644, as Ambassador in Rome (1664–1666), and Viceroy of Naples (1666–1671), as well as Commander in chief of Catalonia
Catalonia
Catalonia is an autonomous community in northeastern Spain, with the official status of a "nationality" of Spain. Catalonia comprises four provinces: Barcelona, Girona, Lleida, and Tarragona. Its capital and largest city is Barcelona. Catalonia covers an area of 32,114 km² and has an...
.

He succeeded in 1670 to the joint titles of 7th Duke of Segorbe, and 8th Duke of Cardona, because of the death of his nephew known usually as Luis Raimundo Folch de Cardona.

He was brought before the Justice Courts by two females from the family and their husbands, but he died in Madrid
Madrid
Madrid is the capital and largest city of Spain. The population of the city is roughly 3.3 million and the entire population of the Madrid metropolitan area is calculated to be 6.271 million. It is the third largest city in the European Union, after London and Berlin, and its metropolitan...
before the case was solved, creating some problems afterwards with the numbering of the titles of both Dukedoms since then as apparently he had been too quick claiming "legal" , self-appointed, succession to both Dukedoms.