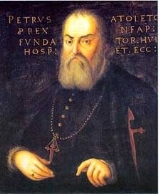 Encyclopedia
Don
Don (honorific)
Don, from Latin dominus, is an honorific in Spanish , Portuguese , and Italian . The female equivalent is Doña , Dona , and Donna , abbreviated "Dª" or simply "D."-Usage:...
Pedro Álvarez de Toledo y Zúñiga, jure uxoris
Jure uxoris
Jure uxoris is a Latin term that means "by right of his wife" or "in right of a wife". It is commonly used to refer to a title held by a man whose wife holds it in her own right. In other words, he acquired the title simply by being her husband....
Marquis of Villafranca del Bierzo (July 13, 1484 –Florence
Florence
Florence is the capital city of the Italian region of Tuscany and of the province of Florence. It is the most populous city in Tuscany, with approximately 370,000 inhabitants, expanding to over 1.5 million in the metropolitan area....
, Italy
Italy
Italy , officially the Italian Republic languages]] under the European Charter for Regional or Minority Languages. In each of these, Italy's official name is as follows:;;;;;;;;), is a unitary parliamentary republic in South-Central Europe. To the north it borders France, Switzerland, Austria and...
, February 21, 1553) was the first effective Spanish viceroy of Naples, 1532 - 1552, responsible for considerable social, economic and urban change in the city and southern Italian kingdom, in general.

He was born in 1484 near Salamanca
Salamanca
Salamanca is a city in western Spain, in the community of Castile and León. Because it is known for its beautiful buildings and urban environment, the Old City was declared a UNESCO World Heritage Site in 1988. It is the most important university city in Spain and is known for its contributions to...
in Spain
Spain
Spain , officially the Kingdom of Spain languages]] under the European Charter for Regional or Minority Languages. In each of these, Spain's official name is as follows:;;;;;;), is a country and member state of the European Union located in southwestern Europe on the Iberian Peninsula...
, the second son of Fadrique Álvarez de Toledo, 2nd Duke of Alba
Fadrique Álvarez de Toledo, 2nd Duke of Alba
Fadrique Álvarez de Toledo y Enríquez, 2nd Duke of Alba was a Spanish nobleman, military leader and politician....
. His mother Isabel de Zúñiga y Pimentel, was a daughter of Maria Enriquez, the sister of Juana Enríquez
Juana Enríquez
Juana Enriquez de Córdoba, 5th Lady of Casarrubios del Monte , was a Castilian noblewoman who became Queen of the Kingdoms of the Crown of Aragon.-Biography:...
, Queen Consort of Aragon through her marriage to widover king of Aragon Juan II of Aragon , and the mother of Ferdinand II of Aragon
Ferdinand II of Aragon
Ferdinand the Catholic was King of Aragon , Sicily , Naples , Valencia, Sardinia, and Navarre, Count of Barcelona, jure uxoris King of Castile and then regent of that country also from 1508 to his death, in the name of...
and ancestress of Habsburgs. Through this relation, Charles V, Holy Roman Emperor
Charles V, Holy Roman Emperor
Charles V was ruler of the Holy Roman Empire from 1519 and, as Charles I, of the Spanish Empire from 1516 until his voluntary retirement and abdication in favor of his younger brother Ferdinand I and his son Philip II in 1556.As...
and King of Spain was a second cousin of Don Pedro.

Spain took over the Kingdom of Naples
Kingdom of Naples
The Kingdom of Naples, comprising the southern part of the Italian peninsula, was the remainder of the old Kingdom of Sicily after secession of the island of Sicily as a result of the Sicilian Vespers rebellion of 1282. Known to contemporaries as the Kingdom of Sicily, it is dubbed Kingdom of...
in 1503 and solidified her grasp after the final, failed attempt by France
France
The French Republic , The French Republic , The French Republic , (commonly known as France , is a unitary semi-presidential republic in Western Europe with several overseas territories and islands located on other continents and in the Indian, Pacific, and Atlantic oceans. Metropolitan France...
in 1529 to retake the kingdom. For the first three decades of the century, a succession of inconsequential viceroys ruled the vicerealm. Don Pedro arrived as viceroy in September of 1532.

Don Pedro’s rebuilding of the city went on for years. Old city walls were expanded and an entirely new wall was built along the sea front. Fortresses along those walls and further up and down the coast from the city were modernized, and the Arsenale—the naval shipyards—were expanded considerably. Don Pedro also built the viceregal palace as well as a dozen blocks of barracks nearby, a square grid of streets lined with multi-storied buildings—unique in Europe for its time. Today, that section of Naples is still called the “Spanish Quarter”. The goal was to make not just the city of Naples, but the Gulf of Naples
Gulf of Naples
The Gulf of Naples is a c. 15 km wide gulf located in the south western coast of Italy, . It opens to the west into the Mediterranean Sea. It is bordered on the north by the cities of Naples and Pozzuoli, on the east by Mount Vesuvius, and on the south by the Sorrentine Peninsula and the main...
and eventually, the entire vice-realm invulnerable—that is, the entire southern Italian peninsula.

Don Pedro ruled harshly. He instituted summary execution for petty theft on public streets and made it a capital crime to go armed at night in the city. He was ruthless in dealing with feudal barons in the countryside and encouraged their moving into the city within reach of a central authority. This breaking-up of land holdings began a trend to urbanization as both the landed class and the landless peasant class poured into Naples. By 1550, the population of 200,000 was second only to Paris
Paris
Paris is the capital and largest city in France, situated on the river Seine, in northern France, at the heart of the Île-de-France region...
in all of Europe. Within the city, he centralized administration, moving all courts onto the same premises, the Castel Capuano
Castel Capuano
Castel Capuano is a castle in Naples, southern Italy. It takes its name from the fact that it was at that point in the city walls where the road led out to the city of Capua...
, also known as the "Vicaria".

Don Pedro is remembered as the viceroy who tried without success to institute the Spanish Inquisition
Spanish Inquisition
The Tribunal of the Holy Office of the Inquisition , commonly known as the Spanish Inquisition , was a tribunal established in 1480 by Catholic Monarchs Ferdinand II of Aragon and Isabella I of Castile. It was intended to maintain Catholic orthodoxy in their kingdoms, and to replace the Medieval...
in Naples, in 1547. When the announcement of the Inquisition finally came in May of 1547, the protest was immediate, turning violent very quickly. It was not a "popular" revolution, but rather a revolt by many of the landed nobility
Landed nobility
Landed nobility is a category of nobility in various countries over the history, for which landownership was part of their noble privileges. Their character depends on the country.*Landed gentry is the landed nobility in the United Kingdom and Ireland....
in and around Naples
Naples
Naples is a city in Southern Italy, situated on the country's west coast by the Gulf of Naples. Lying between two notable volcanic regions, Mount Vesuvius and the Phlegraean Fields, it is the capital of the region of Campania and of the province of Naples...
and Salerno
Salerno
Salerno is a city and comune in Campania and is the capital of the province of the same name. It is located on the Gulf of Salerno on the Tyrrhenian Sea....
, property owners who knew that the Inquisition had a reputation for confiscating the wealth and property of those whom it questioned.

Don Pedro, upon the order of the emperor, Charles V
Charles V, Holy Roman Emperor
Charles V was ruler of the Holy Roman Empire from 1519 and, as Charles I, of the Spanish Empire from 1516 until his voluntary retirement and abdication in favor of his younger brother Ferdinand I and his son Philip II in 1556.As...
backed down and the Inquisition was called off. In 1552, Charles V calmed the populace further by sending Toledo off to Siena
Siena
Siena is a city in Tuscany, Italy. It is the capital of the province of Siena.The historic centre of Siena has been declared by UNESCO a World Heritage Site. It is one of the nation's most visited tourist attractions, with over 163,000 international arrivals in 2008...
to handle a local problem. The viceroy died in Florence
Florence
Florence is the capital city of the Italian region of Tuscany and of the province of Florence. It is the most populous city in Tuscany, with approximately 370,000 inhabitants, expanding to over 1.5 million in the metropolitan area....
, where one of his daughters, Eleanor of Toledo was duchess consort of Medici
Medici
The House of Medici or Famiglia de' Medici was a political dynasty, banking family and later royal house that first began to gather prominence under Cosimo de' Medici in the Republic of Florence during the late 14th century. The family originated in the Mugello region of the Tuscan countryside,...
the following year.

Don Pedro's reputation as a city-builder has stood the test of time. The city of Naples still bears his stamp in countless places. He was supposed to be entombed in the church of San Giacomo degli Spagnoli in Naples, but his sudden death in Florence left his sepulchre empty. He was buried in the Cathedral of Florence then.

Don Pedro Álvarez de Toledo married his relative Maria Osorio, 2nd Marquise of Villafranca del Bierzo, deceased 1539 and passing to be the 3rd Marquis his son Fadrique who had no issue, deceased 1569. They had seven children:


Through the marriage of his youngest daughter, Eleanor of Toledo with the Grand Duke Cosimo I de' Medici in 1539, Don Pedro Álvarez de Toledo became an ancestor of Bourbon
House of Bourbon
The House of Bourbon is a European royal house, a branch of the Capetian dynasty . Bourbon kings first ruled Navarre and France in the 16th century. By the 18th century, members of the Bourbon dynasty also held thrones in Spain, Naples, Sicily, and Parma...
Kings of France and Spain, Habsburg
Habsburg
The House of Habsburg , also found as Hapsburg, and also known as House of Austria is one of the most important royal houses of Europe and is best known for being an origin of all of the formally elected Holy Roman Emperors between 1438 and 1740, as well as rulers of the Austrian Empire and...
-Lorraine Emperors of the Holy Roman Empire
Holy Roman Empire
The Holy Roman Empire was a realm that existed from 962 to 1806 in Central Europe.It was ruled by the Holy Roman Emperor. Its character changed during the Middle Ages and the Early Modern period, when the power of the emperor gradually weakened in favour of the princes...
, Austria and Austria-Hungary and Grand Dukes of Tuscany, several Stuart
House of Stuart
The House of Stuart is a European royal house. Founded by Robert II of Scotland, the Stewarts first became monarchs of the Kingdom of Scotland during the late 14th century, and subsequently held the position of the Kings of Great Britain and Ireland...
Kings and Queens of England and Scotland, Kings of Italy from the House of Savoy
House of Savoy
The House of Savoy was formed in the early 11th century in the historical Savoy region. Through gradual expansion, it grew from ruling a small county in that region to eventually rule the Kingdom of Italy from 1861 until the end of World War II, king of Croatia and King of Armenia...
, and other noble families. He is also the direct ancestor of Diana, Princess of Wales
Diana, Princess of Wales
Diana, Princess of Wales was the first wife of Charles, Prince of Wales, whom she married on 29 July 1981, and an international charity and fundraising figure, as well as a preeminent celebrity of the late 20th century...
, as well as of her son, Prince William, Duke of Cambridge, the future King of Great Britain.