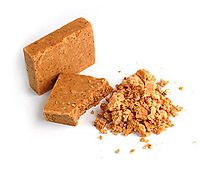 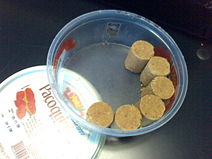 Paçoca is the name of two different Brazilian dishes
Cuisine of Brazil
Brazilian cuisine, like Brazil itself, varies greatly by region. The natural crops available in each region add to their singularity.Brazilian cooking, while it has many similarities with that of its South American neighbors, is distinct...
:

In northeastern Brazil
Northeast Region, Brazil
The Northeast Region of Brazil is composed of the following states: Maranhão, Piauí, Ceará, Rio Grande do Norte, Paraíba, Pernambuco, Alagoas, Sergipe and Bahia, and it represents 18.26% of the Brazilian territory....
, especially in Fortaleza
Fortaleza
Fortaleza is the state capital of Ceará, located in Northeastern Brazil. With a population close to 2.5 million , Fortaleza is the 5th largest city in Brazil. It has an area of and one of the highest demographic densities in the country...
, Ceará
Ceará
Ceará is one of the 27 states of Brazil, located in the northeastern part of the country, on the Atlantic coast. It is currently the 8th largest Brazilian State by population and the 17th by area. It is also one of the main touristic destinations in Brazil. The state capital is the city of...
, and in Rio Grande do Norte
Rio Grande do Norte
Rio Grande do Norte is one of the states of Brazil, located in the northeastern region of the country, occupying the northeasternmost tip of the South American continent. Because of its geographic position, Rio Grande do Norte has a strategic importance. The capital and largest city is Natal...
, it's a dish made of carne de sol (sun-dried beef), cassava
Cassava
Cassava , also called yuca or manioc, a woody shrub of the Euphorbiaceae native to South America, is extensively cultivated as an annual crop in tropical and subtropical regions for its edible starchy tuberous root, a major source of carbohydrates...
flour
Flour
Flour is a powder which is made by grinding cereal grains, other seeds or roots . It is the main ingredient of bread, which is a staple food for many cultures, making the availability of adequate supplies of flour a major economic and political issue at various times throughout history...
and red onion
Onion
The onion , also known as the bulb onion, common onion and garden onion, is the most widely cultivated species of the genus Allium. The genus Allium also contains a number of other species variously referred to as onions and cultivated for food, such as the Japanese bunching onion The onion...
s, ground together in a mortar
Mortar and pestle
A mortar and pestle is a tool used to crush, grind, and mix solid substances . The pestle is a heavy bat-shaped object, the end of which is used for crushing and grinding. The mortar is a bowl, typically made of hard wood, ceramic or stone...
(pilão), for which reason it's also known as paçoca de pilão in the rest of Brazil.

In other regions of Brazil, paçoca is a kind of candy
Candy
Candy, specifically sugar candy, is a confection made from a concentrated solution of sugar in water, to which flavorings and colorants are added...
made of ground peanut
Peanut
The peanut, or groundnut , is a species in the legume or "bean" family , so it is not a nut. The peanut was probably first cultivated in the valleys of Peru. It is an annual herbaceous plant growing tall...
s and sugar
Sugar
Sugar is a class of edible crystalline carbohydrates, mainly sucrose, lactose, and fructose, characterized by a sweet flavor.Sucrose in its refined form primarily comes from sugar cane and sugar beet...
. It began as a home-made candy, but today it is manufactured commercially and can be found in supermarket
Supermarket
A supermarket, a form of grocery store, is a self-service store offering a wide variety of food and household merchandise, organized into departments...
s and shops.

The name "paçoca" comes from the Tupi
Tupi
The Tupi people, Tupinambá, were one of the main ethnic groups of Brazilian indigenous people. Scholars believe they first settled in the Amazon rainforest, but 2,900 years ago they started to spread southward and gradually occupied the Atlantic coast....
word "posok" which means "to crumble" or "to shatter".
The source of this article is wikipedia, the free encyclopedia.  The text of this article is licensed under the GFDL.