Perona, was founded by the bishop of Ösel-Wiek
Bishopric of Ösel-Wiek
The Bishopric of Ösel–Wiek was a semi-independent Roman Catholic prince-bishopric in what is now Saare, Hiiu and Lääne counties of Estonia.The bishopric was created as a state of Holy Roman Empire on 1 October 1228, by Henry, King of the Romans...
ca. 1251, suffered heavily under pressure of the concurrent town, and was finally destroyed ca. 1600. Another town, Embeke (later ) was founded by the Livonian Order
Livonian Order
The Livonian Order was an autonomous Livonian branch of the Teutonic Order and a member of the Livonian Confederation from 1435–1561. After being defeated by Samogitians in the 1236 Battle of Schaulen , the remnants of the Livonian Brothers of the Sword were incorporated into the Teutonic Knights...
, who began building an Ordensburg
Ordensburg
An Ordensburg was a fortress built by crusading German military orders during the Middle Ages. "Ordensburg" was also used during Nazi Germany to refer to training schools for Nazi leaders.- Medieval Ordensburgen :...
nearby in 1265. The latter town, then known by the German name of Pernau, was a member of the Hanseatic League
Hanseatic League
The Hanseatic League was an economic alliance of trading cities and their merchant guilds that dominated trade along the coast of Northern Europe...
and an important ice-free harbor for Livonia
Livonia
Livonia is a historic region along the eastern shores of the Baltic Sea. It was once the land of the Finnic Livonians inhabiting the principal ancient Livonian County Metsepole with its center at Turaida...
. The Polish-Lithuanian Commonwealth
Polish-Lithuanian Commonwealth
The Polish–Lithuanian Commonwealth was a dualistic state of Poland and Lithuania ruled by a common monarch. It was the largest and one of the most populous countries of 16th- and 17th‑century Europe with some and a multi-ethnic population of 11 million at its peak in the early 17th century...
took control of town between 1560–1617; the Poles
Poland
Poland , officially the Republic of Poland , is a country in Central Europe bordered by Germany to the west; the Czech Republic and Slovakia to the south; Ukraine, Belarus and Lithuania to the east; and the Baltic Sea and Kaliningrad Oblast, a Russian exclave, to the north...
and Lithuanians
Lithuania
Lithuania , officially the Republic of Lithuania is a country in Northern Europe, the biggest of the three Baltic states. It is situated along the southeastern shore of the Baltic Sea, whereby to the west lie Sweden and Denmark...
fought the Swedes
Sweden
Sweden , officially the Kingdom of Sweden , is a Nordic country on the Scandinavian Peninsula in Northern Europe. Sweden borders with Norway and Finland and is connected to Denmark by a bridge-tunnel across the Öresund....
nearby in 1609. Sweden took control of the town during the 16th century Livonian War
Livonian War
The Livonian War was fought for control of Old Livonia in the territory of present-day Estonia and Latvia when the Tsardom of Russia faced a varying coalition of Denmark–Norway, the Kingdom of Sweden, the Union of the Grand Duchy of Lithuania and the Kingdom of Poland.During the period 1558–1578,...
, but it was subsequently taken by the Russian Empire
Russian Empire
The Russian Empire was a state that existed from 1721 until the Russian Revolution of 1917. It was the successor to the Tsardom of Russia and the predecessor of the Soviet Union...
in the 1710 Capitulation of Estonia and Livonia
Capitulation of Estonia and Livonia
With the Capitulation of Estonia and Livonia in 1710 the Swedish dominions Estonia and Livonia were integrated into the Russian Empire following their conquest during the Great Northern War...
and the 1721 Treaty of Nystad
Treaty of Nystad
The Treaty of Nystad was the last peace treaty of the Great Northern War. It was concluded between the Tsardom of Russia and Swedish Empire on 30 August / 10 September 1721 in the then Swedish town of Nystad , after Sweden had settled with the other parties in Stockholm and Frederiksborg.During...
, following the Great Northern War
Great Northern War
The Great Northern War was a conflict in which a coalition led by the Tsardom of Russia successfully contested the supremacy of the Swedish Empire in northern Central Europe and Eastern Europe. The initial leaders of the anti-Swedish alliance were Peter I the Great of Russia, Frederick IV of...
. It belonged to Imperial Russian Governorate of Livonia then. 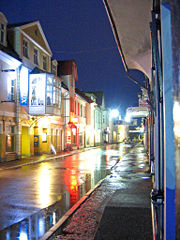 Pärnu is a health resort of international stature. In addition to guests arriving from around fifty countries, it is also proved by its membership in the European Spas Association (since 2000) and the European Flag
European flag
The flag of Europe consists of a circle of 12 golden stars on an azure background. It is the flag and emblem of the European Union and Council of Europe . It is also often used to indicate eurozone countries, and, more loosely, to represent the continent of Europe or the countries of Europe...
that has been flying at the beach of Pärnu since 2000. Many tourists in Pärnu are Finns and Estonians
Estonians
Estonians are a Finnic people closely related to the Finns and inhabiting, primarily, the country of Estonia. They speak a Finnic language known as Estonian...
. Hotel and restaurant staff speak English, Russian and some Finnish
Finnish language
Finnish is the language spoken by the majority of the population in Finland Primarily for use by restaurant menus and by ethnic Finns outside Finland. It is one of the two official languages of Finland and an official minority language in Sweden. In Sweden, both standard Finnish and Meänkieli, a...
in addition to Estonian
Estonian language
Estonian is the official language of Estonia, spoken by about 1.1 million people in Estonia and tens of thousands in various émigré communities...
.

In 1837, a few business-minded entrepreneurs decided to rebuild a lone tavern near the beach into a bathing establishment, thus preparing the ground for the development of the resort of Pärnu. This wooden building was the predecessor of the present-day mud bath
Mud bath
A mud bath is a bath of mud, commonly from areas where hot spring water can combine with volcanic ash. Mud baths have existed for thousands of years, and can be found now in high-end spas in many countries of the world....
s. The establishment, which was opened in 1838, accommodated 5-6 bathrooms that provided hot seawater baths in summer and operated as a sauna in winter. The wooden building was burnt down in the course of World War I
World War I
World War I , which was predominantly called the World War or the Great War from its occurrence until 1939, and the First World War or World War I thereafter, was a major war centred in Europe that began on 28 July 1914 and lasted until 11 November 1918...
. In 1927, the present stone building of Pärnu Mud Baths was erected at the same site. Later, the wings were attached to the building to accommodate a bath unit and a pool.

Today, disorders of the joints, spinal column and peripheral nervous system
Peripheral nervous system
The peripheral nervous system consists of the nerves and ganglia outside of the brain and spinal cord. The main function of the PNS is to connect the central nervous system to the limbs and organs. Unlike the CNS, the PNS is not protected by the bone of spine and skull, or by the blood–brain...
, gynaecological problems and dysfunction of the central nervous system are treated at Pärnu Mud Baths. The therapies include hydrotherapy
Hydrotherapy
Hydrotherapy, formerly called hydropathy, involves the use of water for pain-relief and treating illness. The term hydrotherapy itself is synonymous with the term water cure as it was originally marketed by practitioners and promoters in the 19th century...
, mud and ozocerite therapies, massage
Massage
Massage is the manipulation of superficial and deeper layers of muscle and connective tissue to enhance function, aid in the healing process, and promote relaxation and well-being. The word comes from the French massage "friction of kneading", or from Arabic massa meaning "to touch, feel or handle"...
, laser and electrotherapies, lymph and inhalation therapies, aromatherapy
Aromatherapy
Aromatherapy is a form of alternative medicine that uses volatile plant materials, known as essential oils, and other aromatic compounds for the purpose of altering a person's mind, mood, cognitive function or health....
and ECG. There are 130 rooms in the hotel of the Mud Baths. Today, Pärnu is the most popular health tourism destination in Estonia.

Since 1996 Pärnu has been known as Estonia's Summer Capital.