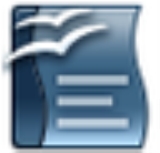 Encyclopedia
OpenOffice.org Writer is the word processor
Word processor
A word processor is a computer application used for the production of any sort of printable material....
component of the OpenOffice.org
OpenOffice.org
OpenOffice.org, commonly known as OOo or OpenOffice, is an open-source application suite whose main components are for word processing, spreadsheets, presentations, graphics, and databases. OpenOffice is available for a number of different computer operating systems, is distributed as free software...
software package
Software package (installation)
In package management systems, which are commonly used with Linux-based operating systems, a package is a specific piece of software which the system can install and uninstall....
. Writer is a word processor similar to Microsoft Word
Microsoft Word
Microsoft Word is a word processor designed by Microsoft. It was first released in 1983 under the name Multi-Tool Word for Xenix systems. Subsequent versions were later written for several other platforms including IBM PCs running DOS , the Apple Macintosh , the AT&T Unix PC , Atari ST , SCO UNIX,...
and Corel's WordPerfect
WordPerfect
WordPerfect is a word processing application, now owned by Corel.Bruce Bastian, a Brigham Young University graduate student, and BYU computer science professor Dr. Alan Ashton joined forces to design a word processing system for the city of Orem's Data General Corp. minicomputer system in 1979...
, with some of their features.

As with the entire OpenOffice.org suite, Writer can be used across a variety of platforms, including Microsoft Windows
Microsoft Windows
Microsoft Windows is a series of operating systems produced by Microsoft.Microsoft introduced an operating environment named Windows on November 20, 1985 as an add-on to MS-DOS in response to the growing interest in graphical user interfaces . Microsoft Windows came to dominate the world's personal...
, Linux
Linux
Linux is a Unix-like computer operating system assembled under the model of free and open source software development and distribution. The defining component of any Linux system is the Linux kernel, an operating system kernel first released October 5, 1991 by Linus Torvalds...
, FreeBSD
FreeBSD
FreeBSD is a free Unix-like operating system descended from AT&T UNIX via BSD UNIX. Although for legal reasons FreeBSD cannot be called “UNIX”, as the direct descendant of BSD UNIX , FreeBSD’s internals and system APIs are UNIX-compliant...
, Irix
IRIX
IRIX is a computer operating system developed by Silicon Graphics, Inc. to run natively on their 32- and 64-bit MIPS architecture workstations and servers. It was based on UNIX System V with BSD extensions. IRIX was the first operating system to include the XFS file system.The last major version...
and Solaris
Solaris Operating System
Solaris is a Unix operating system originally developed by Sun Microsystems. It superseded their earlier SunOS in 1993. Oracle Solaris, as it is now known, has been owned by Oracle Corporation since Oracle's acquisition of Sun in January 2010....
. Released under the terms of the GNU Lesser General Public Licence, Writer is free software
Free software
Free software, software libre or libre software is software that can be used, studied, and modified without restriction, and which can be copied and redistributed in modified or unmodified form either without restriction, or with restrictions that only ensure that further recipients can also do...
.

Writer is capable of opening and saving documents in a number of formats, including the OASIS Open Document Format 1.1
OpenDocument
The Open Document Format for Office Applications is an XML-based file format for representing electronic documents such as spreadsheets, charts, presentations and word processing documents....
(its default format), Microsoft Word
Microsoft Word
Microsoft Word is a word processor designed by Microsoft. It was first released in 1983 under the name Multi-Tool Word for Xenix systems. Subsequent versions were later written for several other platforms including IBM PCs running DOS , the Apple Macintosh , the AT&T Unix PC , Atari ST , SCO UNIX,...
's DOC, DOCX, RTF
Rich Text Format
The Rich Text Format is a proprietary document file format with published specification developed by Microsoft Corporation since 1987 for Microsoft products and for cross-platform document interchange....
and XHTML
XHTML
XHTML is a family of XML markup languages that mirror or extend versions of the widely-used Hypertext Markup Language , the language in which web pages are written....
.

Writer provides a number of features not present in Word out of the box, including a word completion
Word completion
Word completion is a common feature in web browsers and similar text entry contexts. When a user begins the entry of a frequently-used word, the computer automatically completes it, or proposes a list of choices....
mechanism for predictive writing that is not available in Microsoft Word as of September, 2009.. It has ability to export to the PDF format natively similar to that in Microsoft Office 2010 and Microsoft Word 2007 .