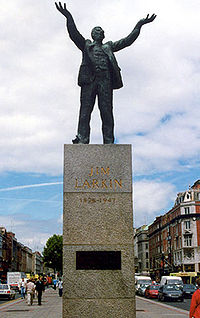 Oisín Kelly was an Irish sculptor
Sculpture
Sculpture is three-dimensional artwork created by shaping or combining hard materials—typically stone such as marble—or metal, glass, or wood. Softer materials can also be used, such as clay, textiles, plastics, polymers and softer metals...
.

Kelly was born as Austin Kelly in Dublin, the son of William Kelly, principal of James's Street National School, and his wife Elizabeth (née McLean) . Until he became an artist in residence at the Kilkenny Design Centre in 1966, he worked as a school teacher. He initially attended night class at the National College of Art and Design and studied briefly in 1948–1949 under Henry Moore
Henry Moore
Henry Spencer Moore OM CH FBA was an English sculptor and artist. He was best known for his semi-abstract monumental bronze sculptures which are located around the world as public works of art....
.

He originally concentrated on small wood carvings and his early commissions were mostly for Catholic churches. He became well known after he was commissioned to do a sculpture, The Children of Lir (1964), for Dublin's Garden of Remembrance
Garden of Remembrance (Dublin)
The Garden of Remembrance is a memorial garden in Dublin dedicated to the memory of "all those who gave their lives in the cause of Irish Freedom"...
, opened in 1966 on the 50th anniversary of the Easter Rising
Easter Rising
The Easter Rising was an insurrection staged in Ireland during Easter Week, 1916. The Rising was mounted by Irish republicans with the aims of ending British rule in Ireland and establishing the Irish Republic at a time when the British Empire was heavily engaged in the First World War...
. More public commissions followed, including the statue of James Larkin
James Larkin
James Larkin was an Irish trade union leader and socialist activist, born to Irish parents in Liverpool, England. He and his family later moved to a small cottage in Burren, southern County Down. Growing up in poverty, he received little formal education and began working in a variety of jobs...
on Dublin's O'Connell Street
O'Connell Street
O'Connell Street is Dublin's main thoroughfare. It measures 49 m in width at its southern end, 46 m at the north, and is 500 m in length...
.

"'These things are not secrets but mysteries,' / Oisin Kelly told me years ago / In Belfast, hankering after stone / That connived with the chisel, as if the grain / Remembered what the mallet tapped to know."