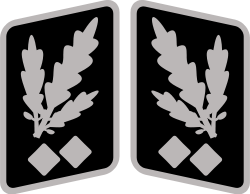 Obergruppenführer was a Nazi Party paramilitary rank that was first created in 1932 as a rank of the SA
Ranks and insignia of the Sturmabteilung
The uniforms and insignia of the Sturmabteilung were Nazi party paramilitary ranks and uniforms used by SA stormtroopers from 1921 until the fall of Nazi Germany in 1945. The titles and phrases used by the SA were the basis for paramilitary titles used by several other Nazi paramilitary groups,...
and until 1942 it was the highest SS rank inferior only to Reichsführer-SS
Reichsführer-SS
was a special SS rank that existed between the years of 1925 and 1945. Reichsführer-SS was a title from 1925 to 1933 and, after 1934, the highest rank of the German Schutzstaffel .-Definition:...
(Heinrich Himmler
Heinrich Himmler
Heinrich Luitpold Himmler was Reichsführer of the SS, a military commander, and a leading member of the Nazi Party. As Chief of the German Police and the Minister of the Interior from 1943, Himmler oversaw all internal and external police and security forces, including the Gestapo...
). Translated as "Senior Group Leader", the rank of SA-Obergruppenführer was held by members of the Oberste SA-Führung (Supreme SA Command) and also by veteran commanders of certain SA-Gruppen (SA Groups). The rank of Obergruppenführer was considered senior to the older title of Gruppenführer
Gruppenführer
Gruppenführer was an early paramilitary rank of the Nazi Party, first created in 1925 as a senior rank of the SA.-SS rank:...
.

As an SS rank, Obergruppenführer was created due to the growth and expansion of the SS
Schutzstaffel
The Schutzstaffel |Sig runes]]) was a major paramilitary organization under Adolf Hitler and the Nazi Party. Built upon the Nazi ideology, the SS under Heinrich Himmler's command was responsible for many of the crimes against humanity during World War II...
under Heinrich Himmler. Himmler was one of the first SS officers appointed to the rank of SS-Obergruppenführer, and held the rank while simultaneously serving as the Reichsführer-SS. At the time Himmler held the rank of Obergruppenführer, Reichsführer was simply a title and not yet an actual rank.

In the early days of the SS, the rank of Obergruppenführer was occasionally used to make two SS leaders equal in seniority, so as to prevent a power struggle within the Nazi Party. Such was the case with Kurt Daluege
Kurt Daluege
Kurt Daluege was a German Nazi SS-Oberstgruppenführer and Generaloberst der Polizei as chief of the Ordnungspolizei and ruled the Protectorate Bohemia and Moravia as Deputy Protector after Reinhard Heydrich's assassination.-Early life and career:Kurt Daluege, a son of a Prussian state official,...
, who commanded most of the SS in the Berlin
Berlin
Berlin is the capital city of Germany and is one of the 16 states of Germany. With a population of 3.45 million people, Berlin is Germany's largest city. It is the second most populous city proper and the seventh most populous urban area in the European Union...
region between 1930 and 1934. To avoid having the SS split into two separate entities, one based in Northern Germany and the other in Bavaria
Bavaria
Bavaria, formally the Free State of Bavaria is a state of Germany, located in the southeast of Germany. With an area of , it is the largest state by area, forming almost 20% of the total land area of Germany...
, Adolf Hitler
Adolf Hitler
Adolf Hitler was an Austrian-born German politician and the leader of the National Socialist German Workers Party , commonly referred to as the Nazi Party). He was Chancellor of Germany from 1933 to 1945, and head of state from 1934 to 1945...
promoted Daluege to the new rank of Obergruppenführer making him equal in rank to Himmler.

After the Night of the Long Knives
Night of the Long Knives
The Night of the Long Knives , sometimes called "Operation Hummingbird " or in Germany the "Röhm-Putsch," was a purge that took place in Nazi Germany between June 30 and July 2, 1934, when the Nazi regime carried out a series of political murders...
, the SS and the SA became two completely separate organizations. The SA continued to use the rank of Obergruppenführer, but the title gained predominance mainly in the SS. With the Nazi Party in power, and the SS a state agency of Germany, SS-Obergruppenführer was considered the highest rank of the Allgemeine SS
Allgemeine SS
The Allgemeine SS was the most numerous branch of the Schutzstaffel paramilitary forces of Nazi Germany. It was managed by the SS-Hauptamt...
(equivalent to lieutenant general) with the exception of Himmler’s special rank of Reichsführer-SS. Within the Waffen-SS
Waffen-SS
The Waffen-SS was a multi-ethnic and multi-national military force of the Third Reich. It constituted the armed wing of the Schutzstaffel or SS, an organ of the Nazi Party. The Waffen-SS saw action throughout World War II and grew from three regiments to over 38 divisions, and served alongside...
, the rank came to be considered the equivalent of a (German General) Lieutenant general
Lieutenant General
Lieutenant General is a military rank used in many countries. The rank traces its origins to the Middle Ages where the title of Lieutenant General was held by the second in command on the battlefield, who was normally subordinate to a Captain General....
; holders were titled in full SS-Obergruppenführer und General der Waffen-SS.

Ninety-eight men were to hold SS-Obergruppenführer rank, 21 of whom served in the Waffen-SS. The rank would remain the highest SS general officer rank until April 1942, when the rank of SS-Oberst-Gruppenführer was created.

The rank of Obergruppenführer was held by some of the most notorious figures in the SS, with Reinhard Heydrich
Reinhard Heydrich
Reinhard Tristan Eugen Heydrich , also known as The Hangman, was a high-ranking German Nazi official.He was SS-Obergruppenführer and General der Polizei, chief of the Reich Main Security Office and Stellvertretender Reichsprotektor of Bohemia and Moravia...
and Ernst Kaltenbrunner
Ernst Kaltenbrunner
Ernst Kaltenbrunner was an Austrian-born senior official of Nazi Germany during World War II. Between January 1943 and May 1945, he held the offices of Chief of the Reichssicherheitshauptamt , President of Interpol and, as a Obergruppenführer und General der Polizei und Waffen-SS, he was the...
both bearing the rank. Karl Wolff
Karl Wolff
Karl Friedrich Otto Wolff was a high-ranking member of the Nazi Schutzstaffel , ultimately holding the rank of SS-Obergruppenführer and General of the Waffen-SS. He became Chief of Personal Staff to the Reichsführer and SS Liaison Officer to Hitler until his replacement in 1943...
was another holder of the rank who was captured alive by the Allies after the close of Second World War. SS-Obergruppenführer was also the standard rank for SS and Police Leader
SS and Police Leader
SS and Police Leader was a title for senior Nazi officials that commanded large units of the SS, of Gestapo and of the regular German police during and prior to World War II.Three levels of subordination were established for bearers of this title:...
s as well as Corps commanders of the Waffen-SS
Waffen-SS
The Waffen-SS was a multi-ethnic and multi-national military force of the Third Reich. It constituted the armed wing of the Schutzstaffel or SS, an organ of the Nazi Party. The Waffen-SS saw action throughout World War II and grew from three regiments to over 38 divisions, and served alongside...
.
The source of this article is wikipedia, the free encyclopedia.  The text of this article is licensed under the GFDL.