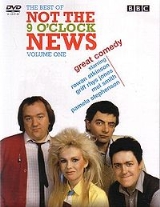 Overview
Not the Nine O'Clock News is a television comedy sketch show which was broadcast on BBC 2 from 1979 to 1982.

I watched "Not the 9 o'clock News" at the Playhouse Theatre in Edinburgh and I am sure that after the Intermission Tony Robinson walked down the centr...
More
x