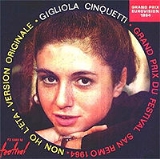 Encyclopedia
"Non ho l'età" was the winning song in the Eurovision Song Contest 1964
Eurovision Song Contest 1964
The Eurovision Song Contest 1964 was the ninth Eurovision Song Contest. It was held in Copenhagen, the capital of Denmark after the Danish victory the previous year. Sweden did not participate because of a boycott by singers. They did however broadcast it...
, held in Copenhagen
Copenhagen
Copenhagen is the capital and largest city of Denmark, with an urban population of 1,199,224 and a metropolitan population of 1,930,260 . With the completion of the transnational Øresund Bridge in 2000, Copenhagen has become the centre of the increasingly integrating Øresund Region...
. It was performed in Italian
Italian language
Italian is a Romance language spoken mainly in Europe: Italy, Switzerland, San Marino, Vatican City, by minorities in Malta, Monaco, Croatia, Slovenia, France, Libya, Eritrea, and Somalia, and by immigrant communities in the Americas and Australia...
by Gigliola Cinquetti
Gigliola Cinquetti
Gigliola Cinquetti is an Italian singer, TV presenter and journalist.-Biography:At the age of 16 she won the Sanremo Music Festival in 1964 singing "Non ho l'età" , with music composed by Nicola Salerno and lyrics by Mario Panzeri...
representing Italy
Italy
Italy , officially the Italian Republic languages]] under the European Charter for Regional or Minority Languages. In each of these, Italy's official name is as follows:;;;;;;;;), is a unitary parliamentary republic in South-Central Europe. To the north it borders France, Switzerland, Austria and...
. Like all previous Italian Eurovision entries, the song had also won that year's San Remo Music Festival. Cinquetti was sixteen years old at the time, making her the second youngest Eurovision winner in history after Belgium
Belgium
Belgium , officially the Kingdom of Belgium, is a federal state in Western Europe. It is a founding member of the European Union and hosts the EU's headquarters, and those of several other major international organisations such as NATO.Belgium is also a member of, or affiliated to, many...
's Sandra Kim
Sandra Kim
Sandra Caldarone , better known as Sandra Kim, is a Belgian singer of Italian descent who won the Eurovision Song Contest 1986 held in Bergen, Norway, on 3 May 1986....
who claimed she was fifteen when she won the contest with "J'aime la vie
J'Aime La Vie
"J'aime la vie" was the winner of the Eurovision Song Contest 1986, performed for Belgium by Sandra Kim. Belgium had finished the 1985 Contest in last place, and thus achieved the rare turnaround from last to first in the space of one year...
" in Bergen
Bergen
Bergen is the second largest city in Norway with a population of as of , . Bergen is the administrative centre of Hordaland county. Greater Bergen or Bergen Metropolitan Area as defined by Statistics Norway, has a population of as of , ....
in 1986 - although it was later revealed that Kim, in fact, was only thirteen.

"Non ho l'età" became a considerable commercial success for Cinquetti, both in Italy, the rest of Continental Europe, Scandinavia and throughout the world; she also recorded the song in English ("This is My Prayer"), Spanish ("No Tengo Edad"), French ("Je suis à toi"), German ("Luna nel blu") and Japanese ("Yumemiru Omoi") and the song has since also been covered by a wide range of artists in other languages.

Cinquetti returned to Eurovision in 1974, when she finished second with "Sì
Sì (song)
"Sì" is the name of the Italian entry to the Eurovision Song Contest 1974, which finished second behind the Swedish entry "Waterloo" sung by ABBA.-Background:...
" after ABBA
ABBA
ABBA was a Swedish pop group formed in Stockholm in 1970 which consisted of Anni-Frid Lyngstad, Björn Ulvaeus, Benny Andersson and Agnetha Fältskog...
's "Waterloo" and in 1991 she co-hosted the contest with Toto Cutugno
Toto Cutugno
Salvatore "Toto" Cutugno is an Italian pop singer-songwriter and musician.-Biography:Toto Cutugno was born in Fosdinovo, Tuscany, to a Sicilian father and a Tuscan mother. Shortly after his birth the family moved to La Spezia ....
when it was held in Rome
Rome
Rome is the capital of Italy and the country's largest and most populated city and comune, with over 2.7 million residents in . The city is located in the central-western portion of the Italian Peninsula, on the Tiber River within the Lazio region of Italy.Rome's history spans two and a half...
.
The source of this article is wikipedia, the free encyclopedia.  The text of this article is licensed under the GFDL.