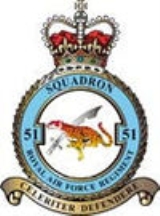 The history of No. 51 Squadron goes back to 1947 when it was formed at RAF Celle
RAF Celle
The former Royal Air Force Station Celle , more commonly known as RAF Celle , was a Royal Air Force station, a military airbase, in Germany, situated in the south-western suburbs of Celle, Lower Saxony...
near the Luneberg Heath in Germany
Germany
Germany , officially the Federal Republic of Germany , is a federal parliamentary republic in Europe. The country consists of 16 states while the capital and largest city is Berlin. Germany covers an area of 357,021 km2 and has a largely temperate seasonal climate...
by the redesignation of No. 2713 Squadron RAF Regiment. Its initial role was as a rifle squadron, protecting RAF facilities from ground attack. In 1955 it changed to the light anti-aircraft role which it retained until disbanded in 1957.

In 1964 the squadron reformed, switching back to the rifle role, at the RAF Regiment Depot. The first assignments of the unit after reforming were overseas to Cyprus
Cyprus
Cyprus , officially the Republic of Cyprus , is a Eurasian island country, member of the European Union, in the Eastern Mediterranean, east of Greece, south of Turkey, west of Syria and north of Egypt. It is the third largest island in the Mediterranean Sea.The earliest known human activity on the...
and Aden
Aden
Aden is a seaport city in Yemen, located by the eastern approach to the Red Sea , some 170 kilometres east of Bab-el-Mandeb. Its population is approximately 800,000. Aden's ancient, natural harbour lies in the crater of an extinct volcano which now forms a peninsula, joined to the mainland by a...
where it undertook internal security roles. After Rhodesia
Rhodesia
Rhodesia , officially the Republic of Rhodesia from 1970, was an unrecognised state located in southern Africa that existed between 1965 and 1979 following its Unilateral Declaration of Independence from the United Kingdom on 11 November 1965...
unilaterally declared independence in 1965 it was sent to Africa
Africa
Africa is the world's second largest and second most populous continent, after Asia. At about 30.2 million km² including adjacent islands, it covers 6% of the Earth's total surface area and 20.4% of the total land area...
to protect Gloster Javelin
Gloster Javelin
The Gloster Javelin was an "all-weather" interceptor aircraft that served with Britain's Royal Air Force in the late 1950s and most of the 1960s...
aircraft which were deployed in Zambia
Zambia
Zambia , officially the Republic of Zambia, is a landlocked country in Southern Africa. The neighbouring countries are the Democratic Republic of the Congo to the north, Tanzania to the north-east, Malawi to the east, Mozambique, Zimbabwe, Botswana and Namibia to the south, and Angola to the west....
. After returning to Catterick
RAF Catterick
RAF Catterick is a former Royal Air Force airfield located near Catterick, North Yorkshire in England.-History:Catterick airfield first opened in 1914 as a Royal Flying Corps aerodrome with the role of training pilots and to assist in the defence of the North East of England...
the unit's next deployment was back to Aden in the immediate period before the British withdrawal
Aden Emergency
The Aden Emergency was an insurgency against the British crown forces in the British controlled territories of South Arabia which now form part of the Yemen. Partly inspired by Nasser's pan Arab nationalism, it began on 10 December 1963 with the throwing of a grenade at a gathering of British...
from there in 1967. Its service in Aden was mainly spent at the many isolated airfields dotting that colony.

In 1968 the squadron shifted bases with a move to RAF Wittering
RAF Wittering
RAF Wittering is a Royal Air Force station within the unitary authority area of Peterborough, Cambridgeshire. Although Stamford in Lincolnshire is the nearest town, the runways of RAF Wittering cross the boundary between Cambridgeshire and Northamptonshire....
. This move was undertaken to support the Hawker Siddeley Harrier force which was then becoming operational. With the start of the troubles in Northern Ireland
Northern Ireland
Northern Ireland is one of the four countries of the United Kingdom. Situated in the north-east of the island of Ireland, it shares a border with the Republic of Ireland to the south and west...
in 1969, No. 51 Squadron deployed to the province, a process which it would repeat at regular intervals for the next 18 years. This period also saw deployments to RAF Salalah and Hong Kong
Hong Kong
Hong Kong is one of two Special Administrative Regions of the People's Republic of China , the other being Macau. A city-state situated on China's south coast and enclosed by the Pearl River Delta and South China Sea, it is renowned for its expansive skyline and deep natural harbour...
.

In 1982 the squadron moved back to Catterick from Wittering to re-role. It emerged operating the Combat Vehicle Reconnaissance (tracked)
Combat Vehicle Reconnaissance (Tracked)
The Combat Vehicle Reconnaissance  —or CVR—is a family of armoured fighting vehicles s in service with the British Army and others throughout the world...
family and in wartime it would have moved to Germany
Germany
Germany , officially the Federal Republic of Germany , is a federal parliamentary republic in Europe. The country consists of 16 states while the capital and largest city is Berlin. Germany covers an area of 357,021 km2 and has a largely temperate seasonal climate...
to defend airfields there. However its next war service was not to be in Europe but in the Middle East
Middle East
The Middle East is a region that encompasses Western Asia and Northern Africa. It is often used as a synonym for Near East, in opposition to Far East...
. In aftermath of the Iraqi invasion of Kuwait
Kuwait
The State of Kuwait is a sovereign Arab state situated in the north-east of the Arabian Peninsula in Western Asia. It is bordered by Saudi Arabia to the south at Khafji, and Iraq to the north at Basra. It lies on the north-western shore of the Persian Gulf. The name Kuwait is derived from the...
the squadron deployed to Arabia and detachments saw service at Dharan
Dharan, Nepal
Dharan is a major city in eastern Nepal, in the Sunsari District, situated on foothills of Mahabharat Range with southern tip touching the edge of the Terai at an altitude of 1148 ft . It serves as a trading post between the hilly region and the plains of Terai region. It was once the...
, Muharraq
Muharraq
Muharraq , is Bahrain's third largest city, and served as its capital until 1923. The city is located on Muharraq Island and has long been a centre of religiosity...
and Tabuk during the war. Following the Options for Change
Options for Change
Options for Change was a restructuring of the British Armed Forces in 1990, aimed at cutting defence spending following the end of the Cold War....
defence cuts the squadron was disbanded in 1993.

The dawn of a new century saw a return to active service for the squadron. Once again operating in a field squadron role, it reformed at RAF Honington
RAF Honington
RAF Honington is a Royal Air Force station located south of Thetford near Ixworth in Suffolk, England. Although used as a bomber station during the Second World War, RAF Honington is now the RAF Regiment depot and home to the Joint CBRN Regiment.-RAF use:...
in 2001 before moving to RAF Lossiemouth
RAF Lossiemouth
RAF Lossiemouth is a Royal Air Force station to the west of the town of Lossiemouth in Moray, Scotland. It is one of the RAF's biggest bases and is currently Britain's main base for Tornado GR4s. From 2013 the Northern QRA force of Typhoon F2 will relocate to Lossiemouth following the closure of...
. It was not long before war beckoned again and the squadron was deployed in the 2003 invasion of Iraq
2003 invasion of Iraq
The 2003 invasion of Iraq , was the start of the conflict known as the Iraq War, or Operation Iraqi Freedom, in which a combined force of troops from the United States, the United Kingdom, Australia and Poland invaded Iraq and toppled the regime of Saddam Hussein in 21 days of major combat operations...
. Following the invasion it has taken part in roulements back to the region.