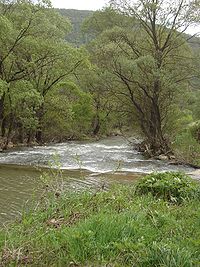 The Nišava or Nishava is a river in Bulgaria
Bulgaria
Bulgaria , officially the Republic of Bulgaria , is a parliamentary democracy within a unitary constitutional republic in Southeast Europe. The country borders Romania to the north, Serbia and Macedonia to the west, Greece and Turkey to the south, as well as the Black Sea to the east...
and Serbia
Serbia
Serbia , officially the Republic of Serbia , is a landlocked country located at the crossroads of Central and Southeast Europe, covering the southern part of the Carpathian basin and the central part of the Balkans...
, a right tributary, and with a length of 218 km also the longest one, of the Južna Morava
Južna Morava
South Morava or in the past Bulgarian Morava is a river in the Republic of Macedonia and Serbia which represents the shorter headwater of Great Morava...
.

The Nišava originates in western Bulgaria, in the Stara Planina mountains (east of Kom Peak
Kom Peak
Kom Peak or Golyam Kom is a peak in the western Balkan Mountains, located in western Bulgaria, not far from the Serbian border. The peak is 2,016 metres high and lies south of the town of Berkovitsa, of which it is a traditional symbol...
) near the village of Gintsi. Its source is close to the Serbian border. It enters Serbia after 67 km of flow through Bulgaria without receiving any major tributaries.

Because it flows through Gintsi, the upper course of the river is known as Ginska (Cyrillic: Гинска). It first flows to the south, then sharply turns west into the Godech
Godech
Godech is a small town located in the Sofia Province, of Bulgaria. The town is founded in a valley on the far west of Stara Planina, where the Nishava River passes. The settllment is about 20 km east of the Serbian border and has its highest peak Kom to the north. Godech is officially a...
Kettle, passing through Razboishte, after which it forms a gorge. Coming out of the gorge, it reaches Kalotina
Kalotina
Kalotina is a village in Dragoman municipality, Sofia Province, in westernmost central Bulgaria. As of 2010 it has 270 inhabitants and the mayor is Lidia Bozhilova. The village is located at the border with Serbia, 55 km to the northwest of the capital Sofia, on the main highway and railway...
, a major border crossing
Border Crossing
Border Crossing may refer to:* Border Crossing , an album by saxophonist Mike Osborne.* Border Crossing , a UK hip hop collective musical group.* Border Crossing , a 2001 novel by English author Pat Barker....
on the Bulgarian-Serbian border (Kalotina-Gradina), and continues to the west into Serbia.

The river belongs to the Black Sea
Black Sea
The Black Sea is bounded by Europe, Anatolia and the Caucasus and is ultimately connected to the Atlantic Ocean via the Mediterranean and the Aegean seas and various straits. The Bosphorus strait connects it to the Sea of Marmara, and the strait of the Dardanelles connects that sea to the Aegean...
drainage basin
Drainage basin
A drainage basin is an extent or an area of land where surface water from rain and melting snow or ice converges to a single point, usually the exit of the basin, where the waters join another waterbody, such as a river, lake, reservoir, estuary, wetland, sea, or ocean...
. Its own drainage area covers 3,950 km² (1,237 km² in Bulgaria and 2,713 km² in Serbia). The Nišava is not navigable. It is not only the longest tributary of the Južna Morava, but also the largest one in terms of discharge
Discharge (hydrology)
In hydrology, discharge is the volume rate of water flow, including any suspended solids , dissolved chemical species and/or biologic material , which is transported through a given cross-sectional area...
(36 km³/sec). It has many smaller tributaries, the most important being the Temštica
Temštica
The Temštica is a river in Serbia and Bulgaria, a right tributary of the Nišava River. The Temštica itself is not very long, but receives a much longer tributary, the Visočica , flowing from Bulgaria, making the Visočica-Temštica river system 86 km long.- Temštica :The Temštica or the Toplodoska...
from the right, and the Jerma
Jerma
The Jerma or Erma is a river in southeastern Serbia and western Bulgaria. Even though not very long , it is notable for passing the Serbian-Bulgarian border twice.- Serbia :...
(or Sukovska reka), Crvena reka, Koritnička reka and Kutinska reka from the left.

The Nišava valley is part of a major natural route that from ancient times has connected Europe
Europe
Europe is, by convention, one of the world's seven continents. Comprising the westernmost peninsula of Eurasia, Europe is generally 'divided' from Asia to its east by the watershed divides of the Ural and Caucasus Mountains, the Ural River, the Caspian and Black Seas, and the waterways connecting...
and Asia
Asia
Asia is the world's largest and most populous continent, located primarily in the eastern and northern hemispheres. It covers 8.7% of the Earth's total surface area and with approximately 3.879 billion people, it hosts 60% of the world's current human population...
: the route follows the valleys of the Morava
Velika Morava
The Great Morava is the final section of the Morava , a major river system in Serbia.- Length :...
, Nišava and Maritsa
Maritsa
The Maritsa or Evros , ) is, with a length of 480 km, the longest river that runs solely in the interior of the Balkans. It has its origin in the Rila Mountains in Western Bulgaria, flowing southeast between the Balkan and Rhodope Mountains, past Plovdiv and Parvomay to Edirne, Turkey...
and onwards towards Constantinople
Constantinople
Constantinople was the capital of the Roman, Eastern Roman, Byzantine, Latin, and Ottoman Empires. Throughout most of the Middle Ages, Constantinople was Europe's largest and wealthiest city.-Names:...
, present-day Istanbul
Istanbul
Istanbul , historically known as Byzantium and Constantinople , is the largest city of Turkey. Istanbul metropolitan province had 13.26 million people living in it as of December, 2010, which is 18% of Turkey's population and the 3rd largest metropolitan area in Europe after London and...
. Both the Belgrade
Belgrade
Belgrade is the capital and largest city of Serbia. It is located at the confluence of the Sava and Danube rivers, where the Pannonian Plain meets the Balkans. According to official results of Census 2011, the city has a population of 1,639,121. It is one of the 15 largest cities in Europe...
-Sofia
Sofia
Sofia is the capital and largest city of Bulgaria and the 12th largest city in the European Union with a population of 1.27 million people. It is located in western Bulgaria, at the foot of Mount Vitosha and approximately at the centre of the Balkan Peninsula.Prehistoric settlements were excavated...
-Istanbul road and the railway follow this route.

In its Serbian part, the Nišava carved a composite valley with several depressions (Dimitrovgrad, Pirot (or Basara; Cyrillic: Басара), Bela Palanka and Niš). However, the most prominent geological feature the river formed is the Sićevo gorge (Sićevačka klisura; Cyrillic: Сићевачка клисура) between Bela Palanka and Niška Banja. The river is quite powerful in the gorge, which is used for two power stations ('Sićevo' and 'Ostrovica') used for electricity production, irrigation and fishery. The gorge is 17 km long, 350–400 m deep, in some parts developing canyon like-structures (like inverse valley slopes at Gradiški kanjon; Cyrillic: Градишки кањон). The gorge itself carved through the Kunovica plateau between the southern slopes of the Mountains of Svrljig and the mountain of Suva Planina
Suva Planina
Suva Planina is the mountain range in Southern Serbia. It extends in a horseshoe-shaped curve from Niška Banja spa to Bela Palanka....
, and the surrounding areas are known for their high-quality vineyards. There is also a huge quarry in the gorge ('Ostrovica'), where six villages are located, the largest one being Sićevo that gives the name to the whole gorge.