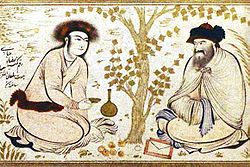 The meditation known in Arabic as Naẓar ila'l-murd , "contemplation of the beardless", and in Persian
Persian language
Persian is an Iranian language within the Indo-Iranian branch of the Indo-European languages. It is primarily spoken in Iran, Afghanistan, Tajikistan and countries which historically came under Persian influence...
Shahed-bāzī, , "witness play", is a Sufi practice of spiritual realization recorded since the earliest years of Islam
Islam
Islam . The most common are and .   : Arabic pronunciation varies regionally. The first vowel ranges from ~~. The second vowel ranges from ~~~...
. It is seen as an act of worship, held to realise the absolute beauty that is God through the relative beauty of the human form that is the divine image. In its best-known form it simply consists of gazing upon a beautiful boy.

Peter Lamborn Wilson (a.k.a. Hakim Bey) explains this as the use of "imaginal yoga
Yoga
Yoga is a physical, mental, and spiritual discipline, originating in ancient India. The goal of yoga, or of the person practicing yoga, is the attainment of a state of perfect spiritual insight and tranquility while meditating on Supersoul...
" to transmute erotic desire into spiritual consciousness. Its exponents quote the saying of the prophet Mohammed; "God is beautiful and loves beauty", as well as the Platonic love
Platonic love
Platonic love is a chaste and strong type of love that is non-sexual.-Amor Platonicus:The term amor platonicus was coined as early as the 15th century by the Florentine scholar Marsilio Ficino. Platonic love in this original sense of the term is examined in Plato's dialogue the Symposium, which has...
of the Symposium
Symposium
In ancient Greece, the symposium was a drinking party. Literary works that describe or take place at a symposium include two Socratic dialogues, Plato's Symposium and Xenophon's Symposium, as well as a number of Greek poems such as the elegies of Theognis of Megara...
.

Naẓar was a principal expression of a male love that, according to the teachings, was not to be consummated physically.

Zangi discussed the legitimacy of love for a male beloved saying, "And it is said that when God . . . wants to honor a worshiper with the robe of true love and put the real crown of love on his head, He will make him fall in earthly love so that he would learn the ways of being a lover . . . and passes from the raw stage of desiring attention to the ripeness of (spiritual) supplication."

Richard Francis Burton
Richard Francis Burton
Captain Sir Richard Francis Burton KCMG FRGS was a British geographer, explorer, translator, writer, soldier, orientalist, cartographer, ethnologist, spy, linguist, poet, fencer and diplomat. He was known for his travels and explorations within Asia, Africa and the Americas as well as his...
, claims that Easterners value the love of boys above the love of women, using Persian terminology in which the moth and the bulbul (nightingale) represent the lover, and the taper and the rose represent the boy and the girl, respectively. According to him, "Devotion of the moth to the taper is purer and more fervent than the Bulbul's love for the Rose."

Not all followed the teachings strictly to the letter. On being challenged by Rabiʿa al-ʿAdawiyya (c.717-801) of Basrah (Sufi woman saint who first set forth the doctrine of mystical love), upon noticing him kissing a boy, for appreciating the beauty of boys above that of God, the ascetic Sufi Rabah al-Qaysi retorted that, "On the contrary, this is a mercy that God Most High has put into the hearts of his slaves."

Conservative Islamic theologians condemned the custom of contemplating the beauty of boys. Their suspicions may have been justified, as some dervish
Dervish
A Dervish or Darvesh is someone treading a Sufi Muslim ascetic path or "Tariqah", known for their extreme poverty and austerity, similar to mendicant friars in Christianity or Hindu/Buddhist/Jain sadhus.-Etymology:The Persian word darvīsh is of ancient origin and descends from a Proto-Iranian...
es boasted of enjoying far more than "glances", or even kisses. Nazar was denounced as rank heresy
Heresy
Heresy is a controversial or novel change to a system of beliefs, especially a religion, that conflicts with established dogma. It is distinct from apostasy, which is the formal denunciation of one's religion, principles or cause, and blasphemy, which is irreverence toward religion...
by such as Ibn Taymiyya (1263–1328), who complained, "They kiss a slave boy and claim to have seen God!"

The real danger to conventional religion, as Peter Lamborn Wilson
Peter Lamborn Wilson
Peter Lamborn Wilson , is an American political writer, essayist, and poet, known for first proposing the concept of the Temporary Autonomous Zone , based, in part, on a historical review of pirate utopias...
asserts, was not so much the mixing of sodomy with worship, but "the claim that human beings can realize themselves in love more perfectly than in religious practices." Despite opposition from the clerics, the practice has survived in Islamic countries until only recent years, according to Murray and Roscoe in their work on Islamic homosexualities.

In an illuminated manuscript of Sufi poet Abdul-Rahman Jami
Jami
Nur ad-Dīn Abd ar-Rahmān Jāmī also known as DJāmī, Mawlanā Nūr al-Dīn 'Abd al-Rahmān or Abd-Al-Rahmān Nur-Al-Din Muhammad Dashti who is commonly known as Jami , is known for his achievements as a scholar, mystic, writer, composer of numerous lyrics and idylls, historian, and one of the greatest...
's (1414–1492) Haft Awrang, an anthology of seven allegorical poems on wisdom and love, there is a calligraphed verse in the section titled A Father Advises his Son About Love in which a father instructs his son, when choosing a worthy male lover [friend?], to choose that man who sees beyond the mere physical and expresses a love for his inner qualities. Alternatively, the verse could be about choosing a friend, for the word used in Jami's poem is "dosti" -friendship, rather than "aashiqi" or Love. In either case the love would be platonic. The verse exemplifies one Sufi way of turning love into wisdom:


I have written on the wall and door of every house


About the grief of my love for you.


And read the state of my condition.

In my heart I had his face before me.


With this face before me, I saw what I had in my heart.

A recurrent topic of Sufi homoerotic lore is the tale of Mahmud of Ghazni
Mahmud of Ghazni
Mahmud of Ghazni , actually ', was the most prominent ruler of the Ghaznavid dynasty who ruled from 997 until his death in 1030 in the eastern Iranian lands. Mahmud turned the former provincial city of Ghazni into the wealthy capital of an extensive empire which covered most of today's Iran,...
and his boy slave Ayaz
Malik Ayaz
Malik Ayaz, son of Aymáq Abu'n-Najm, was a Turkic slave who rose to the rank of officer and general in the army of Sultan Mahmud of Ghazni . His rise to power was a reward for the devotion he bore his master....
. Many poets have treated the subject, among whom Attar
Attar
Abū Hamīd bin Abū Bakr Ibrāhīm , better known by his pen-names Farīd ud-Dīn and ‘Attār , was a Persian Muslim poet, theoretician of Sufism, and hagiographer from Nīshāpūr who had an abiding influence on Persian poetry and Sufism.-Biography:Information about Attar's life is rare...
who included eight stories about them in his Elahi-nama alone. One of them shows how love elevates the beloved:


One day sultan Mahmud asks Ayaz, his famous beloved, whether he knows a king greater and more powerful than he. Ayaz answers, "Yes, I am a greater king than you." When the king asks for proof, he says, "Because even though you are king, your heart rules you, and this slave is the king of your heart."