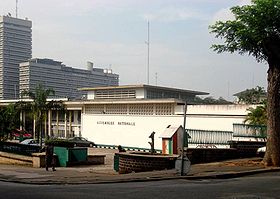 The National Assembly of Côte d'Ivoire is Côte d'Ivoire
Côte d'Ivoire
The Republic of Côte d'Ivoire or Ivory Coast is a country in West Africa. It has an area of , and borders the countries Liberia, Guinea, Mali, Burkina Faso and Ghana; its southern boundary is along the Gulf of Guinea. The country's population was 15,366,672 in 1998 and was estimated to be...
's unicameral legislative body. Evolved from semi-representative bodies of the French Colonial period
French West Africa
French West Africa was a federation of eight French colonial territories in Africa: Mauritania, Senegal, French Sudan , French Guinea , Côte d'Ivoire , Upper Volta , Dahomey and Niger...
, the first National Assembly was constituted on 27 November 1960 with 70 elected member (députés) in accordance with the Constitution of 31 October 1960, which created the First Republic.

Legislative power in Côte d’Ivoire is exercised by Deputies elected from Constituencies (Circonscriptions) by a Scrutin de Liste or Plurality-at-large voting
Plurality-at-large voting
Plurality-at-large voting is a non-proportional voting system for electing several representatives from a single multimember electoral district using a series of check boxes and tallying votes similar to a plurality election...
which has neither a proportional representation
Proportional representation
Proportional representation is a concept in voting systems used to elect an assembly or council. PR means that the number of seats won by a party or group of candidates is proportionate to the number of votes received. For example, under a PR voting system if 30% of voters support a particular...
or panachage
Panachage
Panachage is the name given to the procedure – sometimes provided for in elections conducted according to the party-list proportional representation system – which allows voters to distribute their votes between individual candidates from different party lists...
element common in many such systems. The powers of this Assembly expire at the end of its second regular session (session ordinaire) in the fifth year of its mandate. The Assembly is then reformed by election from candidates who must be Ivorian citizens of 25 years or older who have never renounced their Ivorian nationality.

The 1st National Assembly of the Second Republic of Côte d’Ivoire elected for the period 2000-2005 was marked by both internal political crisis and the Ivorian Civil War. No elections were held in 2005, but with the peace deal ending the Civil War, elections are expected on 30 November 2008. The current National Assembly is made up of 225 elected officials, with Mamadou Koulibaly
Mamadou Koulibaly
Mamadou Koulibaly is an Ivorian politician who has been President of the National Assembly of Côte d'Ivoire since January 2001. Previously he was Minister of the Budget in 2000 and Minister of the Economy and Finance from 2000 to 2001...
(FPI) as the current president.