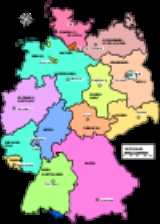 The NOFV-Oberliga Sud was formed in 1991 when, along with the political reunion
German reunification
German reunification was the process in 1990 in which the German Democratic Republic joined the Federal Republic of Germany , and when Berlin reunited into a single city, as provided by its then Grundgesetz constitution Article 23. The start of this process is commonly referred by Germans as die...
of Germany
Germany
Germany , officially the Federal Republic of Germany , is a federal parliamentary republic in Europe. The country consists of 16 states while the capital and largest city is Berlin. Germany covers an area of 357,021 km2 and has a largely temperate seasonal climate...
, the former East German football league system was integrated into the German one.

The league was formed from clubs from six different leagues: One club from the Oberliga Nordost, the former DDR-Oberliga
DDR-Oberliga
The DDR-Oberliga was, prior to German reunification in 1990, the elite level of football competition in the DDR , being roughly equivalent to the Oberliga or Bundesliga in West Germany.-Overview:Following World...
, fourteen clubs from the NOFV-Liga A and B, the former East German second division, and one each from the three Verbandsligas, the new state leagues. The league accommodated therefore a wide mix of clubs from the east and west of Germany. Unlike the two other NOFV-Oberligas, it contained no clubs from Berlin
Berlin
Berlin is the capital city of Germany and is one of the 16 states of Germany. With a population of 3.45 million people, Berlin is Germany's largest city. It is the second most populous city proper and the seventh most populous urban area in the European Union...
, due to geographical reasons, and therefore was the only one of the three to have no West German clubs in it.

For the duration of the league and onwards, the leagues below it are:


In 1994, the German football league system saw some major changes. The four Regionalligen were introduced as an intermediate level between 2nd Bundesliga and Oberligen, relegating the Oberligen to the fourth tier. In the east of Germany, the Regionalliga Nordost
Regionalliga Nordost
The Regionalliga Nordost was the third tier of the German football league system in the states of former East Germany and West-Berlin from 1994 to 2000. As such, it was almost identical in territorial cover to the old DDR-Oberliga....
was formed, a league covering the area of former East Germany and West-Berlin. Four clubs from the NOFV-Oberliga Süd were admitted to the new league:


The NOFV-Oberliga Mitte was disbanded and its clubs spread between the two remaining Oberligen in the east. Four clubs from the former league were added to the NOFV-Oberliga Süd.

From 1995 to 1999, the champions of the league were directly promoted to the Regionalliga Nordost.

With the reduction of the number of Regionalligen to two, the league came under the Regionalliga Nord
Regionalliga Nord
The Regionalliga Nord is currently the fourth tier of the German football league system. Until the introduction of the 3rd Liga in 2008 it was the third tier. It currently is the highest regional league for the northern and eastern part of Germany. It covers ten of the sixteen states of Germany...
. Six clubs were relegated that season from the now disbanded Regionalliga Nordost to the Oberliga. The regulations about promotion kept on changing and until 2006, the league champion had to play-off with the champion of the northern league for one promotion spot. Only in 2004 did the southern champion failed to win the play-off. From the 2006 season onwards, direct promotion was awarded again.

The league changes in 2008, with the introduction of the 3rd Liga, meant the Oberligen were now the fifth tier of league football in Germany. The top three teams of the league in 2007–08 gained entry to the Regionalliga, the fourth placed team had to play-off against the fourth placed team from the north for one more spot, these teams being:


Otherwise, the setup of the league did not change and its champion was directly promoted from the 2008-09 season onwards.

Another league reform, decided upon in 2010, will see the reestablishment of the Regionalliga Nordost from 2012 onwards, with the two NOFV-Oberligas feeding into this league again.


Founding members of the league

The founding members of the league in 1991 were:
From the Oberliga Nordost:
From the NOFV-Liga Staffel A:

From the Verbandsliga Sachsen:

From the Verbandsliga Sachsen-Anhalt:

From the Verbandsliga Thüringen:
From the NOFV-Liga Staffel B: