Mustamäe covers 8.1 km² and is located 5km from the center of Tallinn.
Mustamäe is bordered by the streets Tuuliku, Kadaka tee, Tildri, Siili, Nõmme tee, Retke tee, Ehitajate tee, Üliõpilaste tee, Raja, Soone, Lossi, Mäepealse, Kadaka puiestee, Järveotsa tee. Mustamäe is bordered by Nõmme hill (part of the Baltic Klint
Baltic Klint
The Baltic Klint is an erosional limestone escarpment on several islands of the Baltic Sea, in Estonia and in Leningrad Oblast of Russia...
) in the south and Tallinn Zoo
Tallinn Zoo
Tallinn Zoo is a zoo in Tallinn, Estonia that was founded in 1939. It is the only zoo in Estonia, and as of 2008 it housed 7158 animals representing 619 species.-History:...
in northwest.

Mustamäe is divided into 4 subdistricts :

Established in 1962 and completed in 1973 as a microdistrict
Microdistrict
Microdistrict, or microraion , is a residential complex—a primary structural element of the residential area construction in the Soviet Union and in some post-Soviet and former Communist states...
, Mustamäe was Tallinn's first large district.
Similar districts, Õismäe
Õismäe
Õismäe is a subdistrict in the district of Haabersti, Tallinn, the capital of Estonia. It has a population of 852 .-References:...
and Lasnamäe
Lasnamäe
Lasnamäe is the most populous administrative district of Tallinn, the capital of Estonia. The districts' population is about 115,000, the majority of which is Russian-speaking. Local housing is mostly represented by 5-16 stories high panel blocks of flats, built in the 1970-1990s. Lasnamäe is...
were completed later. 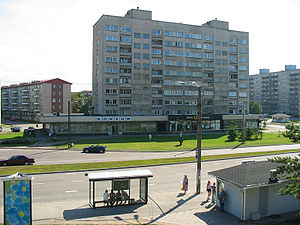 Mustamäe is connected to the rest of Tallinn via three main streets:
Mustamäe tee and Sõpruse puiestee lead to the centre of Tallinn, and Ehitajate tee crosses Mustamäe while connecting Nõmme and Õismäe. Other major streets include: A. H. Tammsaare tee, Kadaka tee, Ed. Vilde tee, and Akadeemia tee. Most of the public transportation operates on these streets. Mustamäe is serviced by buses and trolleybus
Trolleybus
A trolleybus is an electric bus that draws its electricity from overhead wires using spring-loaded trolley poles. Two wires and poles are required to complete the electrical circuit...
es. Out the 8 trolleybus lines
of Tallinn, 6 operate (partly) in Mustamäe.