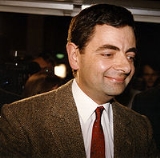 Overview
Mr. Bean is a British
United Kingdom
The United Kingdom of Great Britain and Northern IrelandIn the United Kingdom and Dependencies, other languages have been officially recognised as legitimate autochthonous languages under the European Charter for Regional or Minority Languages...
comedy television programme series of 14 half-hour episodes written by and starring Rowan Atkinson
Rowan Atkinson
Rowan Sebastian Atkinson is a British actor, comedian, and screenwriter. He is most famous for his work on the satirical sketch comedy show Not The Nine O'Clock News, and the sitcoms Blackadder, Mr. Bean and The Thin Blue Line...
as the title character. Different episodes were also written by Robin Driscoll
Robin Driscoll
Robin Driscoll is a British actor and writer, best known as a writer of Mr. Bean. He and Rowan Atkinson are close friends.He appeared with Rowan Atkinson in Laughing Matters - Visual Comedy, a documentary on the mechanics of visual humour....
, Richard Curtis
Richard Curtis
Richard Whalley Anthony Curtis, CBE is a New Zealand-born British screenwriter, music producer, actor and film director, known primarily for romantic comedy films such as Four Weddings and a Funeral, Bridget Jones's Diary, Notting Hill, Love Actually and The Girl in the Café, as well as the hit...
and one by Ben Elton
Ben Elton
Benjamin Charles "Ben" Elton is an English comedian, author, playwright and director. He was a leading figure in the British alternative comedy movement of the 1980s, as a writer on such cult series as The Young Ones and Blackadder, as well as also a successful stand-up comedian on stage and TV....
. The pilot episode was broadcast on ITV
ITV
ITV is the major commercial public service TV network in the United Kingdom. Launched in 1955 under the auspices of the Independent Television Authority to provide competition to the BBC, it is also the oldest commercial network in the UK...
on 1 January 1990, with the last television episode, "Goodnight Mr. Bean" broadcast on 31 October 1995. The final episode, "Hair by Mr. Bean of London", was a video exclusive released on 15 November 1995, but not broadcast in the UK until 2006.

Based on a character originally developed by Atkinson at university, the series follows the exploits of Mr.

What were the influences that caused the making of the character?

When did Mr. Bean make his debut?

What other shows were made based on the Mr. Bean character?

How did the Mr. Bean character come about?

How many episodes of Mr. Bean were made?
More
x