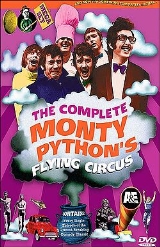 Overview
Monty Python’s Flying Circus (known during the final series as just Monty Python) is a BBC TV sketch comedy
Sketch comedy
A sketch comedy consists of a series of short comedy scenes or vignettes, called "sketches," commonly between one and ten minutes long. Such sketches are performed by a group of comic actors or comedians, either on stage or through an audio and/or visual medium such as broadcasting...
series. The shows were composed of surreality
Surreal humour
Surreal humour is a form of humour based on violations of causal reasoning with events and behaviours that are logically incongruent. Constructions of surreal humour involve bizarre juxtapositions, non-sequiturs, irrational situations, and/or expressions of nonsense.The humour arises from a...
, risqué or innuendo-laden humour, sight gags
Visual gag
In comedy, a visual gag or sight gag is anything which conveys its humor visually, often without words being used at all.There are numerous examples in cinema history of directors who based most of the humour in their films on visual gags, even to the point of using no or minimal dialogue...
and observational sketches without punchlines
Punch line
A punch line is the final part of a joke, comedy sketch, or profound statement, usually the word, sentence or exchange of sentences which is intended to be funny or to provoke laughter or thought from listeners...
. It also featured Terry Gilliam
Terry Gilliam
Terrence Vance "Terry" Gilliam is an American-born British screenwriter, film director, animator, actor and member of the Monty Python comedy troupe. Gilliam is also known for directing several films, including Brazil , The Adventures of Baron Munchausen , The Fisher King , and 12 Monkeys...
's animations, which are often sequenced or merged with live action.

The first episode was recorded on 7 September and broadcast on 5 October 1969 on BBC One, with 45 episodes airing over four series from 1969 to 1974, plus two episodes for German TV.

"IT'S..." A hermit right before the opening titles