Encyclopedia
Montbéliard is a city in the Doubs department in the Franche-Comté
Franche-Comté
Franche-Comté the former "Free County" of Burgundy, as distinct from the neighbouring Duchy, is an administrative region and a traditional province of eastern France...
region
Régions of France
France is divided into 27 administrative regions , 22 of which are in Metropolitan France, and five of which are overseas. Corsica is a territorial collectivity , but is considered a region in mainstream usage, and is even shown as such on the INSEE website...
in eastern France. It is one of the two subprefectures of the department.

Mentioned first in 985 as Mons Beliardae, it became a county
County of Montbéliard
The County of Montbéliard , also known as County of Mömpelgard , was a feudal county of the Holy Roman Empire based around the city of Montbéliard in the present-day Franche-Comté region of France...
of the Holy Roman Empire
Holy Roman Empire
The Holy Roman Empire was a realm that existed from 962 to 1806 in Central Europe.It was ruled by the Holy Roman Emperor. Its character changed during the Middle Ages and the Early Modern period, when the power of the emperor gradually weakened in favour of the princes...
in the 11th century. In 1397 the town, known in German as Mömpelgard, passed by marriage of Henriette, heiress of county to Eberhard IV, Count of Württemberg
Eberhard IV, Count of Württemberg
Eberhard IV of Württemberg , Count of Württemberg.-Life:He was elder son of Count Eberhard III and Antonia Visconti. On 13 November 1397 he became engaged to Henriette of Mömpelgard...
, to the House of Württemberg
House of Württemberg
The Württemberg family is a European royal family and a German dynasty from Württemberg. The House has its origins, according to recent research, probably in the vicinity of the Salian dynasty.-History:...
. In 1524, ten years earlier than in Württemberg
Württemberg
Württemberg , formerly known as Wirtemberg or Wurtemberg, is an area and a former state in southwestern Germany, including parts of the regions Swabia and Franconia....
, duke Ulrich
Ulrich, Duke of Württemberg
Herzog Ulrich von Württemberg succeeded his kinsman Eberhard II as Duke of Württemberg in 1498, being declared of age in 1503.-Early life:...
and reformer William Farel
William Farel
William Farel , né Guilhem Farel, 1489 in Gap, Dauphiné, in south-eastern France, was a French evangelist, and a founder of the Reformed Church in the cantons of Neuchâtel, Berne, Geneva, and Vaud in Switzerland...
made Mömpelgard Protestant
Protestantism
Protestantism is one of the three major groupings within Christianity. It is a movement that began in Germany in the early 16th century as a reaction against medieval Roman Catholic doctrines and practices, especially in regards to salvation, justification, and ecclesiology.The doctrines of the...
(specifically Lutheran
Lutheranism
Lutheranism is a major branch of Western Christianity that identifies with the theology of Martin Luther, a German reformer. Luther's efforts to reform the theology and practice of the church launched the Protestant Reformation...
). From 1598 to 1608, the architect Heinrich Schickhardt built several landmarks of the city, like St. Martin, a castle, a bridge, a college and several hotels.

As a consequence of the former rule under the dukes of Württemberg, it has been for centuries one of the few Protestant (specifically Lutheran) enclaves in France. The Württemberg coat of arms from 1495 represents Montbéliard as two jumping fishes on a red field.

The metropolitan area has a population of 302,000 (with the city of Belfort
Belfort
Belfort is a commune in the Territoire de Belfort department in Franche-Comté in northeastern France and is the prefecture of the department. It is located on the Savoureuse, on the strategically important natural route between the Rhine and the Rhône – the Belfort Gap or Burgundian Gate .-...
). 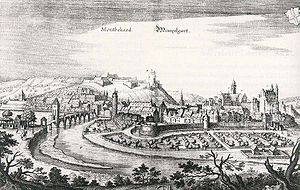 Montbéliard and the surrounding region constitute an important manufacturing center mainly based upon metallurgy and car industry.

The main manufacturing plant of the Peugeot
Peugeot
Peugeot is a major French car brand, part of PSA Peugeot Citroën, the second largest carmaker based in Europe.The family business that precedes the current Peugeot company was founded in 1810, and manufactured coffee mills and bicycles. On 20 November 1858, Emile Peugeot applied for the lion...
automobile company is partly located in Montbéliard and has around 20,000 employees. In the area the automotive industry accounts for 34,000 employees in more than 100 companies. The Peugeot company's museum
Musée de l'Aventure Peugeot
The Musée de l'Aventure Peugeot is a historical museum devoted to the Peugeot automobile business. The museum was founded by members of the Peugeot family, opening in 1988 across the road from the company’s huge industrial site at Sochaux in the Franche-Comté...
is located in the adjacent commune of Sochaux
Sochaux
Sochaux is a commune in the Doubs department in the Franche-Comté region in eastern France.-Population:Inhabitants are known as Sochaliens.-Economy:...
.

Montbéliard is the center of the 'Pays de Montbéliard', a metropolitan area of 132,000 inhabitants.


As the residence of the Counts of Montbéliard, the history of the castle is closely linked with the story of the families that reigned over the County for more than eight centuries. Built on a rocky promontory at the confluence of the Lizaine and Allan valleys, this stronghold, which already existed in the 10th century, was constantly transformed during the course of the centuries. Today, on the northern side of the edifice, one can admire the Henriette Tower (reconstructed by Countess Henriette in approximately 1424), the Frédéric Tower (1572 and 1595) and the main building dating back to the 18th century. The castle has become the Museum of the Castle of the Dukes of Württemberg, which includes a historical tour, an important archaeological department whose collections come mainly from excavations of local Gallo-Roman sites, the Cuvier natural history gallery and exhibits of paintings and sculptures of international renown. On the esplanade of the Castle, the Clock pavilion or Hôtel du Bailli (Bailli's quarters, also known as the gentlemen's quarters), built according to plans of the architect Schickhardt at the beginning of the 17th century, houses today the Academy of Music.

The Beurnier-Rossel mansion, located opposite St. Martin's church, near the Town Hall, stands as a witness to the life-style of the urban bourgeoisie during the 18h and 19th centuries. Today it houses the Museum of Art and History. The restored 18th century reception rooms on the first floor contain furniture, paintings, chandeliers and draperies which recreate the ambiance of a private residence. On the second floor, there is an exhibit of objects relating to the history of the town and local life (bibles, liturgical vessels, traditional headdresses etc.) and the collection of music boxes made by L'Épée is exhibited in the attic.

Saint Martin Protestant Church was built between 1601 and 1607 and is the work of Heinrich Schickhardt, the architect of Frederic 1st Prince of Montbéliard, in its purest form. It is also the oldest church in France dedicated to the Reformation form of worship.

Built between 1850 and 1875 on the Cardinal Mathieu's request to assert the Catholic reconquest over Lutheranism, Saint Maimboeuf Church dominates the town. Rich facade adornments and polychrome altarpiece. Worth seeing: its never-ending spire.

Montbeliard's most popular sports club is FCSM
FC Sochaux-Montbéliard
Football Club Sochaux-Montbéliard is a French association football club based in the city of Montbéliard. The club was founded in 1928 and currently plays in Ligue 1, the top tier of French football. Sochaux plays its home matches at the Stade Auguste Bonal located within the city...
(Football Club Sochaux-Montbéliard).
Founded in 1928, FC Sochaux-Montbéliard was a founder member of the French professional Football League. The club has played a record 62 seasons in Ligue 1
Ligue 1
Ligue 1 , is the French professional league for association football clubs. It is the country's primary football competition and serves as the top division of the French football league system. Ligue 1 is one of two divisions making up the Ligue de Football Professionnel, the other being Ligue 2....
, the most of any club in the French football league system. This consistancy contributed to the fact that FCSM, though a small club, has won all the possible national trophies.

Montbéliard is the birthplace of: