Encyclopedia
Messerschmitt-Bölkow-Blohm (MBB) was a German
Germany
Germany , officially the Federal Republic of Germany , is a federal parliamentary republic in Europe. The country consists of 16 states while the capital and largest city is Berlin. Germany covers an area of 357,021 km2 and has a largely temperate seasonal climate...
aerospace
Aerospace
Aerospace comprises the atmosphere of Earth and surrounding space. Typically the term is used to refer to the industry that researches, designs, manufactures, operates, and maintains vehicles moving through air and space...
company formed as the result of several mergers in the late 1960s. Among its best-known products was the MBB Bo 105 light twin helicopter. The company was bought by Daimler-Benz Aerospace AG in 1989, now part of EADS
EADS
The European Aeronautic Defence and Space Company N.V. is a global pan-European aerospace and defence corporation and a leading defence and military contractor worldwide...
. 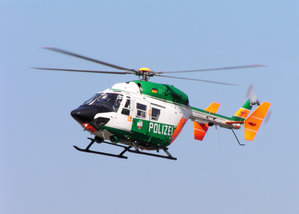 On 6 June 1968, Messerschmitt
Messerschmitt
Messerschmitt AG was a famous German aircraft manufacturing corporation named for its chief designer, Willy Messerschmitt, and known primarily for its World War II fighter aircraft, notably the Bf 109 and Me 262...
AG merged with the small civil engineering and civil aviation firm Bölkow
Bölkow
Bölkow was a German aircraft manufacturer based in Stuttgart, Germany, and later Ottobrunn.-History:The company was founded in 1948 by Ludwig Bölkow, who since 1955 with Emil Weiland had developed helicopters for Bölkow Entwicklungen KG....
, becoming Messerschmitt-Bölkow. The following May, the firm acquired Hamburger Flugzeugbau
Hamburger Flugzeugbau
Hamburger Flugzeugbau was an aircraft company, located in the Finkenwerder quarter of Hamburg, Germany. Originally established in July 1933 as a subsidiary of the Blohm & Voss shipyards, it has managed to survive under different names as part of different consortia from its German national...
(HFB), the aviation division of Blohm + Voss
Blohm + Voss
Blohm + Voss , is a German shipbuilding and engineering works. It is a subsidiary of ThyssenKrupp Marine Systems; there were plans to sell 80% of Blohm + Voss to Abu Dhabi Mar Group, but talks collapsed in July 2011.-History:It was founded on April 5, 1877, by Hermann Blohm and Ernst Voss as a...
. The company then changed its name to Messerschmitt-Bölkow-Blohm (MBB).

Originally 51% of MBB was owned by the Blohm family, Willy Messerschmitt
Willy Messerschmitt
Wilhelm Emil "Willy" Messerschmitt was a German aircraft designer and manufacturer. He was born in Frankfurt am Main, the son of a wine merchant...
and Ludwig Bölkow
Ludwig Bölkow
Ludwig Bölkow was one of the aeronautical pioneers of Germany.-Background:Born in Schwerin, in north-eastern Germany, in 1912, Bölkow was the son of a foreman employed by Fokker, one of the leading aircraft constructors of that time.-Early career:Bölkow’s first job was with Heinkel, the aircraft...
. 22.07% was owned by the German State of Hamburg
Hamburg
-History:The first historic name for the city was, according to Claudius Ptolemy's reports, Treva.But the city takes its modern name, Hamburg, from the first permanent building on the site, a castle whose construction was ordered by the Emperor Charlemagne in AD 808...
, 17.05% by the state of Bavaria
Bavaria
Bavaria, formally the Free State of Bavaria is a state of Germany, located in the southeast of Germany. With an area of , it is the largest state by area, forming almost 20% of the total land area of Germany...
, 7.16% by Thyssen AG
ThyssenKrupp
ThyssenKrupp AG is a German multinational conglomerate corporation headquartered in Duisburg Essen, Germany. The corporation consists of 670 companies worldwide. While ThyssenKrupp is one of the world's largest steel producers, the company also provides components and systems for the automotive...
, 7.16% by Siemens AG
Siemens AG
Siemens AG is a German multinational conglomerate company headquartered in Munich, Germany. It is the largest Europe-based electronics and electrical engineering company....
, 7.13% by Allianz Versicherungs-AG
Allianz
SE is a global financial services company headquartered in Munich, Germany. Its core business and focus is insurance. As of 2010, it was the world's 12th-largest financial services group and 23rd-largest company according to a composite measure by Forbes magazine.Its Allianz Global Investors...
, 7.13% by Robert Bosch GmbH
Robert Bosch GmbH
Robert Bosch GmbH is a multinational engineering and electronics company headquartered in Gerlingen, near Stuttgart, Germany. It is the world's largest supplier of automotive components...
and 6.15% by Friedrich Krupp GmbH
Krupp
The Krupp family , a prominent 400-year-old German dynasty from Essen, have become famous for their steel production and for their manufacture of ammunition and armaments. The family business, known as Friedrich Krupp AG Hoesch-Krupp, was the largest company in Europe at the beginning of the 20th...
.

In 1981, MBB acquired the Vereinigte Flugtechnische Werke (VFW)
Vereinigte Flugtechnische Werke
Vereinigte Flugtechnische Werke was a German aerospace company formed by the 1964 merger of Focke-Wulf and Weser Flugzeugbau GmbH...
, which itself had been formed by merging Focke-Wulf
Focke-Wulf
Focke-Wulf Flugzeugbau AG was a German manufacturer of civil and military aircraft before and during World War II. Many of the company's successful fighter aircraft designs were slight modifications of the Focke-Wulf Fw 190.-History:...
, Focke-Achgelis
Focke-Achgelis
Focke-Achgelis & Co. G.m.b.H. was a German helicopter company founded in 1937 by Henrich Focke and Gerd Achgelis.-History:In 1936 Focke had been ousted from the Focke-Wulf company he had cofounded in 1924 by shareholder pressure...
and Weserflug
Weser Flugzeugbau
Weser Flugzeugbau GmbH, known as Weserflug, was the fourth largest aircraft manufacturer in World War II Germany.The company was founded in 1934 as a subsidiary of the ship and machine company Deutsche Schiff- und Maschinenbau AG . It began production that year at Berlin Tempelhof, and in Bremen.In...
. In the following year, MBB acquired the astronautics company Entwicklungsring Nord (ERNO)
Entwicklungsring Nord
The Entwicklungsring Nord - abbreviated ERNO - was a 1961 joint venture of Bremen-based Weserflug and Focke-Wulf with Hamburger Flugzeugbau to develop parts for rockets and get involved in space activities....
and became MBB-ERNO.

In 1989 MBB was taken over by "Deutsche Aerospace AG" (DASA), which was renamed "Daimler-Benz Aerospace" in 1995. With the 1998 merger of Daimler Benz and Chrysler Corporation
Chrysler
Chrysler Group LLC is a multinational automaker headquartered in Auburn Hills, Michigan, USA. Chrysler was first organized as the Chrysler Corporation in 1925....
, the aerospace division was renamed DaimlerChrysler Aerospace AG on 7 November 1998. European defense consolidation led to DASA's being merged with Aerospatiale-Matra
Aérospatiale-Matra
Aérospatiale-Matra was a French missile and aircraft manufacturer. It was formed in 1999 by the merger of French companies Aérospatiale and Matra Haute Technologie....
of France and Construcciones Aeronáuticas SA
Construcciones Aeronáuticas SA
Construcciones Aeronáuticas SA , was a Spanish aircraft manufacturer. It became EADS CASA the Spanish branch of EADS in 1999, but was absorbed by Airbus Military in 2009...
(CASA) of Spain to form the European Aeronautic Defence and Space Company (EADS)
EADS
The European Aeronautic Defence and Space Company N.V. is a global pan-European aerospace and defence corporation and a leading defence and military contractor worldwide...
in 2000. The former DaimlerChrysler Aerospace now operates as "EADS Germany". 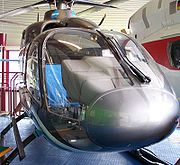 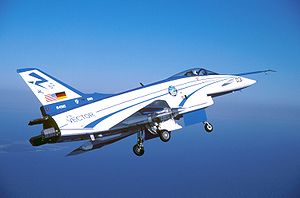