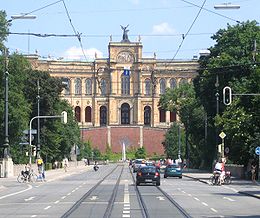 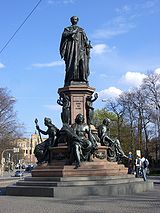 The neo-Renaissance Maximilianstraße in Munich
Munich
Munich The city's motto is "" . Before 2006, it was "Weltstadt mit Herz" . Its native name, , is derived from the Old High German Munichen, meaning "by the monks' place". The city's name derives from the monks of the Benedictine order who founded the city; hence the monk depicted on the city's coat...
is one of the city's four royal avenues. It starts at Max-Joseph-Platz
Max-Joseph-Platz
Max-Joseph-Platz is a large square in central Munich which was named after King Maximilian Joseph. Max-Joseph-Platz serves as the western starting point of the royal avenue Maximilianstraße.-Architecture:...
, where the Residenz
Residenz, Munich
The Munich Residenz is the former royal palace of the Bavarian monarchs in the center of the city of Munich, Germany...
and the National Theatre
National Theatre (Munich)
The National Theatre Munich is an opera house in Max-Joseph-Platz, in Munich, Germany. It is the home of the Bavarian State Opera, and the Bavarian State Ballet ....
are situated, and runs from west to east.

With this project, the king also aimed to "invent" a new architectural style which would combine the best features of historical models combined with then modern building technology. The avenue is framed by mostly neo-Gothic buildings influenced by the English Perpendicular style
English Gothic architecture
English Gothic is the name of the architectural style that flourished in England from about 1180 until about 1520.-Introduction:As with the Gothic architecture of other parts of Europe, English Gothic is defined by its pointed arches, vaulted roofs, buttresses, large windows, and spires...
.

Opposite to the National Theatre the north facade of the Old Mint Yard
Alte Münze
The Alte Münze is a renaissance building in Munich which originally served for the ducal stables and the art collections of Albert V, Duke of Bavaria....
got its neogothic decoration when the Maximilianstrasse was built to fit it with the concept of this royal avenue. The new buildings house, among others, in the western portion of the street the Schauspielhaus
Munich Kammerspiele
The Munich Kammerspiele is a successful German language theatre in Munich. The Schauspielhaus in the Maximilianstrasse is the major stage.-History:...
and in the eastern portion several state buildings like the building of the district government of Upper Bavaria (Friedrich Bürklein, 1856–1864), the Völkerkundemuseum
State Museum of Ethnology
The Bavarian State Museum of Ethnology in Munich, Germany is a museum for Non-European artworks and objects of cultural value.-The building:...
(Museum of Ethnology, built by Eduard Riedel
Eduard Riedel
Eduard Riedel was a German architect and Bavarian government building officer. Among other things he is known for his contribution to the construction of Neuschwanstein Castle.Riedel was born on 1 February 1813 in Bayreuth...
, 1858–1865) and the building of the Wilhelmsgymnasium
Wilhelmsgymnasium (Munich)
The Wilhelmsgymnasium of Munich is a school of academic secondary education. It is very famous for various reasons: it is the oldest grammar school in Munich; it has had several famous students; since 2004 it has been the only school in Bavaria that can claim to be a "Humanistisches Gymnasium";...
(built by Carl Leimbach, 1875–1877). After crossing the river Isar
Isar
The Isar is a river in Tyrol, Austria and Bavaria, Germany. Its source is in the Karwendel range of the Alps in Tyrol; it enters Germany near Mittenwald, and flows through Bad Tölz, Munich, and Landshut before reaching the Danube near Deggendorf. At 295 km in length, it is the fourth largest river...
further east, the avenue circles the palatial Maximilianeum
Maximilianeum
The Maximilianeum, a palatial building in Munich, was built as the home of a gifted students' foundation and has also housed the Bavarian Landtag since 1949.The principal was King Maximilian II of Bavaria, who started the project in 1857...
(Friedrich Bürklein, 1857–1874), home of a gifted students´ foundation and the Bavarian Landtag
Landtag of Bavaria
The Landtag of Bavaria is the unicameral legislature of the state of Bavaria in Germany. Between 1946 and 1999 there was an upper house, the Senate of Bavaria. The parliament meets in the Maximilianeum....
(state parliament). The opening in the middle of the Maximilianstrasse for the new circular road Altstadtring after World War II still disturbs the appearance.

The Maxmonument in the middle of the eastern part of the avenue is dedicated to King Maximilian II of Bavaria and was sculpted by Kaspar von Zumbusch
Kaspar von Zumbusch
Kaspar [Clemens] von Zumbusch was a German sculptor, born at Herzebrock, Westphalia, who became a pre-eminent sculptor of neo-Baroque monuments in Vienna....
. In the south the dome of St. Lukas
St. Lukas (Munich)
St. Lukas is an Evangelical Lutheran Church church in Munich, southern Germany. It was built in 1893-1896, designed by Albert Schmidt. St. Lukas is the only one almost perfectly preserved Protestant parish church of the historical Munich.-References:- External links :*...
is visible.

The western portion of Maximilianstrasse is known for its galleries, designer shops, luxury boutiques, jewellery stores, and one of Munich's foremost five-star hotels, the Hotel Vier Jahreszeiten (Kempinski, built by Rudolf Gottgetreu, 1856–1858).

Dolce & Gabbana
Dolce & Gabbana
Dolce & Gabbana is an Italian luxury industry fashion house. The company was started by the Italian designers Domenico Dolce and Stefano Gabbana in Milan, Italy. By 2005 their turnover was €597 million....
, Versace
Versace
Gianni Versace S.p.A. , usually referred to as Versace, is an Italian fashion label founded by Gianni Versace in 1978.The first Versace boutique was opened in Milan's Via della Spiga in 1978, and its popularity was immediate. Today, Versace is one of the world's leading international fashion houses...
, Louis Vuitton
Louis Vuitton
Louis Vuitton Malletier – commonly referred to as Louis Vuitton , or shortened to LV – is a French fashion house founded in 1854 by Louis Vuitton. The label is well known for its LV monogram, which is featured on most products, ranging from luxury trunks and leather goods to ready-to-wear, shoes,...
, Dior
Dior
Dior can mean:* Christian Dior SA, a French clothing retailer* In J. R. R. Tolkien's fictional Middle-earth legendarium:**Dior Eluchíl, a Half-elven of the First Age**Dior , a Steward of GondorDior is a surname, and may refer to:...
, Chanel
Chanel
Chanel S.A. is a French fashion house founded by the couturier Gabrielle "Coco" Chanel, well established in haute couture, specializing in luxury goods . She gained the name "Coco" while maintaining a career as a singer at a café in France...
, Escada
Escada
Escada is an international luxury fashion group in women's designer clothing. The company has a presence in about 60 different countries. Its main sales markets are North America, western and eastern Europe and Asia. It filed bankruptcy in August 2009, and was acquired by Megha Mittal, in November...
, Hugo Boss
Hugo Boss
Hugo Ferdinand Boss was the founder of clothing company Hugo Boss.-Early life:Boss was born in Metzingen, Germany. After completing his apprenticeship and one year of employment, he founded his own company in Metzingen in 1923.-Support of Nazism:Boss joined the Nazi Party in 1931, two years before...
, Gucci
Gucci
The House of Gucci, better known simply as Gucci , is an Italian fashion and leather goods label, part of the Gucci Group, which is owned by French company PPR...
, Gianfranco Ferré
Gianfranco Ferrè
Gianfranco Ferré was a fashion designer also known as "the architect of fashion" for his background and his original attitude toward creating fashion design....
, Bulgari
Bulgari
Bulgari is an Italian jeweler and luxury goods retailer which has been owned by the French firm LVMH since October 2011. The trademark is usually written "BVLGARI" in the classical Latin alphabet , and is derived from the surname of the company's Greek founder, Sotirio Voulgaris...
and many other famous shops keep branches in the Maximilianstrasse. They have increasingly ousted the traditional shops, art galleries and restaurants.
The source of this article is wikipedia, the free encyclopedia.  The text of this article is licensed under the GFDL.