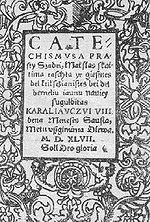 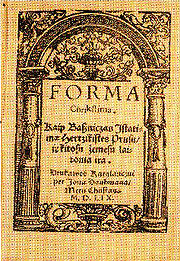 Martynas Mažvydas is a summary or exposition of doctrine, traditionally used in Christian religious teaching from New Testament times to the present...
(The Simple Words of Catechism), that was the beginning of literature and printing in Lithuanian. The book was printed in Königsberg
Königsberg
Königsberg was the capital of East Prussia from the Late Middle Ages until 1945 as well as the northernmost and easternmost German city with 286,666 inhabitants . Due to the multicultural society in and around the city, there are several local names for it...
.

The book consists of the dedication in Latin To the Grand Duchy of Lithuania, two prefaces: one in Latin (in prose), and one in Lithuanian (in verse), a primer, the catechism, and the book of songs. The rhymed preface in Lithuanian, The Appeal of The Small Book Itself Unto Lithuanians and Samogitians, is the first authentic verse in Lithuanian. An acrostic
Acrostic
An acrostic is a poem or other form of writing in which the first letter, syllable or word of each line, paragraph or other recurring feature in the text spells out a word or a message. As a form of constrained writing, an acrostic can be used as a mnemonic device to aid memory retrieval. A famous...
, the initial letters of its lines from 3 to 19 downwards, form the name of the author, Martinus Masvidius, thus confirming his authorship.

The prefaces state the aims of the author, namely, to educate people and spread culture, to fight the remains of heathen beliefs, and to consolidate the Protestant religion. The style of the preface is distinctly rhetorical; it is the most prominent example of syntactical-intonational prosody in Lithuanian literature.