Encyclopedia
The Möhne Reservoir is an artificial lake
Lake
A lake is a body of relatively still fresh or salt water of considerable size, localized in a basin, that is surrounded by land. Lakes are inland and not part of the ocean and therefore are distinct from lagoons, and are larger and deeper than ponds. Lakes can be contrasted with rivers or streams,...
in North Rhine-Westphalia
North Rhine-Westphalia
North Rhine-Westphalia is the most populous state of Germany, with four of the country's ten largest cities. The state was formed in 1946 as a merger of the northern Rhineland and Westphalia, both formerly part of Prussia. Its capital is Düsseldorf. The state is currently run by a coalition of the...
, some 45 km east of Dortmund
Dortmund
Dortmund is a city in Germany. It is located in the Bundesland of North Rhine-Westphalia, in the Ruhr area. Its population of 585,045 makes it the 7th largest city in Germany and the 34th largest in the European Union....
. The dam was built between 1908 and 1913 to help control floods, regulate water levels on the Ruhr river downstream, and generate hydropower
Hydropower
Hydropower, hydraulic power, hydrokinetic power or water power is power that is derived from the force or energy of falling water, which may be harnessed for useful purposes. Since ancient times, hydropower has been used for irrigation and the operation of various mechanical devices, such as...
. Today, the lake is also a tourist attraction. The lake is formed by the damming of two rivers, Möhne
Möhne
The Möhne is a small-size river in western Germany , right tributary of the Ruhr. The Möhne passes the towns of Brilon, Rüthen, Warstein. There is large articifical lake near the mouth of the river, the Möhne Reservoir, used for hydro power generation and leisure activities....
and Heve, and with its four basins stores as much as 135 million cubic metres of water. 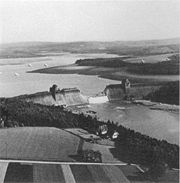 The dam (51.489307°N 8.058772°E) was destroyed by British bombers (“The Dambusters”
No. 617 Squadron RAF
No. 617 Squadron is a Royal Air Force aircraft squadron based at RAF Lossiemouth in Scotland. It currently operates the Tornado GR4 in the ground attack and reconnaissance role...
) during Operation Chastise
Operation Chastise
Operation Chastise was an attack on German dams carried out on 16–17 May 1943 by Royal Air Force No. 617 Squadron, subsequently known as the "Dambusters", using a specially developed "bouncing bomb" invented and developed by Barnes Wallis...
on the night of 16–17 May 1943, together with the Edersee
Edersee
The Edersee Dam is a hydroelectric dam constructed between 1908 to 1914 across the Eder river, near the small town of Waldeck in northern Hesse, Germany, it lies at the northern edge of the Kellerwald...
dam in northern Hesse
Hesse
Hesse or Hessia is both a cultural region of Germany and the name of an individual German state.* The cultural region of Hesse includes both the State of Hesse and the area known as Rhenish Hesse in the neighbouring Rhineland-Palatinate state...
. Special bouncing bomb
Bouncing bomb
A bouncing bomb is a bomb designed specifically to bounce to a target across water in a calculated manner, in order to avoid obstacles such as torpedo nets, and to allow both the bomb's speed on arrival at the target and the timing of its detonation to be pre-determined...
s had been constructed which were able to skip over the protective nets that hung in the water. A huge hole of 77 m by 22 m was blown into the dam. The resulting huge floodwave killed at least 1579 people, 1026 of them foreign forced labourers held in camps downriver. The small city of Neheim-Hüsten was particularly hard-hit with over 800 victims, among them at least 526 victims in a camp for Russian women held for forced labour. 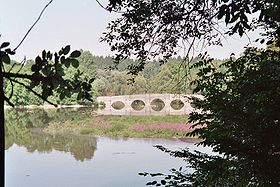 Though the Organisation Todt
Organisation Todt
The Todt Organisation, was a Third Reich civil and military engineering group in Germany named after its founder, Fritz Todt, an engineer and senior Nazi figure...
quickly repaired the dams with forced labourers commandeered from the construction of the Atlantic Wall
Atlantic Wall
The Atlantic Wall was an extensive system of coastal fortifications built by Nazi Germany between 1942 and 1944 along the western coast of Europe as a defense against an anticipated Allied invasion of the mainland continent from Great Britain.-History:On March 23, 1942 Führer Directive Number 40...
, the impact of the raid on German industry in the Ruhr valley and indeed on the civil population was significant. In the Möhne and Ruhr valleys, 11 factories were totally destroyed, 114 seriously damaged, 25 road and rail bridges were destroyed and throughout the region power, water and gas supplies were seriously disrupted. Industry production was back at normal level by September, however.
The source of this article is wikipedia, the free encyclopedia.  The text of this article is licensed under the GFDL.