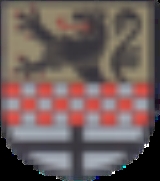 The district was created in 1975 as part of the reorganization of North Rhine-Westphalia
North Rhine-Westphalia
North Rhine-Westphalia is the most populous state of Germany, with four of the country's ten largest cities. The state was formed in 1946 as a merger of the northern Rhineland and Westphalia, both formerly part of Prussia. Its capital is Düsseldorf. The state is currently run by a coalition of the...
n districts. The former districts of Lüdenscheid and Iserlohn, together with the City of Iserlohn
Iserlohn
Iserlohn is a city in the Märkischer Kreis district, in North Rhine-Westphalia, Germany. It is the largest city by population and area within the district and the Sauerland region.-Geography:...
, previously an urban district, plus the area around Balve
Balve
Balve is a town in the Märkischer Kreis district, North Rhine-Westphalia, Germany. It is located in Hönnetal, a narrow valley created by the river Hönne, which is near the Sorpesee, formerly part of Balve, and at the north end of the Sauerland, near Dortmund...
(previously part of Arnsberg District) were amalgamated to form the new district. Lüdenscheid District itself had been created just a few years earlier, in 1968, when the city of Lüdenscheid was merged with Altena District (originally created in 1753). The name Märkischer Kreis was chosen in recognition of the fact that part of the territory formerly belonged to the county of the Mark
Mark (county)
The County of Mark was a county and state of the Holy Roman Empire in the Lower Rhenish-Westphalian Circle. It lay on both sides of the Ruhr River along the Volme and Lenne Rivers....
.

Twinning with Wrexham County Borough (Wales
Wales
Wales is a country that is part of the United Kingdom and the island of Great Britain, bordered by England to its east and the Atlantic Ocean and Irish Sea to its west. It has a population of three million, and a total area of 20,779 km²...
, United Kingdom) dates from 1970 and was initiated by the precursor district, Iserlohn.

In 1992 a twinning agreement was reached with the Finsterwalde District of Brandenburg
Brandenburg
Brandenburg is one of the sixteen federal-states of Germany. It lies in the east of the country and is one of the new federal states that were re-created in 1990 upon the reunification of the former West Germany and East Germany. The capital is Potsdam...
, unofficial relations between the two districts having existed since German reunification in 1990. Following Finsterwald's merger with the district of Elbe-Elster
Elbe-Elster
Elbe-Elster is a Kreis in the southern part of Brandenburg, Germany. Neighboring districts are Teltow-Fläming, Dahme-Spreewald, Oberspreewald-Lausitz, Meißen,Nordsachsen and Wittenberg...
, twinning with the new district was reconfirmed in 1996.

In 2001 a twinning agreement was officially established with the Polish
Poland
Poland , officially the Republic of Poland , is a country in Central Europe bordered by Germany to the west; the Czech Republic and Slovakia to the south; Ukraine, Belarus and Lithuania to the east; and the Baltic Sea and Kaliningrad Oblast, a Russian exclave, to the north...
district of Racibórz
Racibórz
Racibórz is a town in southern Poland with 60,218 inhabitants situated in the Silesian Voivodeship , previously in Katowice Voivodeship...
.

Geographically speaking, the Märkischer Kreis covers the northwestern part of the Sauerland
Sauerland
The Sauerland is a rural, hilly area spreading across most of the south-eastern part of North Rhine-Westphalia, in parts heavily forested and, apart from the major valleys, sparsely inhabited...
mountains, south of the Ruhr valley. The highest point, at 683 metres above sea level, is the Nordhelle. The district's principal river is the Lenne
Lenne
The Lenne is a river in the Sauerland area in North Rhine-Westphalia, western Germany, a left tributary of the Ruhr.Having its source on top of the Kahler Asten near Winterberg in an intermittent spring at an elevation of 2,687 feet, the Lenne ends after a course of 128 km flowing into the...
, another river is the Hönne
Hönne
The Hönne is a left tributary river to the Ruhr, flowing through the northern Sauerland hills in North Rhine-Westphalia, Germany. The spring of the Hönne is located in the west of Neuenrade at 437m above sea level. After 33 km the river ends near the town of Fröndenberg...
. Although most of the district is covered by forest and is rather sparsely inhabited, the area has had a long industrial history: it was, in fact, the very abundance of timber in the area which made steel
Steel
Steel is an alloy that consists mostly of iron and has a carbon content between 0.2% and 2.1% by weight, depending on the grade. Carbon is the most common alloying material for iron, but various other alloying elements are used, such as manganese, chromium, vanadium, and tungsten...
-working possible here long before Ruhr coal became readily available.

The county council meets in the county hall in Iserlohn. Its last election was on September 26, 2004.

The Luisenhütte is an industrial monument in Balve
Balve
Balve is a town in the Märkischer Kreis district, North Rhine-Westphalia, Germany. It is located in Hönnetal, a narrow valley created by the river Hönne, which is near the Sorpesee, formerly part of Balve, and at the north end of the Sauerland, near Dortmund...
.