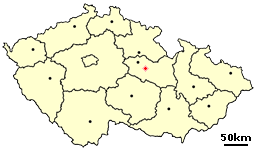 Ležáky was a settlement inhabited by poor stone-cutters and little cottagers. It was composed of eight houses concentrated near the mill; this mill had created the basis for the village named after the rivulet Ležák.

In December 1941 several paratroopers were dropped into the Protectorate Bohemia and Moravia, some of them were sent to assassinate Reinhard Heydrich
Reinhard Heydrich
Reinhard Tristan Eugen Heydrich , also known as The Hangman, was a high-ranking German Nazi official.He was SS-Obergruppenführer and General der Polizei, chief of the Reich Main Security Office and Stellvertretender Reichsprotektor of Bohemia and Moravia...
(see Operation Anthropoid
Operation Anthropoid
Operation Anthropoid was the code name for the targeted killing of top German SS leader Reinhard Heydrich. He was the chief of the Reich Main Security Office , the acting Protector of Bohemia and Moravia, and a chief planner of the Final Solution, the Nazi German programme for the genocide of the...
for details). Another group were part of Operation Silver A and several people from Ležáky helped them, providing a hiding place for their radio station. After the assassination of Heydrich (May 27, 1942) the revenge of the Nazis started with martial law.

On June 10 the village of Lidice
Lidice
Lidice is a village in the Czech Republic just northwest of Prague. It is built on the site of a previous village of the same name which, as part of the Nazi Protectorate of Bohemia and Moravia, was on orders from Reichsführer-SS Heinrich Himmler, completely destroyed by German forces in reprisal...
was razed to the ground and its male inhabitants shot. On June 24 over 500 armed Germans surrounded Ležáky, took away all the inhabitants and set the village on fire. In Pardubice
Pardubice
Pardubice is the capital city of the Pardubice Region and lies on the river Elbe, 65 miles east of Prague. Pardubice has an antique centre square and old town, with many restaurants that stay open until late in the evening. There is an old Tower and a recently renovated Castle...
32 villagers (both men and women) were shot and burned in local crematorium; 13 children were separated. On June 26 a press release announced the event publicly. Before the Christmas of 1943, the débris of Ležáky was pulled down.

Two of the children were selected for the 'Aryanisation' programme (both were found and returned after the war); the remaining 11 were sent to the Chełmno extermination camp and in summer 1942 gassed (together with children from Lidice).

Unlike Lidice, Ležáky was not rebuilt after the war, and only memorials exist today.