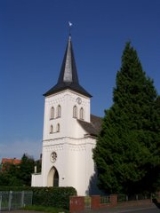 Encyclopedia
Lüdinghausen is a municipality in the district of Coesfeld
Coesfeld (district)
Coesfeld is a Kreis in the northwestern part of North Rhine-Westphalia, Germany, west of the city of Münster. Neighboring districts are Steinfurt, district-free Münster, Warendorf, district-free Hamm, Unna, Recklinghausen, Borken.- History :...
in the state of North Rhine-Westphalia
North Rhine-Westphalia
North Rhine-Westphalia is the most populous state of Germany, with four of the country's ten largest cities. The state was formed in 1946 as a merger of the northern Rhineland and Westphalia, both formerly part of Prussia. Its capital is Düsseldorf. The state is currently run by a coalition of the...
, Germany
Germany
Germany , officially the Federal Republic of Germany , is a federal parliamentary republic in Europe. The country consists of 16 states while the capital and largest city is Berlin. Germany covers an area of 357,021 km2 and has a largely temperate seasonal climate...
. It is located on the Dortmund-Ems Canal
Dortmund-Ems Canal
The Dortmund–Ems Canal is a 269 km long canal in Germany between the inland port of the city of Dortmund and the sea port of Emden. The artificial southern part of the canal ends after 215 km at the lock of Herbrum near Meppen. From there, the route goes over a length of 45 km over...
, approx. 25 km south-west of Münster
Münster
Münster is an independent city in North Rhine-Westphalia, Germany. It is located in the northern part of the state and is considered to be the cultural centre of the Westphalia region. It is also capital of the local government region Münsterland...
. It is known for its three castles, among them Burg Vischering
Burg Vischering
Burg Vischering in Lüdinghausen, North Rhine-Westfalia is the most typical moated castle in the Münster Region of Germany. This region has one of the highest German concentrations of castles, palaces and fortifications, Lüdinghausen having three by itself. The castle consists of outer defensive...
.

Lüdinghausen was founded in the thirteenth century and received its first city charter around 1308.

Lüdinghausen has been paired
Town twinning
Twin towns and sister cities are two of many terms used to describe the cooperative agreements between towns, cities, and even counties in geographically and politically distinct areas to promote cultural and commercial ties.- Terminology :...
as a Sister City with Deerfield, Illinois
Deerfield, Illinois
Deerfield is a village in Lake County, Illinois, United States and is located approximately 25 miles north of Chicago, Illinois. A portion of the village is in Cook County, Illinois, United States...
in the US.