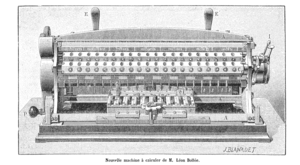 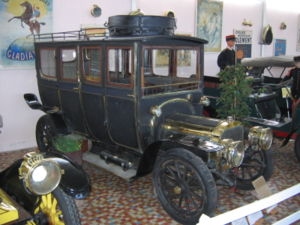 Bollée's family were well known bellfounders and his father, Amédée Bollée
Amédée Bollée
Amédée-Ernest Bollée was a French bellfounder and inventor who specialized in steam cars. After 1867 he was known as "Amédée père" to distinguish him from his similarly named son, Amédée-Ernest-Marie Bollée .-Biography:...
(1844–1917), was the major pioneer in the automobile industry who produced several steam car
Steam car
A steam car is a light car powered by a steam engine.Steam locomotives, steam engines capable of propelling themselves along either road or rails, developed around one hundred years earlier than internal combustion engine cars although their weight restricted them to agricultural and heavy haulage...
s. Both Léon Bollée and his older brother Amédée-Ernest-Marie (1867–1926) became automobile manufacturers.

In 1887 Bollée began work on three calculating machines: the Direct Multiplier, the Calculating Board and the Arithmographe. Bollée's Multiplier was the second successful direct-multiplying calculator (the first was Ramón Verea's) and it won a gold medal at the 1889 Paris Exposition. Three versions of the large multiplier and several smaller machines were developed by Bollée and the devices were patented in France, Belgium, Germany, the USA and Hungary.

In 1892, his father, Amédée Bollée
Amédée Bollée
Amédée-Ernest Bollée was a French bellfounder and inventor who specialized in steam cars. After 1867 he was known as "Amédée père" to distinguish him from his similarly named son, Amédée-Ernest-Marie Bollée .-Biography:...
produced a steam locomotive
Steam locomotive
A steam locomotive is a railway locomotive that produces its power through a steam engine. These locomotives are fueled by burning some combustible material, usually coal, wood or oil, to produce steam in a boiler, which drives the steam engine...
for the Chemin de Fer du Finistère.

Bollée and his father entered a steam car, La Nouvelle, in the 1895 Paris–Bordeaux–Paris race and Bollée went on to develop a gasoline-powered vehicle
Petrol engine
A petrol engine is an internal combustion engine with spark-ignition, designed to run on petrol and similar volatile fuels....
in 1895 which was entered in the 1896 Paris–Marseille–Paris race.

Bollée founded the company Léon Bollée Automobiles
Léon Bollée Automobiles
Léon Bollée Automobiles was a French company founded by Léon Bollée in Le Mans to build a first vehicle called "Voiturette".The Bollée family, all car makers, created three brands:* steam vehicles, Amédée Bollée , built between 1873 and 1885....
in 1895 in Le Mans
Le Mans
Le Mans is a city in France, located on the Sarthe River. Traditionally the capital of the province of Maine, it is now the capital of the Sarthe department and the seat of the Roman Catholic diocese of Le Mans. Le Mans is a part of the Pays de la Loire region.Its inhabitants are called Manceaux...
. In 1896 he patented and began manufacturing the three-wheeled vehicles he had invented in 1895 which he called the Voiturette
Voiturette
Voiturette is a word mostly used to describe a miniature automobile; however, it has several nuanced meanings, depending largely on the usage date.-History:...
(which can be translated as autoette). These had a horizontal motor and were equipped, for the first time, with rubber tire
Tire
A tire or tyre is a ring-shaped covering that fits around a wheel rim to protect it and enable better vehicle performance by providing a flexible cushion that absorbs shock while keeping the wheel in close contact with the ground...
s. A new model with many modifications was brought to the 1897 Paris-Dieppe race, driven by Paul Jamin , and the Paris-Trouville race and won both events with respective speeds of 24 mi/h and 28 mi/h.

By 1903, Bollée had started producing larger vehicles and soon gained a good reputation for quality. When the Wright brothers
Wright brothers
The Wright brothers, Orville and Wilbur , were two Americans credited with inventing and building the world's first successful airplane and making the first controlled, powered and sustained heavier-than-air human flight, on December 17, 1903...
visited France to show their aircraft, Bollée let them use his Mans
Le Mans
Le Mans is a city in France, located on the Sarthe River. Traditionally the capital of the province of Maine, it is now the capital of the Sarthe department and the seat of the Roman Catholic diocese of Le Mans. Le Mans is a part of the Pays de la Loire region.Its inhabitants are called Manceaux...
factory.

Léon Bollée was injured in a flying accident in 1911 and never really recovered as he also had a pre-existing heart problem and died in 1913. His widow continued to run the company but in 1922 it was bought by the Morris Motor Company
Morris Motor Company
The Morris Motor Company was a British car manufacturing company. After the incorporation of the company into larger corporations, the Morris name remained in use as a marque until 1984 when British Leyland's Austin Rover Group decided to concentrate on the more popular Austin marque...
and the company was renamed Morris-Léon Bollée, the intention being to use the new company to sell Morris designs in France and circumvent the then current French import restrictions. Morris sold the company in 1931 to a group of investors who renamed it Societé Nouvelle Léon Bollée and production continued until 1933.

Bollée's daughter Élisabeth, a poet, married the Count Jean Maurice Gilbert de Vautibault in 1927. She later divorced de Vautibault to marry the artist Julien Binford
Julien Binford
Julien Binford was an American painter. He studied at the Art Institute of Chicago and then in France. Settling in Powhatan County, Virginia, he was known for his paintings of the rural population of his neighborhood as well as for his murals. During World War II he lived in New York and painted...
. She died July 11, 1984.