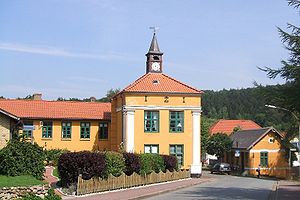 Kupfermühle belonged to Bov Parish until the establishment of the present border in 1920 when the rest of the parish opted to become Danish. The village now belongs to the Gemeinde Harrislee
Harrislee
Harrislee is a municipality in the district of Schleswig-Flensburg, in Schleswig-Holstein, Germany. It is situated on the border with Denmark, approx. 4 km northwest of Flensburg....
.

Kupfermühle was the home of the first factory in Schleswig
Schleswig
Schleswig or South Jutland is a region covering the area about 60 km north and 70 km south of the border between Germany and Denmark; the territory has been divided between the two countries since 1920, with Northern Schleswig in Denmark and Southern Schleswig in Germany...
, which is the reason behind the settlement's name. The copper mill was founded by king Christian IV of Denmark
Christian IV of Denmark
Christian IV was the king of Denmark-Norway from 1588 until his death. With a reign of more than 59 years, he is the longest-reigning monarch of Denmark, and he is frequently remembered as one of the most popular, ambitious and proactive Danish kings, having initiated many reforms and projects...
in 1612 and produced finished copper
Copper
Copper is a chemical element with the symbol Cu and atomic number 29. It is a ductile metal with very high thermal and electrical conductivity. Pure copper is soft and malleable; an exposed surface has a reddish-orange tarnish...
products and later also products in brass
Brass
Brass is an alloy of copper and zinc; the proportions of zinc and copper can be varied to create a range of brasses with varying properties.In comparison, bronze is principally an alloy of copper and tin...
. Among its products were pipes and sheet copper for copper roofs but also utensils such as buckets, pots, kettles and candlesticks. The copper production flourished in 1914 when the factory employed more than 200 workers. It went bankrupt
Bankruptcy
Bankruptcy is a legal status of an insolvent person or an organisation, that is, one that cannot repay the debts owed to creditors. In most jurisdictions bankruptcy is imposed by a court order, often initiated by the debtor....
in 1962.

Both the 17th century factory buildings and the workers' residences are preserved. The latter are known in Danish as nyboder and show great similarities with Christian's contemporary buildings in the Copenhagen
Copenhagen
Copenhagen is the capital and largest city of Denmark, with an urban population of 1,199,224 and a metropolitan population of 1,930,260 . With the completion of the transnational Øresund Bridge in 2000, Copenhagen has become the centre of the increasingly integrating Øresund Region...
district of Nyboder
Nyboder
Nyboder is a historic row house district of former Naval barracks in Copenhagen, Denmark. It was planned and first built by Christian IV to accommodate a need for housing for the personnel of the rapidly growing Royal Danish Navy and their families during that time...
. The village is now home to a museum which displays a large number of copper and brass products produced by the mill.