The Krämerbrücke is a bridge in the Thuringia
Thuringia
The Free State of Thuringia is a state of Germany, located in the central part of the country.It has an area of and 2.29 million inhabitants, making it the sixth smallest by area and the fifth smallest by population of Germany's sixteen states....
n city of Erfurt
Erfurt
Erfurt is the capital city of Thuringia and the main city nearest to the geographical centre of Germany, located 100 km SW of Leipzig, 150 km N of Nuremberg and 180 km SE of Hannover. Erfurt Airport can be reached by plane via Munich. It lies in the southern part of the Thuringian...
in Germany which is covered with inhabited, half timbered  buildings on both sides. It is unique in Europe north of the Alps. The footbridge spans the Breitstrom, a branch of Gera River
Gera River
The Gera is a river in Thuringia, Germany, a right tributary of the Unstrut. It originates in the Thuringian Forest, west of Ilmenau. The Gera is formed in Plaue, by the confluence of the Wilde Gera and the Zahme Gera. It empties into the Unstrut in Straußfurt. The total length of the Gera is...
, connecting Benediktsplatz and Wenigemarkt.

The bridge was built next to a ford
Ford (crossing)
A ford is a shallow place with good footing where a river or stream may be crossed by wading or in a vehicle. A ford is mostly a natural phenomenon, in contrast to a low water crossing, which is an artificial bridge that allows crossing a river or stream when water is low.The names of many towns...
and was part of the west-eastern trade route Via Regia
Via Regia
Via Regia, i.e. "Royal Highway", denotes a mediæval historic road. The term, in the usual sense, means not just a specific road, rather a type of road. It was legally associated with the king and remained under his special protection and guarantee of public peace.There were many such roads in the...
. Originally constructed from wood, it was first mentioned in 1117 after its destruction by one of the many fires. Its first documentary evidence as “pons rerum venalium” dates back to 1156. Already on this wooden bridge grocers had erected stands on both sides.

Because of repeated fires in 1175, 1178, 1213, 1222, 1245, 1265, and 1293 the municipal administration acquired all bridge rights from the monasteries in 1293 in order to build a stone bridge, which was finished in 1325 with uninhabited half-timbered stands on top of it. At both bridgehead
Bridgehead
A bridgehead is a High Middle Ages military term, which antedating the invention of cannons was in the original meaning expressly a referent term to the military fortification that protects the end of a bridge...
s stone churches with gate passages were erected, at the western end St. Benedicti and at the eastern end St. Aegidien, which had existed as a bridge chapel in beforehand (first mentioned in 1110).

The 79 m long arch bridge
Arch bridge
An arch bridge is a bridge with abutments at each end shaped as a curved arch. Arch bridges work by transferring the weight of the bridge and its loads partially into a horizontal thrust restrained by the abutments at either side...
has been erected in lime- and sandstonework and since then consists of six visible barrel vaults with diametres from 4.8 m to 7.8 m.

After a city fire in 1472, which destroyed nearly half of the city and the stands on the bridge, it was reconstructed in its current form with then 62 half-timbered buildings. To make the three-storey houses of 13 m to 15 m height habitable, the deepness of the buildings was extended by the wooden “Sprengwerke” next to the arch vaults. The width of the bridge finished in 1486 since then amounts to 26 m with a space of 5.5 m between the two rows of houses. At the latest since 1510 the name Krämerbrücke (which means "grocers' bridge") was commonly used.

Till the 18th century the number of houses on the bridge had been reduced to 38, due to unification and reconstruction caused by fires. The church St. Benedicti was sold in 1807 and demolished in 1810 in order to build a new house. In 1895 its tower had to give place to the newly built “Rathausbrücke” (town hall bridge), which crosses the river parallel. For this project it was discussed to pull down the entire bridge.

Because of its special importance for the history of Erfurt and history of architecture in general, the Krämer Bridge was granted special preservation in GDR-times. All buildings were restored from 1967 to 1973 and extensive repair works were done to the vaults in 1985/1986 and 2002. Since then the bridge may be used by cars up to a weight of 11 tons. 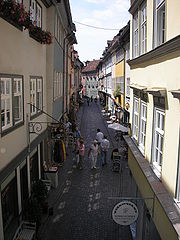 Currently mostly artisans' and antique shops can be found in the 32 houses on Krämer Bridge. Except for the houses numbers 15, 20, 24 and 33, all houses are municipal property. The building was and is a touristic highlight and a must-see.


The greatest city festival of Erfurt is named after the bridge: Krämerbrückenfest. It is held around the bridge and in the old town annually in June.