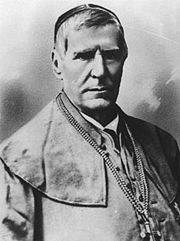 Book smugglers were people who transported Lithuanian language
Lithuanian language
Lithuanian is the official state language of Lithuania and is recognized as one of the official languages of the European Union. There are about 2.96 million native Lithuanian speakers in Lithuania and about 170,000 abroad. Lithuanian is a Baltic language, closely related to Latvian, although they...
books printed in the Latin alphabet
Latin alphabet
The Latin alphabet, also called the Roman alphabet, is the most recognized alphabet used in the world today. It evolved from a western variety of the Greek alphabet called the Cumaean alphabet, which was adopted and modified by the Etruscans who ruled early Rome...
into Lithuanian-speaking areas of the Russian Empire
Russian Empire
The Russian Empire was a state that existed from 1721 until the Russian Revolution of 1917. It was the successor to the Tsardom of Russia and the predecessor of the Soviet Union...
, defying a ban on such materials
Lithuanian press ban
The Lithuanian press ban was a ban on all Lithuanian language publications printed in the Latin alphabet within the Russian Empire, which controlled Lithuania at the time. Lithuanian-language publications that used the Cyrillic alphabet were allowed and even encouraged...
in force from 1866 to 1904. Opposing imperial Russian authorities' efforts to replace the traditional Latin orthography
Orthography
The orthography of a language specifies a standardized way of using a specific writing system to write the language. Where more than one writing system is used for a language, for example Kurdish, Uyghur, Serbian or Inuktitut, there can be more than one orthography...
with Cyrillic
Cyrillic alphabet
The Cyrillic script or azbuka is an alphabetic writing system developed in the First Bulgarian Empire during the 10th century AD at the Preslav Literary School...
, and transporting printed matter from as far away as the United States
United States
The United States of America is a federal constitutional republic comprising fifty states and a federal district...
to do so, the book smugglers became a symbol of Lithuanians' resistance to Russification
Russification
Russification is an adoption of the Russian language or some other Russian attributes by non-Russian communities...
.

In the summer of 1863 Tsar Alexander II issued Temporary Rules for State Junior Schools of the Northwestern Krai
Northwestern Krai
Northwestern Krai was a subdivision of Imperial Russia in the territories of the present day Belarus and Lithuania. Together with the Southwestern Krai it formed the Western Krai...
, ruling that only Russian-language education would be allowed there. In 1864 the Governor General of Vilna Governorate
Vilna Governorate
The Vilna Governorate or Government of Vilna was a governorate of the Russian Empire created after the Third Partition of the Polish-Lithuanian Commonwealth in 1795...
, Mikhail Muravyov
Mikhail Nikolayevich Muravyov-Vilensky
Count Mikhail Nikolayevich Muravyov was one of the most reactionary Russian imperial statesmen of the 19th century...
, ordered that Lithuanian language primers
Primer (textbook)
A primer is a first textbook for teaching of reading, such as an alphabet book or basal reader. The word also is used more broadly to refer to any book that presents the most basic elements of a subject....
were to be printed only in the Cyrillic alphabet. Muravyov's successor, Konstantin Kaufman, in 1865 banned all Lithuanian-language use of the Latin alphabet. In 1866 the Tsar issued an oral ban on the printing or importing of printed matter in Lithuanian. Although formally
De jure
De jure is an expression that means "concerning law", as contrasted with de facto, which means "concerning fact".De jure = 'Legally', De facto = 'In fact'....
, the order had no legal force, it was executed de facto
De facto
De facto is a Latin expression that means "concerning fact." In law, it often means "in practice but not necessarily ordained by law" or "in practice or actuality, but not officially established." It is commonly used in contrast to de jure when referring to matters of law, governance, or...
until 1904. During this time there were approximately 55 printings of Lithuanian books in Cyrillic.

Most of the Latin-alphabet Lithuanian-language books and periodicals published at the time were printed in Lithuania Minor and then smuggled into Lithuania. When caught, the book smugglers were punished by fines, banishment, and exile
Exile
Exile means to be away from one's home , while either being explicitly refused permission to return and/or being threatened with imprisonment or death upon return...
, including deportation to Siberia
Siberia
Siberia is an extensive region constituting almost all of Northern Asia. Comprising the central and eastern portion of the Russian Federation, it was part of the Soviet Union from its beginning, as its predecessor states, the Tsardom of Russia and the Russian Empire, conquered it during the 16th...
. Some of them were shot while crossing the border.

In 1867, Motiejus Valančius
Motiejus Valancius
Motiejus Valančius was a Catholic bishop of Samogitia, historian and one of the best known Lithuanian writers of the 19th century.-Biography:...
, the Bishop
Bishop
A bishop is an ordained or consecrated member of the Christian clergy who is generally entrusted with a position of authority and oversight. Within the Catholic Church, Eastern Orthodox, Oriental Orthodox Churches, in the Assyrian Church of the East, in the Independent Catholic Churches, and in the...
of Samogitia, began to organize and finance this printing abroad, and sponsored its illegal distribution within Lithuania. In 1870 his organization was uncovered, with the help of Prussian authorities, and five priests and two book smugglers were exiled to remote areas of Russia. Other book smugglers carried on his work. 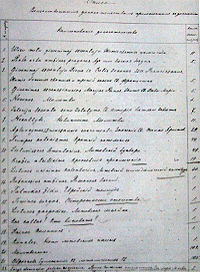 During the final years of the ban, an estimated 30,000 to 40,000 books were smuggled in annually. About one-third of them were seized by authorities. Lithuanian books reached every settlement in Lithuania, and many legal institutions served as undercover transfer points for the books. A number of secret organizations distributed the books throughout Lithuania, including Sietynas, Atgaja, Teisybė, Prievarta, Aušrinė, Atžala, Lizdas, Akstinas, Spindulys, Svirplys, Žiburėlis, Žvaigždė, and Kūdikis.

The ban's lack of success was recognized by the end of the 19th century, and in 1904, under the official pretext that the minorities within the Russian Empire needed to be pacified after the Russo-Japanese War
Russo-Japanese War
The Russo-Japanese War was "the first great war of the 20th century." It grew out of rival imperial ambitions of the Russian Empire and Japanese Empire over Manchuria and Korea...
, the ban on Lithuanian was lifted. In 1905, soon after the ban was lifted, one of the most renowned book smugglers, Juozas Masiulis, opened his own bookstore in Panevėžys
Panevežys
Panevėžys see also other names, is the fifth largest city in Lithuania. As of 2008, it occupied 50 square kilometers with 113,653 inhabitants. The largest multifunctional arena in Panevėžys is the Cido Arena...
. This bookstore is still operational, and a chain of bookstores operates in Lithuania under his name.