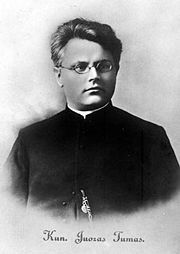 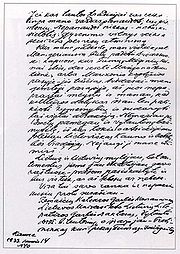 Juozas Tumas, also known by the pen name
Pen name
A pen name, nom de plume, or literary double, is a pseudonym adopted by an author. A pen name may be used to make the author's name more distinctive, to disguise his or her gender, to distance an author from some or all of his or her works, to protect the author from retribution for his or her...
Vaižgantas (September 20, 1869 - April 29, 1933), was a prominent Lithuania
Lithuania
Lithuania , officially the Republic of Lithuania is a country in Northern Europe, the biggest of the three Baltic states. It is situated along the southeastern shore of the Baltic Sea, whereby to the west lie Sweden and Denmark...
n writer, Roman Catholic
Roman Catholicism in Lithuania
The Roman Catholic Church in Lithuania is part of the worldwide Roman Catholic Church, under the spiritual leadership of the Pope and curia in Rome....
priest, social activist, literary historian, and one of the founders of the Party of National Progress
Party of National Progress
Party of National Progress or TPP is a political party in Lithuania. It was established in 1916. The party was named by the prominent Lithuanian activist and writer Juozas Tumas-Vaižgantas, who regarded progress as the main aspect of future politics. The party published its main goals in 1917,...
. He wrote novels, short fictional pieces, and non-fiction. His most notable works include the novel Pragiedruliai (Rays of Hope) and the narrative Dėdės ir dėdiėnes (Uncles and Aunts). Tumas is considered one of the most important Lithuanian writers of his era.

Juozas Tumas was born in the village of Malaišiai near Svėdasai
Svedasai
Svėdasai is a town in Utena County in the northern part of Lithuania, bearing a name from a nearby Lake Svėdasas. The name according to Kazimieras Būga is of Selonian origin....
into a farming family. He completed his elementary school
Elementary school
An elementary school or primary school is an institution where children receive the first stage of compulsory education known as elementary or primary education. Elementary school is the preferred term in some countries, particularly those in North America, where the terms grade school and grammar...
studies within two years, and studied at the gymnasium
Gymnasium (school)
A gymnasium is a type of school providing secondary education in some parts of Europe, comparable to English grammar schools or sixth form colleges and U.S. college preparatory high schools. The word γυμνάσιον was used in Ancient Greece, meaning a locality for both physical and intellectual...
in Daugavpils
Daugavpils
Daugavpils is a city in southeastern Latvia, located on the banks of the Daugava River, from which the city gets its name. Daugavpils literally means "Daugava Castle". With a population of over 100,000, it is the second largest city in the country after the capital Riga, which is located some...
, Latvia
Latvia
Latvia , officially the Republic of Latvia , is a country in the Baltic region of Northern Europe. It is bordered to the north by Estonia , to the south by Lithuania , to the east by the Russian Federation , to the southeast by Belarus and shares maritime borders to the west with Sweden...
from 1881 to 1888. During this time he developed an interest in Russian
Russian literature
Russian literature refers to the literature of Russia or its émigrés, and to the Russian-language literature of several independent nations once a part of what was historically Russia or the Soviet Union...
classic literature. Soon after graduation he enrolled in the Kaunas Priest Seminary
Kaunas Priest Seminary
Kaunas Priest Seminary is the largest seminary in Lithuania serving the Roman Catholic Archdiocese of Kaunas. It is part of the Faculty of Theology of Vytautas Magnus University. Its current rector is Aurelijus Žukauskas. As of 2007, the seminary had 35 students...
; he was ordained in 1893, and began his career as a writer.

A ban on publication
Lithuanian press ban
The Lithuanian press ban was a ban on all Lithuanian language publications printed in the Latin alphabet within the Russian Empire, which controlled Lithuania at the time. Lithuanian-language publications that used the Cyrillic alphabet were allowed and even encouraged...
in the Lithuanian language
Lithuanian language
Lithuanian is the official state language of Lithuania and is recognized as one of the official languages of the European Union. There are about 2.96 million native Lithuanian speakers in Lithuania and about 170,000 abroad. Lithuanian is a Baltic language, closely related to Latvian, although they...
was imposed by the Russian Empire
Russian Empire
The Russian Empire was a state that existed from 1721 until the Russian Revolution of 1917. It was the successor to the Tsardom of Russia and the predecessor of the Soviet Union...
from 1866 to 1904; Vaižgantas was accused of book smuggling
Knygnešiai
Book smugglers were people who transported Lithuanian language books printed in the Latin alphabet into Lithuanian-speaking areas of the Russian Empire, defying a ban on such materials in force from 1866 to 1904...
and interrogated, but was released for lack of evidence. His brother, however, was sentenced to exile in Siberia
Siberia
Siberia is an extensive region constituting almost all of Northern Asia. Comprising the central and eastern portion of the Russian Federation, it was part of the Soviet Union from its beginning, as its predecessor states, the Tsardom of Russia and the Russian Empire, conquered it during the 16th...
for this crime. Vaižgantas was advised to flee to the United States
United States
The United States of America is a federal constitutional republic comprising fifty states and a federal district...
, but chose to stay in Lithuania.

Juozas Tumas-Vaižgantas contributed to various Lithuanian newspapers, including Žinyčia and Tėvynės Sargas. As a result of these activities he was accused of being a "Lithuanian maniac". He was cleared of this charge, but was put on parole and forbidden to print anything without receiving direct permission from a bishop.

During the Great Seimas of Vilnius
Great Seimas of Vilnius
The Great Seimas of Vilnius , was a major assembly held on December 4 and 5, 1905 in Vilnius, Lithuania, then part of the Russian Empire, largely inspired by the Russian Revolution of 1905. It was the first modern national congress in Lithuania and dealt primarily not with the social issues that...
Juozas Tumas-Vaižgantas was a representative of the Lithuanian Christian Democratic Party; he was among those participants who voiced support for Lithuanian autonomy within the Russian Empire. In 1906 Vaižgantas settled in Vilnius
Vilnius
Vilnius is the capital of Lithuania, and its largest city, with a population of 560,190 as of 2010. It is the seat of the Vilnius city municipality and of the Vilnius district municipality. It is also the capital of Vilnius County...
and worked for the newspapers Vilniaus žinios
Vilniaus žinios
Vilniaus žinios was a short-lived newspaper published in Vilnius, Lithuania. It was the first legal Lithuanian-language daily newspaper to appear after the Lithuanian press ban was lifted on May 7, 1904.-History:...
, Viltis, and Ryto garsas. He was also active in various cultural organizations, particularly in the Lithuanian Science Society
Lithuanian Science Society
The Lithuanian Scientific Society was a scientific, cultural, and educational organization that was active between 1907 and 1940 in Vilnius, Lithuania. It was founded in 1907 on the initiative of Jonas Basanavičius....
, the Lithuanian Society of Arts, and in the Rūta Society. His strong anti-tsar
Tsar
Tsar is a title used to designate certain European Slavic monarchs or supreme rulers. As a system of government in the Tsardom of Russia and Russian Empire, it is known as Tsarist autocracy, or Tsarism...
ist stance and activities made him unpopular with the local clergy, and he was transferred among parishes several times.

During the years from 1911 to 1918 Tumas spent much of his time abroad. In 1911 he travelled to the United States, and collected donations to build the Saulė Educational Society headquarters. In 1914 he worked as an editor for the Latvian-based newspaper Rygos Garsas. In 1915 he worked in Saint Petersburg
Saint Petersburg
Saint Petersburg is a city and a federal subject of Russia located on the Neva River at the head of the Gulf of Finland on the Baltic Sea...
, organising the Lithuanian Central Relief Committee, which sought to mitigate the effects of World War I
World War I
World War I , which was predominantly called the World War or the Great War from its occurrence until 1939, and the First World War or World War I thereafter, was a major war centred in Europe that began on 28 July 1914 and lasted until 11 November 1918...
, and laid the foundations for the new Party of National Progress
Party of National Progress
Party of National Progress or TPP is a political party in Lithuania. It was established in 1916. The party was named by the prominent Lithuanian activist and writer Juozas Tumas-Vaižgantas, who regarded progress as the main aspect of future politics. The party published its main goals in 1917,...
. He also attended the Lithuanian Conference in Stockholm
Stockholm
Stockholm is the capital and the largest city of Sweden and constitutes the most populated urban area in Scandinavia. Stockholm is the most populous city in Sweden, with a population of 851,155 in the municipality , 1.37 million in the urban area , and around 2.1 million in the metropolitan area...
.

He returned to Lithuania in 1918; after Poland annexed Vilnius
Zeligowski's Mutiny
Żeligowski's Mutiny was a sham mutiny led by Polish General Lucjan Żeligowski in October 1920, which resulted in the creation of the short-lived Republic of Central Lithuania. Polish Chief of State Józef Piłsudski had surreptitiously ordered Żeligowski to carry out the operation, and revealed the...
in 1920, he was forced to relocate to the interwar capital of Lithuania, Kaunas
Kaunas
Kaunas is the second-largest city in Lithuania and has historically been a leading centre of Lithuanian economic, academic, and cultural life. Kaunas was the biggest city and the center of a powiat in Trakai Voivodeship of the Grand Duchy of Lithuania since 1413. During Russian Empire occupation...
. While in Kaunas Juozas Tumas-Vaižgantas lectured at the University of Lithuania
Vytautas Magnus University
Vytautas Magnus University ) is a public university in Kaunas, Lithuania. The university was founded in 1922 during the interwar period as an alternate national university...
, and in 1929 he received a doctorate honoris causa from the university. From 1920 to 1932 he served as rector
Rector
The word rector has a number of different meanings; it is widely used to refer to an academic, religious or political administrator...
of Vytautas' the Great Church
Vytautas' the Great Church
Vytautas' the Great Church of the Assumption of The Holy Virgin Mary is a Roman Catholic church in the Old Town of Kaunas, Lithuania, and is one of the oldest churches in the city.-History:...
in Kaunas; he was buried in the church in 1933.

Vaižgantas was known for encouraging younger authors, and is sometimes known in Lithuania as "the diamond hunter." He downplayed his native Aukštaitija
Aukštaitija
Aukštaitija is the name of one of five ethnographic regions of Lithuania. The name comes from the relatively high elevation of the region, particularly the eastern parts.-Geography:...
n dialect, freely coined neologisms, and used dialects and borrowings from other languages when he felt they suited his literary purposes.

In 1997, a museum dedicated to Juozas Tumas-Vaižgantas was established in the Kaunas apartment where he lived and worked from 1920 until 1933. Another museum displaying his work is located in Panevėžys
Panevežys
Panevėžys see also other names, is the fifth largest city in Lithuania. As of 2008, it occupied 50 square kilometers with 113,653 inhabitants. The largest multifunctional arena in Panevėžys is the Cido Arena...
.