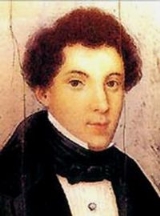 Juan Crisóstomo Arriaga was born in Bilbao
Bilbao
Bilbao ) is a Spanish municipality, capital of the province of Biscay, in the autonomous community of the Basque Country. With a population of 353,187 , it is the largest city of its autonomous community and the tenth largest in Spain...
, Biscay
Biscay
Biscay is a province of Spain and a historical territory of the Basque Country, heir of the ancient Lord of Biscay. Its capital city is Bilbao...
, on what would have been Mozart's fiftieth birthday. His father and older brother first taught him music. He then studied the violin
Violin
The violin is a string instrument, usually with four strings tuned in perfect fifths. It is the smallest, highest-pitched member of the violin family of string instruments, which includes the viola and cello....
under Pierre Baillot
Pierre Baillot
Pierre Marie François de Sales Baillot was a French violinist and composer.Baillot was born in Passy and studied the violin under Giovanni Battista Viotti...
, and counterpoint
Counterpoint
In music, counterpoint is the relationship between two or more voices that are independent in contour and rhythm and are harmonically interdependent . It has been most commonly identified in classical music, developing strongly during the Renaissance and in much of the common practice period,...
and harmony
Harmony
In music, harmony is the use of simultaneous pitches , or chords. The study of harmony involves chords and their construction and chord progressions and the principles of connection that govern them. Harmony is often said to refer to the "vertical" aspect of music, as distinguished from melodic...
under François-Joseph Fétis
François-Joseph Fétis
François-Joseph Fétis was a Belgian musicologist, composer, critic and teacher. He was one of the most influential music critics of the 19th century, and his enormous compilation of biographical data in the Biographie universelle des musiciens remains an important source of information today...
at the Paris Conservatoire. He was so talented that he soon became a teaching assistant in Fétis's class. He died in Paris at the age of nineteen, of a lung ailment, or exhaustion, perhaps both.

The amount of music by Arriaga which has survived to the present day is quite small, reflecting his early death. It includes:

Arriaga's music is "elegant and accomplished and notable for its harmonic warmth" (New Grove Concise Dictionary of Music). There is nothing characteristically Spanish or Basque in Arriaga's music. Rather it is international (European) music from the formative period between the late classical music of Mozart to the early Romanticism of the young Beethoven.

According to Grove, Arriaga's death "before he was 20 was a sad loss to Basque music." Following his early death, with the only reliable biographical material being some reports by Fétis, Arriaga's life story was fictionalized to play into rising Basque nationalism. A public theatre
Teatro Arriaga
The Teatro Arriaga is an opera house in Bilbao, Spain. It was built in Neo-baroque style by architect Joaquín Rucoba in 1890, the same architect that built the city hall...
in his home city of Bilbao
Bilbao
Bilbao ) is a Spanish municipality, capital of the province of Biscay, in the autonomous community of the Basque Country. With a population of 353,187 , it is the largest city of its autonomous community and the tenth largest in Spain...
carries his name.