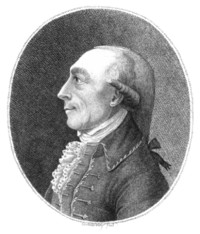 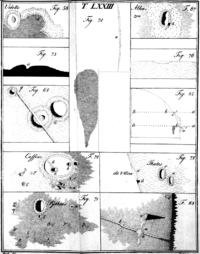 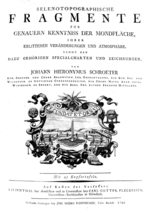 |-
|
Johann Hieronymus Schröter.
|
Samples from moon maps in the Selenetopographische Fragmente
|
Title page from the Selenetopographische Fragmente.
|}
Johann Hieronymus Schröter (August 30, 1745, Erfurt
Erfurt
Erfurt is the capital city of Thuringia and the main city nearest to the geographical centre of Germany, located 100 km SW of Leipzig, 150 km N of Nuremberg and 180 km SE of Hannover. Erfurt Airport can be reached by plane via Munich. It lies in the southern part of the Thuringian...
– August 29, 1816, Lilienthal
Lilienthal, Lower Saxony
The municipality of Lilienthal belongs to the administrative district of Osterholz, Lower Saxony and borders Bremen.-History:Lilienthal belonged to the Prince-Archbishopric of Bremen. The history of the city of Lilienthal goes back to its founding as a monastery by the prince-archbishop Gerhard II...
) was a German
Germans
The Germans are a Germanic ethnic group native to Central Europe. The English term Germans has referred to the German-speaking population of the Holy Roman Empire since the Late Middle Ages....
astronomer
Astronomer
An astronomer is a scientist who studies celestial bodies such as planets, stars and galaxies.Historically, astronomy was more concerned with the classification and description of phenomena in the sky, while astrophysics attempted to explain these phenomena and the differences between them using...
.

Schröter was born in Erfurt
Erfurt
Erfurt is the capital city of Thuringia and the main city nearest to the geographical centre of Germany, located 100 km SW of Leipzig, 150 km N of Nuremberg and 180 km SE of Hannover. Erfurt Airport can be reached by plane via Munich. It lies in the southern part of the Thuringian...
, and studied law at Göttingen University from 1762 until 1767, after which he started a ten-year-long legal practice.

In 1777 he was appointed Secretary of the Royal Chamber of George III in Hanover
Hanover
Hanover or Hannover, on the river Leine, is the capital of the federal state of Lower Saxony , Germany and was once by personal union the family seat of the Hanoverian Kings of Great Britain, under their title as the dukes of Brunswick-Lüneburg...
, where he made the acquaintance of two of William Herschel
William Herschel
Sir Frederick William Herschel, KH, FRS, German: Friedrich Wilhelm Herschel was a German-born British astronomer, technical expert, and composer. Born in Hanover, Wilhelm first followed his father into the Military Band of Hanover, but emigrated to Britain at age 19...
's brothers. In 1779 he acquired a three-foot-long (91 cm, almost one metre) achromatic
Achromatic lens
An achromatic lens or achromat is a lens that is designed to limit the effects of chromatic and spherical aberration. Achromatic lenses are corrected to bring two wavelengths into focus in the same plane....
refractor with 2.25 inches (57.2 mm) lens (50 mm) to observe the Sun
Sun
The Sun is the star at the center of the Solar System. It is almost perfectly spherical and consists of hot plasma interwoven with magnetic fields...
, Moon
Moon
The Moon is Earth's only known natural satellite,There are a number of near-Earth asteroids including 3753 Cruithne that are co-orbital with Earth: their orbits bring them close to Earth for periods of time but then alter in the long term . These are quasi-satellites and not true moons. For more...
and Venus
Venus
Venus is the second planet from the Sun, orbiting it every 224.7 Earth days. The planet is named after Venus, the Roman goddess of love and beauty. After the Moon, it is the brightest natural object in the night sky, reaching an apparent magnitude of −4.6, bright enough to cast shadows...
. Herschel's discovery of Uranus
Uranus
Uranus is the seventh planet from the Sun. It has the third-largest planetary radius and fourth-largest planetary mass in the Solar System. It is named after the ancient Greek deity of the sky Uranus , the father of Cronus and grandfather of Zeus...
in 1781 inspired Schröter to pursue astronomy
Astronomy
Astronomy is a natural science that deals with the study of celestial objects and phenomena that originate outside the atmosphere of Earth...
more seriously, and he resigned his post and became chief magistrate and district governor of Lilienthal
Lilienthal, Lower Saxony
The municipality of Lilienthal belongs to the administrative district of Osterholz, Lower Saxony and borders Bremen.-History:Lilienthal belonged to the Prince-Archbishopric of Bremen. The history of the city of Lilienthal goes back to its founding as a monastery by the prince-archbishop Gerhard II...
.

In 1784 he paid 31 Reichsthaler
Reichsthaler
The Reichsthaler was a standard Thaler of the Holy Roman Empire, established in 1566 by the Leipzig convention. It was also the name of a unit of account in northern Germany and of a silver coin issued by Prussia.-Reichsthaler coin:...
(about 600 Euros of today) for a Herschel reflector of 122 cm focal length and 12 cm aperture. He quickly gained a good name from his observational reports in journals, but was not satisfied and in 1786 paid 600 Reichstaler (an equivalent of six months earnings) for a 214 cm focal length 16.5 cm aperture reflector with eyepieces allowing up to 1,200 magnification, and 26 Thaler
Thaler
The Thaler was a silver coin used throughout Europe for almost four hundred years. Its name lives on in various currencies as the dollar or tolar. Etymologically, "Thaler" is an abbreviation of "Joachimsthaler", a coin type from the city of Joachimsthal in Bohemia, where some of the first such...
for a screw-micrometer. With this he systematically observed Venus, Mars
Mars
Mars is the fourth planet from the Sun in the Solar System. The planet is named after the Roman god of war, Mars. It is often described as the "Red Planet", as the iron oxide prevalent on its surface gives it a reddish appearance...
, Jupiter
Jupiter
Jupiter is the fifth planet from the Sun and the largest planet within the Solar System. It is a gas giant with mass one-thousandth that of the Sun but is two and a half times the mass of all the other planets in our Solar System combined. Jupiter is classified as a gas giant along with Saturn,...
and Saturn
Saturn
Saturn is the sixth planet from the Sun and the second largest planet in the Solar System, after Jupiter. Saturn is named after the Roman god Saturn, equated to the Greek Cronus , the Babylonian Ninurta and the Hindu Shani. Saturn's astronomical symbol represents the Roman god's sickle.Saturn,...
.

He made extensive drawings of the features of Mars, yet curiously he was always erroneously convinced that what he was seeing was mere cloud formations rather than geographical features. In 1791 he published an important early study on the topography of the Moon entitled Selenotopographische Fragmente zur genauern Kenntniss der Mondfläche. In 1793 he was the first to notice the phase anomaly of Venus, now known as the Schröter effect, where the phase appears more concave than geometry predicts.

In 1813, he suffered the disruptions of the Napoleonic Wars
Napoleonic Wars
The Napoleonic Wars were a series of wars declared against Napoleon's French Empire by opposing coalitions that ran from 1803 to 1815. As a continuation of the wars sparked by the French Revolution of 1789, they revolutionised European armies and played out on an unprecedented scale, mainly due to...
: his work was ruined by the French
France
The French Republic , The French Republic , The French Republic , (commonly known as France , is a unitary semi-presidential republic in Western Europe with several overseas territories and islands located on other continents and in the Indian, Pacific, and Atlantic oceans. Metropolitan France...
under Vandamme, who destroyed his books, writings and observatory. He never recovered from the catastrophe.

The lunar crater Schröter
Schröter (lunar crater)
Schröter is a lunar crater near the mid-part of the Moon, on the eastern Mare Insularum, and named after German astronomer Johann Hieronymus Schröter. It lies to the north of the craters Sömmering and Mösting. To the southeast of the crater rim is a rille named the Rima Schröter...
and the Martian crater Schroeter are named after him, as is Vallis Schröteri
Vallis Schröteri
Schroter's Valley, frequently known by the Latinized name Vallis Schröteri, is a sinuous valley or rille on the surface of the near side of the Moon. It is located on a rise of continental ground, sometimes called the Aristarchus plateau, that is surrounded by the Oceanus Procellarum to the south...
(Schröter's Valley) on the Moon.