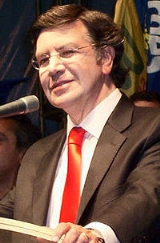 Encyclopedia
Joaquín José Lavín Infante (born 23 October 1953) is a Chile
Chile
Chile ,officially the Republic of Chile , is a country in South America occupying a long, narrow coastal strip between the Andes mountains to the east and the Pacific Ocean to the west. It borders Peru to the north, Bolivia to the northeast, Argentina to the east, and the Drake Passage in the far...
an politician
Politics of Chile
The politics of Chile takes place in a framework of a presidential representative democratic republic, whereby the President of Chile is both head of state and head of government, and of a formal multi-party system that in practice behaves like a two-party one, due to binominalism. Executive power...
and economist. He is a member of the Independent Democrat Union
Independent Democrat Union
The Independent Democrat Union is a Chilean right-wing, conservative political party, founded in 1983. Its main inspirer was the lawyer, politician and law professor Jaime Guzmán, a former senator of the Republic of Chile from 1990 until his assassination on April 1, 1991.Its ideological origins...
(UDI) party and former mayor of Santiago and Las Condes municipalities of capital Santiago
Santiago, Chile
Santiago , also known as Santiago de Chile, is the capital and largest city of Chile, and the center of its largest conurbation . It is located in the country's central valley, at an elevation of above mean sea level...
. He ran for president twice in 1999 and 2005, losing both times.

Lavín was born in Santiago
Santiago, Chile
Santiago , also known as Santiago de Chile, is the capital and largest city of Chile, and the center of its largest conurbation . It is located in the country's central valley, at an elevation of above mean sea level...
and earned a master's degree in economics
Economics
Economics is the social science that analyzes the production, distribution, and consumption of goods and services. The term economics comes from the Ancient Greek from + , hence "rules of the house"...
from the University of Chicago
University of Chicago
The University of Chicago is a private research university in Chicago, Illinois, USA. It was founded by the American Baptist Education Society with a donation from oil magnate and philanthropist John D. Rockefeller and incorporated in 1890...
. He wrote a book, Una revolución silenciosa ("A Quiet Revolution"), in support of General Augusto Pinochet
Augusto Pinochet
Augusto José Ramón Pinochet Ugarte, more commonly known as Augusto Pinochet , was a Chilean army general and dictator who assumed power in a coup d'état on 11 September 1973...
's economic policies. He was also political editor of the conservative Chilean daily El Mercurio
El Mercurio
El Mercurio is a conservative Chilean newspaper with editions in Valparaíso and Santiago. Its Santiago edition is considered the country's paper-of-record and its Valparaíso edition is the oldest daily in the Spanish language currently in circulation. El Mercurio is owned by El Mercurio S.A.P...
. Afterwards, in 1992, Lavín was elected mayor of Las Condes
Las Condes
Las Condes is a commune of Chile located in Santiago Province, Santiago Metropolitan Region. The area is inhabited primarily by upper-mid to high income families...
, a stronghold of the right, with 31% of the vote and reelected in 1997 with 78% of the vote.

Lavín was the presidential candidate for the UDI-National Renewal
National Renewal (Chile)
National Renewal , is a liberal conservative political party belonging to the Chilean right-wing political coalition Coalition for Change in conjunction with the Independent Democratic Union and the Chile First movement...
coalition Alliance for Chile
Alliance for Chile
The Alliance for Chile , also known simply as The Alliance , was a coalition of right-wing Chilean political parties.The Alliance was replaced in 2009 by the Coalition for Change....
in the 1999 election. He eventually lost to PS
Socialist Party of Chile
The Socialist Party of Chile is a political party, that is part of the center-left Coalition of Parties for Democracy coalition. Its historical leader was the late President of Chile Salvador Allende Gossens, who was deposed by General Pinochet in 1973...
/PPD
Party for Democracy
The Party for Democracy is a political party in Chile; it is social democratic in its political orientation. It was founded in December 1987 by Ricardo Lagos, who aimed at forming a legal social democratic party . The party continued to function after the defeat of Pinochet...
candidate Ricardo Lagos
Ricardo Lagos
Ricardo Froilán Lagos Escobar is a lawyer, economist and social democrat politician, who served as president of Chile from 2000 to 2006. He won the 1999-2000 presidential election by a narrow margin in a runoff over Independent Democrat Union candidate Joaquín Lavín...
in a runoff by 200,000 votes. Lavín again represented UDI in the 2005 presidential election, but ended in third place with 23.23% of the vote, due the presence of another right-wing candidate in the race, Sebastián Piñera
Sebastián Piñera
Miguel Juan Sebastián Piñera Echenique is a Chilean businessman and politician. He was elected President of Chile in January 2010, taking office in March 2010.- Education :...
, who made it to the runoff election with 25.41% of the vote.

Lavín is a devout Roman Catholic and also a supernumerary
Supernumerary
A Supernumerary is an additional member of an organization. A supernumerary is also a non-regular member of a staff, a member of the staff or an employee who works in a public office who is not part of the manpower complement...
member of the Prealature of Opus Dei
Opus Dei
Opus Dei, formally known as The Prelature of the Holy Cross and Opus Dei , is an organization of the Catholic Church that teaches that everyone is called to holiness and that ordinary life is a path to sanctity. The majority of its membership are lay people, with secular priests under the...
.

Lavín was narrowly defeated in his bid for a Senate
Senate of Chile
The Senate of the Republic of Chile is the upper house of Chile's bicameral National Congress, as established in the current Constitution of Chile.-Composition:...
seat in the general election held in December 2009, but on 10 February 2010, President-elect Sebastian Piñera
Sebastián Piñera
Miguel Juan Sebastián Piñera Echenique is a Chilean businessman and politician. He was elected President of Chile in January 2010, taking office in March 2010.- Education :...
named him Secretary of Education.http://www.santiagotimes.cl/index.php?option=com_content&view=article&id=18221:chile-pinera-names-new-cabinet&catid=54:presidential&Itemid=140