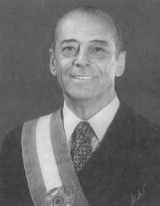 João Baptista de Oliveira Figueiredo was the son of General Euclides de Oliveira Figueiredo, who was exiled after an attempt to topple a dictatorship in 1932. After studying at military schools of Porto Alegre
Porto Alegre
Porto Alegre is the tenth most populous municipality in Brazil, with 1,409,939 inhabitants, and the centre of Brazil's fourth largest metropolitan area . It is also the capital city of the southernmost Brazilian state of Rio Grande do Sul. The city is the southernmost capital city of a Brazilian...
and Realengo, Figueiredo was promoted to captain (1944) and to major (1952). He served in the Brazilian military mission in Paraguay
Paraguay
Paraguay , officially the Republic of Paraguay , is a landlocked country in South America. It is bordered by Argentina to the south and southwest, Brazil to the east and northeast, and Bolivia to the northwest. Paraguay lies on both banks of the Paraguay River, which runs through the center of the...
(1955–1957) and worked for secret service of the Army General Staff (1959–1960). In 1961 he was transferred to the National Security Council. While teaching at the Army General Staff Command College (1961–1964), Figueiredo was promoted to colonel and appointed the department head in the National Information Service. In 1966 he assumed the command of public defense force in São Paulo
São Paulo
São Paulo is the largest city in Brazil, the largest city in the southern hemisphere and South America, and the world's seventh largest city by population. The metropolis is anchor to the São Paulo metropolitan area, ranked as the second-most populous metropolitan area in the Americas and among...
. In 1967–1969 he commanded a regiment in Rio de Janeiro
Rio de Janeiro
Rio de Janeiro , commonly referred to simply as Rio, is the capital city of the State of Rio de Janeiro, the second largest city of Brazil, and the third largest metropolitan area and agglomeration in South America, boasting approximately 6.3 million people within the city proper, making it the 6th...
and was promoted to general. When General Emílio Garrastazú Médici
Emílio Garrastazu Médici
Emílio Garrastazu Médici, was a Brazilian military leader and politician. His rightist rule from 1969 to 1974, marked the apex of military governments in Brazil.-Early life:...
assumed the presidency, Figueiredo was appointed head of the president's military staff (October 30, 1969 – March 15, 1974).

In 1974 he assumed the leadership of the National Information Service (March 15, 1974 – June 14, 1978), a Brazil's internal security agency. Picked by President Ernesto Geisel
Ernesto Geisel
Ernesto Beckmann Geisel, was a Brazilian military leader and politician of German descent who was President of Brazil from 1974 to 1979.-Early life and family:...
as potential successor, Figueiredo defeated opposition candidate, General Monteiro, and continued the gradual "abertura" (democratization) process instituted in 1974. An amnesty law, signed by Figueiredo on 28 August 1979, amnestied those convicted of "political or related" crimes between 1961 and 1978. In the early 1980s, the military regime could not effectively maintain the two-party system established in 1966. The Figueiredo administration dissolved the government-controlled National Renewal Alliance Party (ARENA) and allowed new parties to be formed. In 1981 the Congress enacted a law on restoration of direct elections of state governors. The general election of 1982 brought victory to Arena's successor, pro-government PDS {Democratic Social Party} (43.22% of the vote), and to the opposition PMDB {Brazilian Democratic Movement Party} (42.96%).

The governorship of three major states, São Paulo, Rio de Janeiro and Minas Gerais
Minas Gerais
Minas Gerais is one of the 26 states of Brazil, of which it is the second most populous, the third richest, and the fourth largest in area. Minas Gerais is the Brazilian state with the largest number of Presidents of Brazil, the current one, Dilma Rousseff, being one of them. The capital is the...
, was won by the opposition. However, the political developments were overshadowed by economic problems. As inflation and unemployment soared, the foreign debt reached massive proportions making Brazil the world's biggest debtor owing about US$90 billion to international lenders. The austerity program imposed by the government brought no signs of recovery for the Brazilian economy until the end of Figueiredo's term. The president was often incapacitated by illness and took two prolonged leaves for health treatment in 1981 and 1983, but the civilian vice president Antônio Aureliano Chaves
Aureliano Chaves
Aureliano Chaves was a Brazilian politician.Born in Três Pontas, state of Minas Gerais, he was a Representative of this state in the Chamber of Deputies in 1967 from the ARENA party. He was selected as the governor of Minas Gerais state from 1975 to 1978 and was elected vice-president in 1979...
de Mendonça did not enjoy major political power. The opposition vigorously struggled for passing a constitutional amendment to allow direct popular elections in November 1984, but the proposal failed to win passage in the Congress.