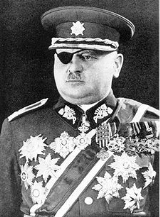 Encyclopedia
Jan Syrový was a Czechoslovak
Czechoslovakia
Czechoslovakia or Czecho-Slovakia was a sovereign state in Central Europe which existed from October 1918, when it declared its independence from the Austro-Hungarian Empire, until 1992...
Army four star general
General
A general officer is an officer of high military rank, usually in the army, and in some nations, the air force. The term is widely used by many nations of the world, and when a country uses a different term, there is an equivalent title given....
and the prime minister
Prime minister
A prime minister is the most senior minister of cabinet in the executive branch of government in a parliamentary system. In many systems, the prime minister selects and may dismiss other members of the cabinet, and allocates posts to members within the government. In most systems, the prime...
during the Munich Crisis.

Jan Syrový studied building at a technical school. Following his graduation in 1906, he became a one year volunteer in the Austro-Hungarian army
Austro-Hungarian Army
The Austro-Hungarian Army was the ground force of the Austro-Hungarian Dual Monarchy from 1867 to 1918. It was composed of three parts: the joint army , the Austrian Landwehr , and the Hungarian Honvédség .In the wake of fighting between the...
. After that, he studied at a technical college in Russia
Russia
Russia or , officially known as both Russia and the Russian Federation , is a country in northern Eurasia. It is a federal semi-presidential republic, comprising 83 federal subjects...
. During World War I
World War I
World War I , which was predominantly called the World War or the Great War from its occurrence until 1939, and the First World War or World War I thereafter, was a major war centred in Europe that began on 28 July 1914 and lasted until 11 November 1918...
, he fought in the Czechoslovak Legion of the Russian army and lost his right eye in the Battle of Zborov
Battle of Zborov (1917)
Battle of Zborov was a small part of the Kerensky Offensive...
. Later he commanded the Legion and anti-Bolshevik
Bolshevik
The Bolsheviks, originally also Bolshevists , derived from bol'shinstvo, "majority") were a faction of the Marxist Russian Social Democratic Labour Party which split apart from the Menshevik faction at the Second Party Congress in 1903....
forces on the Trans-Siberian railway
Trans-Siberian Railway
The Trans-Siberian Railway is a network of railways connecting Moscow with the Russian Far East and the Sea of Japan. It is the longest railway in the world...
. A well-known veteran commander, he served as Chief of Staff of the Czechoslovak Army from 1927 to 1933 and as is general inspector from 1933 to 1938. During this time, helped to prepare the Czechoslovak Air Force with the collaboration of Jan Antonín Baťa
Jan Antonín Bata
Jan Antonín Baťa was a Czech shoe manufacturer from Uherské Hradiště , brother of Tomáš Baťa....
and moved military personnel and materials away from Nazi Germany.


Premiership and the "Munich Crisis"

When Milan Hodža
Milan Hodža
Milan Hodža was a prominent Slovak politician and journalist, serving from 1935 to 1938 as the Prime Minister of Czechoslovakia and in December 1935 as the acting President of Czechoslovakia...
's government resigned on September 23, 1938, Syrový was appointed Prime Minister and Minister of National Defence despite his objections. Syrový had insisted he was just a soldier, not a politician, and that he lacked the qualifications and relevant experience to qualify him for such an important post. President Edvard Beneš
Edvard Beneš
Edvard Beneš was a leader of the Czechoslovak independence movement, Minister of Foreign Affairs and the second President of Czechoslovakia. He was known to be a skilled diplomat.- Youth :...
told him that the nation needed him and that, as a soldier, he should regard it as an order. With some reluctance, Syrový then accepted.

As Prime Minister, he was forced to accept the terms of the Munich Agreement
Munich Agreement
The Munich Pact was an agreement permitting the Nazi German annexation of Czechoslovakia's Sudetenland. The Sudetenland were areas along Czech borders, mainly inhabited by ethnic Germans. The agreement was negotiated at a conference held in Munich, Germany, among the major powers of Europe without...
on September 30. In a speech to the nation, he stated Czechoslovakia had no choice but to accept the terms because without British or French support, was outnumbered and any conflict would result in severe casualties. "We were abandoned," he said. "We stand alone." Following the resignation of the President Edvard Beneš
Edvard Beneš
Edvard Beneš was a leader of the Czechoslovak independence movement, Minister of Foreign Affairs and the second President of Czechoslovakia. He was known to be a skilled diplomat.- Youth :...
on October 5, Syrový temporarily took over some presidential duties (in accord with the Czechoslovak Constitution
Czechoslovak Constitution of 1920
After World War I, Czechoslovakia established itself and as a republic and democracy with the establishment of the Constitution of 1920. The constitution was adopted by the National Assembly on 29 February 1920 and replaced the provisional constitution adopted on 13 November 1918.The introduction...
) until Emil Hácha
Emil Hácha
Emil Hácha was a Czech lawyer, the third President of Czecho-Slovakia from 1938 to 1939. From March 1939, he presided under the German Protectorate of Bohemia and Moravia.-Judicial career:...
was duly elected President on November 30, 1938.

He resigned the premiership on December 1, 1938, remaining as Minister of National Defence until April 27, 1939. He did not join the anti-German resistance as he was too well-known a figure for his involvement to be anything other than a liability. However, he did arrange the transfer of substantial sums from a Legionary relief fund to assist the resistance and people facing persecution.

On May 14, 1945, in the immediate aftermath of the war, Syrový was arrested, charged with collaboration
Collaboration
Collaboration is working together to achieve a goal. It is a recursive process where two or more people or organizations work together to realize shared goals, — for example, an intriguing endeavor that is creative in nature—by sharing...
(although he had consciously steered clear of this, as far as his office allowed). In a show-trial
Show trial
The term show trial is a pejorative description of a type of highly public trial in which there is a strong connotation that the judicial authorities have already determined the guilt of the defendant. The actual trial has as its only goal to present the accusation and the verdict to the public as...
of alleged collaborators in 1947, the National Court found him guilty (along with Rudolf Beran
Rudolf Beran
Rudolf Beran was a Czechoslovakian politician who served as prime minister of the country before its occupation by Nazi Germany and shortly thereafter, before it was declared a protectorate...
) and sentenced him to twenty years imprisonment in severe conditions.

Released in 1960 by Novotný
Antonín Novotný
Antonín Novotný was General Secretary of the Communist Party of Czechoslovakia from 1953 to 1968, and also held the post of President of Czechoslovakia from 1957 to 1968. He was born in Letňany, now part of Prague....
's amnesty, Syrový was left with no pension or any means of maintenance. Additionally, the communist regime barred him from employment. Eventually he was allowed to work as a night watchman, ironically guarding Marold
Ludek Marold
Luděk Marold was a Czech realist painter. He lived in Prague, Paris and Munich....
's panorama of the Battle of Lipany
Battle of Lipany
The Battle of Lipany or Lipan, also called the Battle of Česky Brod, was fought at Lipany 40 km east of Prague on 30 May 1434 and virtually ended the Hussite Wars...
. Not until late 1967 did the regime grant him a limited retirement pension.

Syrový was deeply wounded by the verdict of the National Court and remained so for the rest of his life. His own conscience was clear and he never came to terms with the apparent injustice of the decision. He reviewed his trial in an interview for the Report Magazine in 1968 and stated that there were three critical pieces of evidence laid against him. Firstly, a snapshot of himself shaking hands with Hitler
Adolf Hitler
Adolf Hitler was an Austrian-born German politician and the leader of the National Socialist German Workers Party , commonly referred to as the Nazi Party). He was Chancellor of Germany from 1933 to 1945, and head of state from 1934 to 1945...
, during a meeting he was obliged to attend at the Prague Castle
Prague Castle
Prague Castle is a castle in Prague where the Kings of Bohemia, Holy Roman Emperors and presidents of Czechoslovakia and the Czech Republic have had their offices. The Czech Crown Jewels are kept here...
. Hitler had made a speech of reassurance as to Czechoslovakia's future under the 'protection' of the Reich; he then held out his hand to Syrový and the photographers immediately took a picture. Another photo provided the second piece of evidence: this photograph was taken at a government banquet and showed Syrový sat alongside Henlein
Konrad Henlein
Konrad Ernst Eduard Henlein was a leading pro-Nazi ethnic German politician in Czechoslovakia and leader of Sudeten German separatists...
. Syrový stated that the picture was taken out of context, to be used for Nazi
Nazism
Nazism, the common short form name of National Socialism was the ideology and practice of the Nazi Party and of Nazi Germany...
propaganda. The final piece of critical evidence was an arms contract with the Nazis. Syrový stated the weapons sold had been obsolete items from the First World War, which were no longer of any use to Czechoslovakia and that the weapons had been sold to German private companies; in addition, he stated that, ultimately, the decision to sell was made not just by him, but by the government as a whole. Syrový felt that had the allies of Czechoslovakia offered their promised help, he would never have had to agree to the Munich Dictate, but that, under the circumstances, the Czechoslovak Army on its own had no chance of success.