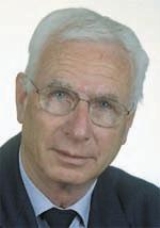 Schlaich was made a partner and was responsible for the Olympic Stadium, Munich. He stayed with the firm until 1969.

In 1993, with the roof of the Gottlieb-Daimler-Stadion
Gottlieb-Daimler-Stadion
The Mercedes-Benz Arena is a stadium located in Stuttgart, Baden-Württemberg, Germany and home to German Bundesliga club VfB Stuttgart.Before 1993 it was called Neckarstadion, named after the nearby river Neckar and between 1993 and July 2008 it was called Gottlieb-Daimler-Stadion...
(since 2008 Mercedes-Benz-Arena) in Stuttgart
Stuttgart
Stuttgart is the capital of the state of Baden-Württemberg in southern Germany. The sixth-largest city in Germany, Stuttgart has a population of 600,038 while the metropolitan area has a population of 5.3 million ....
, he introduced the "speichenrad" principle to structural engineering
Structural engineering
Structural engineering is a field of engineering dealing with the analysis and design of structures that support or resist loads. Structural engineering is usually considered a specialty within civil engineering, but it can also be studied in its own right....
. Indeed, this principle was employed the first time in the history of Structural Engineering by the Italian engineer Massimo Majowiecki, the designer of the roof of the Olympic Stadium, Rome (built in 1990, three years before the Gottlieb-Daimler-Stadion). Since then, his company successfully employed it to stadium projects across the globe. Other structures include the observation tower at the Killesbergpark
Killesbergpark
The Killesbergpark is an urban public park of half a square kilometre in Stuttgart, Germany. It is just north of the state capital, and borders the city's fairgrounds. The park dates back to the horticultural show of 1939. Before the show, a large area of the park had been a quarry...
in Stuttgart. Most of his work as well of that of his company is documented on their website. He is also the developer of the solar tower
Solar updraft tower
The solar updraft tower is a renewable-energy power plant. It combines the chimney effect, the greenhouse effect and the wind turbine. Air is heated by sunshine and contained in a very large greenhouse-like structure around the base of a tall chimney, and the resulting convection causes air to...
(or solar chimney) and is largely credited with inventing the strut and tie model for reinforced concrete
Reinforced concrete
Reinforced concrete is concrete in which reinforcement bars , reinforcement grids, plates or fibers have been incorporated to strengthen the concrete in tension. It was invented by French gardener Joseph Monier in 1849 and patented in 1867. The term Ferro Concrete refers only to concrete that is...
.