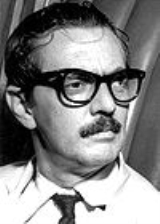 Encyclopedia
Jânio da Silva Quadros (ˈʒɐniu da ˈsiwva ˈkwadɾus), (January 25, 1917 — February 16, 1992), was a Brazilian politician
Politics of Brazil
The politics of Brazil take place in a framework of a federal presidential representative democratic republic, where by the President is both head of state and head of government, and of a multi-party system...
who served as President of Brazil
President of Brazil
The president of Brazil is both the head of state and head of government of the Federative Republic of Brazil. The president leads the executive branch of the federal government and is the commander-in-chief of the Brazilian Armed Forces...
for only 7 months in 1961.

Quadros was born in Campo Grande
Campo Grande
-Climate:Campo Grande has a highland tropical climate, semi-humid, hot, and notably seasonal, with a dry winter season from May through September or October. Under the Koppen climate classification Campo Grande features a tropical wet and dry climate, albeit a noticeably cooler version of the...
, Mato Grosso do Sul
Mato Grosso do Sul
Mato Grosso do Sul is one of the states of Brazil.Neighboring Brazilian states are Mato Grosso, Goiás, Minas Gerais, São Paulo and Paraná. It also borders the countries of Paraguay and Bolivia to the west. The economy of the state is largely based on agriculture and cattle-raising...
. His meteoric career can be attributed to his widespread use of populist rhetoric and his extravagant behavior. He became mayor
Mayor
In many countries, a Mayor is the highest ranking officer in the municipal government of a town or a large urban city....
of the city of São Paulo in 1953 and governor
Governor
A governor is a governing official, usually the executive of a non-sovereign level of government, ranking under the head of state...
of the state of São Paulo
São Paulo (state)
São Paulo is a state in Brazil. It is the major industrial and economic powerhouse of the Brazilian economy. Named after Saint Paul, São Paulo has the largest population, industrial complex, and economic production in the country. It is the richest state in Brazil...
just two years later, in 1955. He was elected president of Brazil by a landslide in 1960, running as the candidate of the center-right National Democratic Union. When he took office on January 31, 1961; it was the first time since Brazil became a republic in 1889 that an incumbent government peacefully transferred power to an elected member of the opposition. It was also the first time in 31 years that the presidency was not held by an heir to the legacy of Getulio Vargas
Getúlio Vargas
Getúlio Dornelles Vargas served as President of Brazil, first as dictator, from 1930 to 1945, and in a democratically elected term from 1951 until his suicide in 1954. Vargas led Brazil for 18 years, the most for any President, and second in Brazilian history to Emperor Pedro II...
.

Quadros laid the blame for the country's high rate of inflation
Inflation
In economics, inflation is a rise in the general level of prices of goods and services in an economy over a period of time.When the general price level rises, each unit of currency buys fewer goods and services. Consequently, inflation also reflects an erosion in the purchasing power of money – a...
on his predecessor, Juscelino Kubitschek. As president, Quadros outlawed gambling
Gambling
Gambling is the wagering of money or something of material value on an event with an uncertain outcome with the primary intent of winning additional money and/or material goods...
, banned women from wearing bikini
Bikini
The bikini is typically a women's two-piece swimsuit. One part of the attire covers the breasts and the other part covers the crotch and part of or the entire buttocks, leaving an uncovered area between the two. Merriam–Webster describes the bikini as "a woman's scanty two-piece bathing suit" or "a...
s on the beach, and established relations with the Soviet Union
Soviet Union
The Soviet Union , officially the Union of Soviet Socialist Republics , was a constitutionally socialist state that existed in Eurasia between 1922 and 1991....
and Cuba
Cuba
The Republic of Cuba is an island nation in the Caribbean. The nation of Cuba consists of the main island of Cuba, the Isla de la Juventud, and several archipelagos. Havana is the largest city in Cuba and the country's capital. Santiago de Cuba is the second largest city...
, trying to achieve a neutralist international policy. The re-establishment of relations with the Socialist Bloc in the middle of the Cold War
Cold War
The Cold War was the continuing state from roughly 1946 to 1991 of political conflict, military tension, proxy wars, and economic competition between the Communist World—primarily the Soviet Union and its satellite states and allies—and the powers of the Western world, primarily the United States...
cost him the support of the UDN in Congress, so that he was left with no real power.

He resigned on August 25, 1961, expecting to return to the presidency by acclamation of the Brazilian people or by request of the National Congress of Brazil and the military, which, concerned about the possibility of the leftist vice president João Goulart
João Goulart
João Belchior Marques Goulart was a Brazilian politician and the 24th President of Brazil until a military coup d'état deposed him on April 1, 1964. He is considered to have been the last left-wing President of the country until Luiz Inácio Lula da Silva took office in 2003.-Name:João Goulart is...
taking the oath as president, would refuse Quadros' resignation. This maneuver, however, was immediately rejected by the Brazilian legislature
National Congress of Brazil
The National Congress of Brazil is the legislative body of Brazil's federal government.Unlike regional legislative bodies – Legislative Assemblies and City Councils -, the Congress is bicameral, composed of the Federal Senate and the Chamber of Deputies .The Senate represents the 26 states and...
, which accepted his resignation and called on the president of the Congress, Pascoal Ranieri Mazzilli
Pascoal Ranieri Mazzilli
Pascoal Ranieri Mazzilli, LS was a Brazilian politician who was President of Brazil in 1961 and 1964. Mazzilli's father was Domingo Mazzilli , an Italian from Montemurro, Basilicata, who immigrated to Brazil in 1892, at the age of 15. The mother, Angela Luizzi, was also from Montemurro and...
, to assume office until the vice president came back from his trip to Communist China. Goulart finally took the oath as president on September 7, 1961, although his power was restricted by an amendment to the Constitution passed on September 2, that created a parliamentary system of Government. He was not of the same party as Quadros; at the time, Brazilians could vote for a ticket that had candidates for president and vice president from different parties.

Quadros's resignation initiated a serious political crisis that culminated in a military coup in 1964. While the military did not allow him to participate in politics, by the 1980s Quadros had made a comeback. He joined the Partido Trabalhista Brasileiro
Brazilian Labour Party (current)
The Brazilian Labour Party is a center-right political party in Brazil founded in 1981 by Ivete Vargas, niece of President Getúlio Vargas. It claims the legacy of the historical PTB, although many historians reject this because the early version of PTB was a center-left party with wide support in...
, and was candidate for governor of São Paulo in 1982, only to be defeated by André Franco Montoro
André Franco Montoro
André Franco Montoro was a Brazilian politician and lawyer. He was born in São Paulo as the son of André de Blois Montoro and Tomásia Alijostes. He was a senator and governor of São Paulo. He was a member of several parties, such as PDC, MDB, Party of Brazilian Democratic Movement and one of the...
. Nevertheless, he was re-elected mayor of São Paulo in 1985, defeating the favored candidate, Fernando Henrique Cardoso
Fernando Henrique Cardoso
Fernando Henrique Cardoso – also known by his initials FHC – was the 34th President of the Federative Republic of Brazil for two terms from January 1, 1995 to December 31, 2002. He is an accomplished sociologist, professor and politician...
, later president of Brazil. Quadros served as mayor until 1988 and died in São Paulo in 1992.