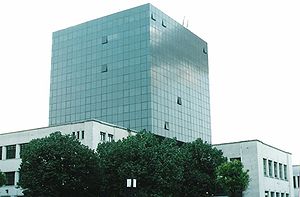 Instituto Superior Técnico (IST) is a reputed school of engineering
Engineering
Engineering is the discipline, art, skill and profession of acquiring and applying scientific, mathematical, economic, social, and practical knowledge, in order to design and build structures, machines, devices, systems, materials and processes that safely realize improvements to the lives of...
, part of Universidade Técnica de Lisboa (Technical University of Lisbon). IST is the largest and the most prestigious school of engineering in Portugal
Portugal
Portugal , officially the Portuguese Republic is a country situated in southwestern Europe on the Iberian Peninsula. Portugal is the westernmost country of Europe, and is bordered by the Atlantic Ocean to the West and South and by Spain to the North and East. The Atlantic archipelagos of the...
. It is a public school with large scientific and financial autonomy, founded in 1911.

IST, since its foundation, has been the largest school of engineering, science and technology in Portugal, at undergraduate and postgraduate levels. It develops strong research and development activities in accordance with the highest international standards.
It has two campi, both located in the Greater Lisbon area (Alameda in Lisbon
Lisbon
Lisbon is the capital city and largest city of Portugal with a population of 545,245 within its administrative limits on a land area of . The urban area of Lisbon extends beyond the administrative city limits with a population of 3 million on an area of , making it the 9th most populous urban...
and Taguspark
Taguspark
Taguspark is a science and technology park located in the municipality of Oeiras, Greater Lisbon subregion, Portugal. In an area of approximately 3.6 km², 2 km² of which are occupied by the Park, there are several research and development labs, innovative startups and business incubators in a range...
in Oeiras), and consists of ten Departments and one Autonomous Section that are responsible for teaching the undergraduate and postgraduate programmes. Each Department is organised in sections, which group together specific subjects within its scientific area. In addition, the laboratories of the several Departments are an important source of support to the teaching and research activities carried out at IST.

Today, IST offers 21 undergraduate programmes attended by more than 5,800 students, covering a wide range of areas of knowledge, including not only all the traditional engineering specializations, but also other modern areas such as Biomedical Engineering, Aerospace and Physics Engineering.

IST benefits from an IBM
IBM
International Business Machines Corporation or IBM is an American multinational technology and consulting corporation headquartered in Armonk, New York, United States. IBM manufactures and sells computer hardware and software, and it offers infrastructure, hosting and consulting services in areas...
supercomputer
Supercomputer
A supercomputer is a computer at the frontline of current processing capacity, particularly speed of calculation.Supercomputers are used for highly calculation-intensive tasks such as problems including quantum physics, weather forecasting, climate research, molecular modeling A supercomputer is a...
built in 2007, which is one of the most powerful in Portugal (1.6 TFLOPS as of 2007).

Instituto Superior Técnico (IST) was created in 1911 from the division of the Industrial and Commercial Institute of Lisbon. Alfredo Bensaúde, an engineer, was IST's first dean (1911–1922) and promoted a wide-rang reform in the Portuguese higher technical education, including the first engineering courses at IST: mining, civil, mechanical, electrical, and chemical-industrial. IST's second dean was Duarte Pacheco (1927–1932), also an engineer, who was responsible for the construction of the university campus at Alameda. The architect Porfírio Pardal Monteiro designed it. Meanwhile IST became part of the recently created Technical University of Lisbon
Technical University of Lisbon
The Technical University of Lisbon is a Portuguese public university. It was created in 1930 in Lisbon, as a confederation of older schools, and comprises, nowadays, the faculties and institutes of veterinary medicine; agricultural sciences; economics and business administration; engineering,...
. Throughout the following decade, the image of engineers from IST was projected into major engineering works, promoted by Duarte Pacheco, who was by the time Minister of Public Works.

Between 1952 and 1972, 12 study centres were established in Portugal, three of them at IST, in the fields of chemistry, geology and mineralogy, and electronics. These centres were responsible for promoting faculty training and scientific qualification through doctoral studies in universities and research centres abroad. In 1970, the minimum period for obtaining a bachelor degree decreased from six to five years, and IST denoted a remarkable increase of the number of students. During this period, scientific research at IST increased significantly, through the creation of the Complexo Interdisciplinar which fasten together various autonomous research units, and contributes to transform IST in a reference school at European level.

In the 1990s, new courses were created in cutting-edge engineering areas, including master and doctoral programmes. In 2001, IST inaugurated a new campus in Oeiras
Oeiras
Oeiras is a town and a municipality in western Lisbon Metropolitan Area, Portugal. It is in conurbation with Lisbon, the parish population is 34,850, and the entire Oeiras Municipality has 168,475 inhabitants. The town of Oeiras is one of the most populous towns in Portugal...
, located in a science and technology park, the TagusPark
Taguspark
Taguspark is a science and technology park located in the municipality of Oeiras, Greater Lisbon subregion, Portugal. In an area of approximately 3.6 km², 2 km² of which are occupied by the Park, there are several research and development labs, innovative startups and business incubators in a range...
, which involves more than 120 technology-based companies. In the academic year of 2006-2007, the Declaration of Bologna was successfully implemented for all IST programmes, aiming the establishment of a European Education Area to make Europe a competitive knowledge-based economy.

Today's IST is generally recognised as Portugal's leading engineering school. IST is involved with some of Portugal's most prestigious R&D&I and technology transfer institutions. A vast number of courses in cutting-edge engineering areas, at undergraduate, master and doctoral levels, are nowadays offered at IST. IST is also actively involved in several networks and international programmes to promote student mobility, both at undergraduate and postgraduate levels. Through a large number of agreements with other institutions worldwide, IST participates in more than 20 Dual Master programmes, and joint PhD programmes with MIT, CMU
CMU
CMU may stand for a university:*Carnegie Mellon University in Pittsburgh, Pennsylvania, United States*Central Michigan University in Mount Pleasant, Michigan, United States*Canadian Mennonite University in Winnipeg, Manitoba, Canada...
, UT-Austin and EPFL.