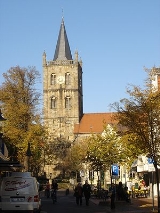 Encyclopedia
Ibbenbüren or Ibbenbueren is a medium-sized town in the district of Steinfurt
Steinfurt (district)
Steinfurt is a Kreis in the northern part of North Rhine-Westphalia, Germany. Neighboring districts are Bentheim, Emsland, district-free Osnabrück and the Osnabrück district, Warendorf, district-free Münster, Coesfeld, Borken.-Geography:...
, in North Rhine-Westphalia
North Rhine-Westphalia
North Rhine-Westphalia is the most populous state of Germany, with four of the country's ten largest cities. The state was formed in 1946 as a merger of the northern Rhineland and Westphalia, both formerly part of Prussia. Its capital is Düsseldorf. The state is currently run by a coalition of the...
, Germany
Germany
Germany , officially the Federal Republic of Germany , is a federal parliamentary republic in Europe. The country consists of 16 states while the capital and largest city is Berlin. Germany covers an area of 357,021 km2 and has a largely temperate seasonal climate...
. It is on position 185 of the largest cities in Germany and the largest city in Tecklenburger Land.

Ibbenbüren (Ibbenbueren) is situated on the Ibbenbürener Aa river, at the northwest end of the Teutoburger forest and rather exactly in the center of the two cities Rheine
Rheine
Rheine is a city in the district of Steinfurt in Westphalia, Germany. It is the largest city in the district and the location of Rheine Air Base.-Geography:Rheine is located on the river Ems, approx. north of Münster, approx...
in the west and Osnabrück
Osnabrück
Osnabrück is a city in Lower Saxony, Germany, some 80 km NNE of Dortmund, 45 km NE of Münster, and some 100 km due west of Hanover. It lies in a valley penned between the Wiehen Hills and the northern tip of the Teutoburg Forest...
in the east, both approximately 20 km away.

Ibbenbüren is mentioned in documentary evidence for the first time in 1146, when the bishop of Osnabrück
Prince-Bishopric of Osnabrück
The Prince-Bishopric of Osnabrück was a prince-bishopric centred on the Roman Catholic Diocese of Osnabrück. The diocese was erected in 772 and is the oldest see founded by Charlemagne, in order to Christianize the conquered stem-duchy of Saxony....
at that time, Philipp of Katzenelnbogen, donated a tenth of his possessions in Ibbenbüren to the Getrudenkloster of Osnabrück. Although Ibbenbüren is already much older and a document of the year 1348 already occupies the establishment of a church in the year 799, the year 1146 is officially considered as the year of the foundation of Ibbenbüren.

After the noble gentleman of Ibbenbüren died out, Ibbenbüren came under the exclusive rule of the counts of Tecklenburg
Tecklenburg
Tecklenburg is a town in the district of Steinfurt, in North Rhine-Westphalia, Germany.-Geography:It is located at the foothills of the Teutoburg Forest, southwest of Osnabrück.-Division of the town:...
. This rule lasted until the end of the 15th or beginning of the 16th century, when Ibbenbüren finally fell into possession Charles' V.
Charles V, Holy Roman Emperor
Charles V was ruler of the Holy Roman Empire from 1519 and, as Charles I, of the Spanish Empire from 1516 until his voluntary retirement and abdication in favor of his younger brother Ferdinand I and his son Philip II in 1556.As...
in 1548 by awkward and luckless tactics used by the counts of Tecklenburg. Karl donated it to his sister Mary of Habsburg, governor of the Netherlands. Ibbenbüren was assigned to the office Lingen
Lingen
Lingen is a town in Lower Saxony, Germany. In 2008 the population was 52,353, and in addition there are about 5,000 people who have registered the city as their secondary residence...
. Into this period also the falls the beginning of coal mining.

After Ibbenbüren repeatedly fell under control of the Netherlands and Spain in the Dutch Revolt
Dutch Revolt
The Dutch Revolt or the Revolt of the Netherlands This article adopts 1568 as the starting date of the war, as this was the year of the first battles between armies. However, since there is a long period of Protestant vs...
, it was assigned to the House of Orange-Nassau
House of Orange-Nassau
The House of Orange-Nassau , a branch of the European House of Nassau, has played a central role in the political life of the Netherlands — and at times in Europe — since William I of Orange organized the Dutch revolt against Spanish rule, which after the Eighty Years' War...
after the Peace of Westphalia
Peace of Westphalia
The Peace of Westphalia was a series of peace treaties signed between May and October of 1648 in Osnabrück and Münster. These treaties ended the Thirty Years' War in the Holy Roman Empire, and the Eighty Years' War between Spain and the Dutch Republic, with Spain formally recognizing the...
in 1648. In this time falls the beginning of iron ore mining in and around Ibbenbüren, which ended in the first half of the 19th century. By succession it came under Prussia
Prussia
Prussia was a German kingdom and historic state originating out of the Duchy of Prussia and the Margraviate of Brandenburg. For centuries, the House of Hohenzollern ruled Prussia, successfully expanding its size by way of an unusually well-organized and effective army. Prussia shaped the history...
n rule in 1702. On February 1, 1724 Ibbenbüren attained municipal rights, which stood among other things in connection with the introduction excise duty. In the year 1743 the first magistrate and mayor appointed.

During the rule of Napoléon Bonaparte
Napoleon I of France
Napoleon Bonaparte was a French military and political leader during the latter stages of the French Revolution.As Napoleon I, he was Emperor of the French from 1804 to 1815...
at the beginning of the 19th century, Ibbenbüren belonged to the first French Empire
First French Empire
The First French Empire , also known as the Greater French Empire or Napoleonic Empire, was the empire of Napoleon I of France...
, until it was freed by Prussian and Russia
Russia
Russia or , officially known as both Russia and the Russian Federation , is a country in northern Eurasia. It is a federal semi-presidential republic, comprising 83 federal subjects...
n troops in 1815. It came back under Prussian rule on January 1, 1816, resulting to be assigned to the district of Tecklenburg. After the end of World War II
World War II
World War II, or the Second World War , was a global conflict lasting from 1939 to 1945, involving most of the world's nations—including all of the great powers—eventually forming two opposing military alliances: the Allies and the Axis...
the city Ibbenbüren and the municipality Ibbenbüren Land formed by December 31, 1974 the department federation Ibbenbüren, resulting in today's city of Ibbenbüren. With the simultaneous dissolution of the district of Tecklenburg and fusion with the old district of Burgsteinfurt, Ibbenbüren was assigned to the new district of Steinfurt
Steinfurt (district)
Steinfurt is a Kreis in the northern part of North Rhine-Westphalia, Germany. Neighboring districts are Bentheim, Emsland, district-free Osnabrück and the Osnabrück district, Warendorf, district-free Münster, Coesfeld, Borken.-Geography:...
.

Coats of arms shows a golden anchor
Anchor
An anchor is a device, normally made of metal, that is used to connect a vessel to the bed of a body of water to prevent the vessel from drifting due to wind or current. The word derives from Latin ancora, which itself comes from the Greek ἄγκυρα .Anchors can either be temporary or permanent...
on blue reason. City colors are blue
Blue
Blue is a colour, the perception of which is evoked by light having a spectrum dominated by energy with a wavelength of roughly 440–490 nm. It is considered one of the additive primary colours. On the HSV Colour Wheel, the complement of blue is yellow; that is, a colour corresponding to an equal...
and gold
Gold
Gold is a chemical element with the symbol Au and an atomic number of 79. Gold is a dense, soft, shiny, malleable and ductile metal. Pure gold has a bright yellow color and luster traditionally considered attractive, which it maintains without oxidizing in air or water. Chemically, gold is a...
. The origin of the anchor is not free of doubts clarified yet. Such is in addition, in the coats of arms of some neighboring places.