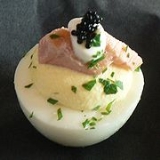 Encyclopedia
Hors d'oeuvre also known as appetizers, starters, or the first course, are food
Food
Food is any substance consumed to provide nutritional support for the body. It is usually of plant or animal origin, and contains essential nutrients, such as carbohydrates, fats, proteins, vitamins, or minerals...
items served before the main courses of a meal
Meal
A meal is an instance of eating, specifically one that takes place at a specific time and includes specific, prepared food.Meals occur primarily at homes, restaurants, and cafeterias, but may occur anywhere. Regular meals occur on a daily basis, typically several times a day...
. The French (singular and plural) is hors d'œuvre; in English, the œ ligature is usually replaced by the digraph "oe" with the plural often written as "hors d'oeuvres" and pronounced ɔr.
There are several related terms, such as a one-bite appetizer, as an amuse-bouche (or other terms below, under: See also). 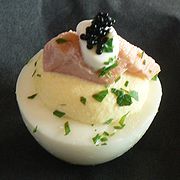 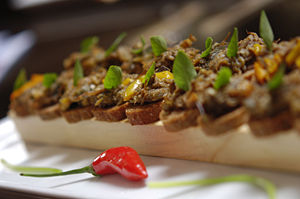 If there is an extended period between when guests arrive and when the meal is served (for example during a cocktail
Cocktail
A cocktail is an alcoholic mixed drink that contains two or more ingredients—at least one of the ingredients must be a spirit.Cocktails were originally a mixture of spirits, sugar, water, and bitters. The word has come to mean almost any mixed drink that contains alcohol...
hour), these might also serve the purpose of sustaining guests during the wait, in the same way that aperitifs are served as a drink before meals. Hors d'oeuvre are sometimes served with no meal afterward. This is the case with many reception
Party
A party is a gathering of people who have been invited by a host for the purposes of socializing, conversation, or recreation. A party will typically feature food and beverages, and often music and dancing as well....
and cocktail party
Cocktail party
A cocktail party is a party where cocktails are served. Women may choose to wear what has become known as a cocktail dress.Although many believe the inventor of the cocktail party to be Alec Waugh of London, who in 1924 found a need for this pleasant interlude before a dinner party, an article in...
events.

Though any food served prior to the main course is technically an hors d'oeuvre, the phrase is generally limited to individual items, not crudités
Crudités
Crudités are traditional French appetizers comprising sliced or whole raw vegetables which are sometimes dipped in a vinaigrette or another dipping sauce...
, cheese or fruit. For example, a glazed fig topped with mascarpone
Mascarpone
Mascarpone |denaturation]], whey is removed without pressing or aging. One can manufacture mascarpone by using cream and tartaric acid, citric acid, or even lemon juice....
and wrapped with prosciutto
Prosciutto
Prosciutto |ham]]) or Parma ham is a dry-cured ham that is usually thinly sliced and served uncooked; this style is called prosciutto crudo in Italian and is distinguished from cooked ham, prosciutto cotto....
is considered an "hors d'oeuvre," whereas figs on a platter are not.

A more substantial starter or first course served at the table might be referred to as an entrée
Entrée
An entrée is a dish served before the main course, or between two principal courses of a meal.The disappearance in the early 20th century of a large communal main course such as a roast as a standard part of the meal in the English-speaking world has led to the term being used to describe the main...
(outside the U.S. and English Canada).

Examples of Hors d'oeuvre include:


Other languages and cultures