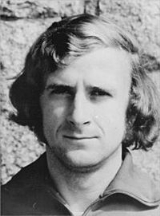 Encyclopedia
Hans-Jürgen Kreische is a former East German footballer. Kreische spent his entire career with his hometown club, Dynamo Dresden
Dynamo Dresden
SG Dynamo Dresden are a German association football club, based in Dresden, Saxony. They were founded in 1950, as a club affiliated with the East German police, and became one of the most popular and successful clubs in East German football, winning eight league titles...
, scoring 127 goals in 234 DDR-Oberliga
DDR-Oberliga
The DDR-Oberliga was, prior to German reunification in 1990, the elite level of football competition in the DDR , being roughly equivalent to the Oberliga or Bundesliga in West Germany.-Overview:Following World...
games between 1964 and 1978. He was East Germany's top scorer in 1971, 1972, 1973 and 1976, and was player of the year
German Footballer of the Year
The title Footballer of the Year has been awarded in Germany since 1960. In 1996 the title Women's Footballer of the Year was awarded for the first time. Both awards are determined by a poll of German football journalists from the Association of German Sports Journalists and the publication Kicker...
in 1973.

Kreische was an East German
East Germany national football team
The East Germany national football team was from 1952 to 1990 the football team of East Germany, playing as one of three post-war German teams, along with Saarland and West Germany....
international, scoring 25 goals in 50 appearances. He was part of the 1974 World Cup squad, and was also in the 1972 Olympic
Football at the 1972 Summer Olympics
Final results for the Football competition at the 1972 Summer Olympics held in Munich, Augsburg, Ingolstadt, Nürnberg, Passau, and Regensburg.-Medalists:-Group A: ---- -----------------Group B: ---- ----------------...
bronze medal winning team. Following his retirement from football, Kreische worked as a coach with Dynamo's youth system and had a brief spell as first-team manager, during the 1995-96 season.