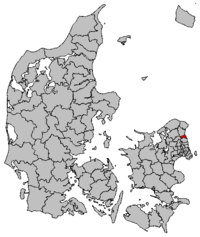 Hørsholm Kommune is a municipality (Danish
Danish language
Danish is a North Germanic language spoken by around six million people, principally in the country of Denmark. It is also spoken by 50,000 Germans of Danish ethnicity in the northern parts of Schleswig-Holstein, Germany, where it holds the status of minority language...
, kommune) in the Copenhagen Capital Region in the northern part of the island of Zealand (Sjælland) in eastern Denmark
Denmark
Denmark is a Scandinavian country in Northern Europe. The countries of Denmark and Greenland, as well as the Faroe Islands, constitute the Kingdom of Denmark . It is the southernmost of the Nordic countries, southwest of Sweden and south of Norway, and bordered to the south by Germany. Denmark...
. The municipality covers an area of 31 km², and has a total population of 24,197 (2008). Its mayor as of 2010 is Morten Slotved, a member of the Conservative People's Party
Conservative People's Party (Denmark)
The Conservative People's Party , also known as Conservatives is a Danish political party.-History:The party was founded 1915 based mostly on its predecessor, Højre , but also on the Free Conservatives and a moderate faction of Venstre , the liberals.The party has participated in several coalition...
(Det Konservative Folkeparti) political party
Politics of Denmark
The Politics of Denmark takes place in a framework of a parliamentary, representative democratic, constitutional monarchy, in which the Prime Minister is the head of government, and of a multi-party system...
.

The main town and the site of its municipal council is the town of Hørsholm.

Neighboring municipalities, in line with the Kommunalreformen ("The Municipal Reform" of 2007), are Fredensborg municipality
Fredensborg municipality
Fredensborg Kommune is a municipality in Region Hovedstaden . The municipality covers an area of 112 km2, and has a total population of 39,240...
(formerly Fredensborg-Humlebæk and Karlebo) to the north, Allerød municipality
Allerød municipality
Allerød Kommune is a municipality on the island of Zealand in eastern Denmark. The municipality covers an area of 67 km², and has a total population of 23,493...
to the west, and Rudersdal municipality
Rudersdal municipality
Rudersdal Kommune is a municipality in Region Hovedstaden in Denmark. It is situated approximately 20 kilometers north of Copenhagen...
(formerly Birkerød and Søllerød) to the south. To the east is the Øresund
Oresund
The Sound , is the strait that separates the Danish island Zealand from the southern Swedish province of Scania. Its width is just at the narrowest point between Helsingør, Denmark, and Helsingborg, Sweden...
, the strait that separates Denmark from Sweden
Sweden
Sweden , officially the Kingdom of Sweden , is a Nordic country on the Scandinavian Peninsula in Northern Europe. Sweden borders with Norway and Finland and is connected to Denmark by a bridge-tunnel across the Öresund....
. The distance to Sweden from the coast at Hørsholm is ca. 17 km to Landskrona
Landskrona
Landskrona is a locality and the seat of Landskrona Municipality, Skåne County, Sweden with 28,670 inhabitants in 2005.-History:The city of Landskrona was founded at the location of Scania's best natural harbour, as a means of King Eric of Pomerania's anti-Hanseatic policy, intended to compete...
or ca. 9 km to the Swedish island of Ven
Hven
Ven is a small Swedish island in the Öresund strait, between Scania and Zealand . It is situated in Landskrona Municipality, Skåne County. The island has 371 inhabitants and an area of . During the 1930s, the population was at its peak, with approximately 1,300 inhabitants...
.

Hørsholm and the neighbouring town Rungsted (which is part of Hørsholm Municipality) has an average income per household among the highest in the country - a fact also strongly reflected in the price of housing in the area. Wealthy households are attracted to Hørsholm by its comparatively low income tax rate, proximity to forests and the sea. Moreover, the commuting distance to central Copenhagen remains reasonably short.

Hørsholm municipality was not merged with other municipalities on January 1, 2007 under the nationwide Kommunalreformen ("The Municipal Reform" of 2007).

Hørsholm was the site of the infamous Hirschholm Palace
Hirschholm Palace
Hirschholm Palace, also known as Hørsholm Palace, was a royal palace located in present-day Hørsholm municipality just north of Copenhagen, Denmark...
, which served as the summer retreat for King Christian VII
Christian VII of Denmark
Christian VII was King of Denmark and Norway and Duke of Schleswig and Holstein from 1766 until his death. He was the son of Danish King Frederick V and his first consort Louisa, daughter of King George II of Great Britain....
and his court in 1771, when his consort, Queen Caroline Matilda
Caroline Matilda of Wales
Caroline Matilda of Great Britain was Queen of Denmark and Norway from 1766 to 1772 and a member of the British Royal Family.-Early life:...
, gave birth to her child by Johann Friedrich Struensee
Johann Friedrich Struensee
Count Johann Friedrich Struensee was a German doctor. He became royal physician to the mentally ill King Christian VII of Denmark and a minister in the Danish government. He rose in power to a position of “de facto” regent of the country, where he tried to carry out widespread reforms...
, Princess Louise Augusta. The castle, referred to as the "Versailles of the North", was neglected after that fateful year and torn down by Frederick VI
Frederick VI of Denmark
Frederick VI reigned as King of Denmark , and as king of Norway .-Regent of Denmark:Frederick's parents were King Christian VII and Caroline Matilda of Wales...
, the King's son, in order to provide building materials for Christiansborg Palace
Christiansborg Palace
Christiansborg Palace, , on the islet of Slotsholmen in central Copenhagen, is the seat of the Folketing , the Danish Prime Minister's Office and the Danish Supreme Court...
, which had burned down in 1794.

Local museum Hørsholm Egns Museum ("Hørsholm Local Museum") has a display dedicated to the palace and its fate.