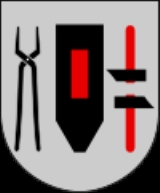 The arms is represented with a dukal coronet. Blazon: "Argent a Sledgehammer Sable with Core Gules between Tongs of the second and two Hammers adorsed in pale of the second handled Gules.". It was granted in 1660. Since 1974 Härjedalen Municipality uses the same coat of arms, but without the coronet.

Four-fifths of the province is situated above 500 metres of altitude, constituting a part of the Scandinavian mountain range. Sweden's highest village Högvålen
Högvålen
Högvålen is a former village near Tännäs in the Härjedalen province of Sweden. At 835 metres above sea level, it is Sweden's highest continuously inhabited village. It have lived around 100 persons there at most, now only a few persons lives there. Högvålen is surrounded by mountains and big mires...
, at 835 metres, is also within the province.

Härjedalen is strange in that there are no cities at all. The only village of even modest size is the market town Sveg
Sveg
Sveg is a locality and the seat of Härjedalen Municipality in Jämtland County, Sweden with 2,633 inhabitants in 2005.The Swedish author Henning Mankell was brought up in Sveg, and it is the setting for his crime novel Danslärarens återkomst .- References :...
, which used to be the administrive center of the province.

The provincial flower is the Arctic violet. It is prominent on high altitudes in Europe, and is also found in the Alps
The Alps
The Alps is a 2007 American documentary film about the climbing of the north face of the Eiger in the Bernese Alps by John Harlin III, son of John Harlin who died on the same ascent 40 years earlier...
.

Jämtland and Härjedalen were originally provinces of Norway
Norway
Norway , officially the Kingdom of Norway, is a Nordic unitary constitutional monarchy whose territory comprises the western portion of the Scandinavian Peninsula, Jan Mayen, and the Arctic archipelago of Svalbard and Bouvet Island. Norway has a total area of and a population of about 4.9 million...
. Härjedalen came under the Norwegian king ca. 1100. After the Treaty of Brömsebro in 1645, Härjedalen, along with Jämtland, were ceded to Sweden. Until 1660 is a common spelling Herjedalen and Jemtland.

The first population of Härjedalen is estimated to have migrated here some 9,000 years ago. The population lived from hunting and fishing, close to the inland ice which by then had started to melt. Ruändan, in the Flatruet mountains in northwestern Härjedalen, is the location of a large site of rock paintings. The rock paintings at Ruändan consists of some twenty figures depicting people, bear, moose and reindeer. The rock paintings was first reported in 1896 and are estimated to be over 4000 years old.

According to one legend, Härjedalen is named after a powerful Norseman who had to flee east from the Norwegian court of king Halfdan Svarte
Halfdan the Black
Halfdan the Black was a ninth-century king of Vestfold. He belonged to the House of Yngling and was the father of Harald Fairhair, the first king of Norway.-Biography:...
after killing one of the king's men with a horn. Thereafter he was known as Härjulf Hornbrytare (lit. "Härjulf the Hornbreaker") For a time he entered the service of the Svea King Anund
Anund
Anund, Swedish: Bröt-Anund meaning trail-blazer Anund or Anund the Land Clearer; alternate names Brøt-Anundr or Braut-Önundr , was a legendary Swedish king of the House of Yngling who reigned in the mid-seventh century...
, until he eloped with that king's sister, Helga, and together they disappeared into the remote location in the region eventually named after him. Today a statue stands dedicated to them in the village of Lillhärdal
Lillhärdal
Lillhärdal is a locality situated in Härjedalen Municipality, Jämtland County, Sweden with 365 inhabitants in 2005....
. Härjulf and Helga were the foreparents to the Icelander, Bjarni Herjólfsson
Bjarni Herjólfsson
Bjarni Herjólfsson was a Norwegian explorer who is the first known European discoverer of the mainland of the Americas, which he sighted in 985 or 986.-Life:...
, who was the first Norseman to see the "new world" when he was blown off-course whilst on a voyage to Greenland
Greenland
Greenland is an autonomous country within the Kingdom of Denmark, located between the Arctic and Atlantic Oceans, east of the Canadian Arctic Archipelago. Though physiographically a part of the continent of North America, Greenland has been politically and culturally associated with Europe for...
. His boat is the one Leif Eriksson
Eriksson
Eriksson is a common Swedish patronymic surname meaning "son of Erik", itself an Old Norse given name. There are other spelling variations of this surname such as Erikson, Ericson, Ericsson and Erixon...
acquired about 15 years later for Leif's famed landing on Vineland
Vineland
Vineland is a 1990 novel by Thomas Pynchon, a postmodern fiction set in California, United States in 1984, the year of Ronald Reagan's re-election...
.

A large portion of Härjedalen residents emigrated to America, principally to Northwestern Minnesota
Minnesota
Minnesota is a U.S. state located in the Midwestern United States. The twelfth largest state of the U.S., it is the twenty-first most populous, with 5.3 million residents. Minnesota was carved out of the eastern half of the Minnesota Territory and admitted to the Union as the thirty-second state...
during the late 1800s.

The name Härjedalen, from Old West Norse Herjárdalr, literally means the "Valley of the Härje river". A Latin
Latin
Latin is an Italic language originally spoken in Latium and Ancient Rome. It, along with most European languages, is a descendant of the ancient Proto-Indo-European language. Although it is considered a dead language, a number of scholars and members of the Christian clergy speak it fluently, and...
ized transliteration is Herdalia, although that name is hardly encountered in the English language
English language
English is a West Germanic language that arose in the Anglo-Saxon kingdoms of England and spread into what was to become south-east Scotland under the influence of the Anglian medieval kingdom of Northumbria...
today. More prominent are derivations such as Herjedalen or Haerjedalen. The more prosaic explanation of the name says that the word her or har just means "mound of stones" and refers to stones in the river Härjån.

Härjedalen was historically divided into districts.